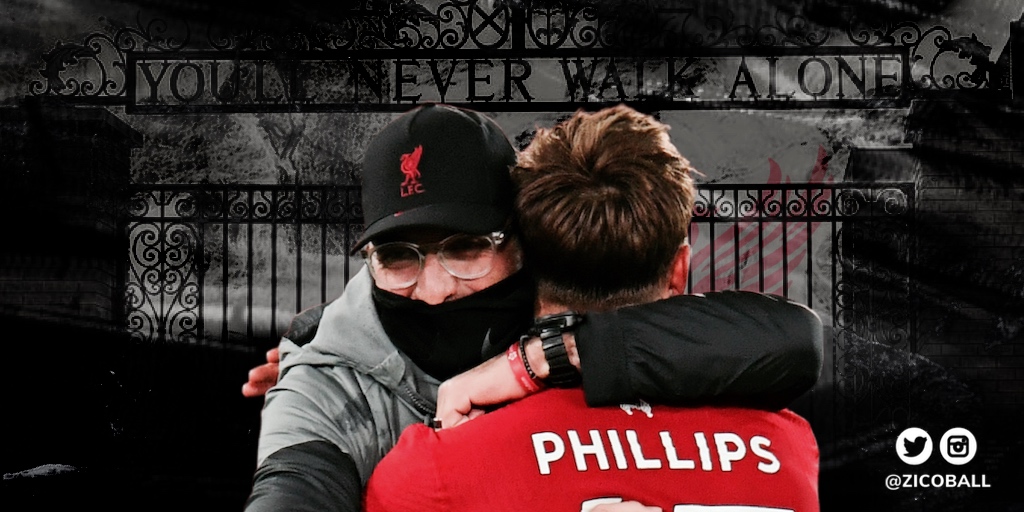 Fifth choice centre-back Nathaniel Phillips and Joe Gomez stand at the heart of Liverpool’s defence, only seven games into the Premier League season. West Ham the visiting opposition, and Sebastian Haller the chosen one to spearhead The Hammer’s attack. The former Eintracht Frankfurt striker’s stuttering start to life in London meant that he wasn’t the first choice for his team either, albeit a little further up the pecking order than one half of Liverpool’s centre-back pairing.

It was one of those moments that football often produces – an unexpected platform for an opportunity trained so voraciously. The chance to start in a Premier League fixture at Anfield, something so craved, but something seemingly out of reach given the array of talent ahead of him.

Ask Nat Phillips before the start of the season how many opportunities he expected in Liverpool red this campaign, and the proud elite sportsman in him would have fancied a few domestic cup games. The reality is, even that goal may have been out of reach. Phillips’ failed deadline-day switch to Swansea looked to confirm a limited number of senior appearances on Merseyside this campaign.

Virgil Van Dijk, Joe Gomez, and Joel Matip: the three glaringly obvious first-team players who would all defend Liverpool’s crown this season. The rest, as is required and expected from all top-flight squads, were there to deputise when called upon, and feature in the so-called lesser fixtures.

A trip to Lincoln City in the EFL cup posed a first-round task billed as a fixture of similar ilk. Clearly not as prestigious as its Premier League cousin, but one that needed to be dealt with nonetheless, offering a chance to play those chomping at the bit within squads who may not feature in the league. Rhys Williams partnered the experienced Van Dijk at centre-half, and the 19-year-old’s senior bow ended with a 7-2 win. Sepp van Der Berg, the young Dutch central defender, made the substitute bench.

A defensive crisis was around the corner for The Reds as I’m sure you’re aware. The much-publicised loss of Van Dijk, Liverpool’s talisman at the foundation of the team’s spine, prompted a developing book of question marks surrounding a defensive unit so difficult to break down only one year earlier.

Alisson Becker and Van Dijk were accompanied by Joel Matip in the treatment room, as Fabinho filled in at centre-half and performed tremendously considering the change in position. Liverpool supporters’ blushes were saved, and a ready-made South-American replacement, who had proved his defensive capabilities the previous season, looked to be doing so again.

Joe Gomez and Fabinho were pencilled in on the team-sheet for Sheffield United’s pay-per-view visit to Anfield. It wasn’t perfect, but it got the job done. It seemed like a somewhat impressive band-aid solution while Matip worked his way back to fitness, and it was one which supporters could live with. After all, this is the fanbase who have a vivid memory of Lovren and Martin Skrtel scrapping their way through games.

It grew worse for Liverpool and Fabinho’s hamstring in particular. One must wonder what thoughts were swirling inside Nat Phillips’ head when watching Fabinho hobble off the pitch with Rhys Williams replacing the make-shift central defender on his television screen. Of course, a professional athlete would likely not wish harm to another, especially one within the same team. Still, it’s only natural to assess personal standing in the light of unfortunate advancements close to home, right?

Phillips, completely overlooked for Liverpool’s Champions League squad this season, would have been forgiven for thinking that the Brazilian’s injury would still have little impact on his first-team hopes.

After all, before Lovren left for Zenit St Petersburg, it could be argued that Phillips was Liverpool’s seventh choice centre-back, with Fabinho, Hoever, and Williams fancied ahead of him.

Five clean-sheets in 16 starts for Stuttgart was enough to aid the German outfit over the line to automatic promotion from Bundesliga 2. Phillips’ loan spell in Germany can be viewed as successful and full of invaluable experience, but one which would unlikely muscle its way toward first-team opportunities at Anfield. Yet again, the same would have been said for Preston-born Rhys Williams following his 26 appearances for Kidderminster Harriers. The Carpetmen, playing in the sixth tier of English football, is rarely a trodden path en route to Champions League football, but that is precisely what transpired in Liverpool’s victory over FC Midtjylland.

Then, Nat Phillips’ big moment came, and it was to the surprise of many. Perhaps the stars had aligned for the 23-year-old. Not only was his side struck down with absentees, West Ham too faced the wrath of the footballing gods. In-form striker Michail Antonio was ruled out of Phillips’ debut Premier League fixture, after registering three goals in six games.

Pablo Fornals’ tenth-minute opener silenced any claims that without Antionio, West Ham would turn toothless in front of goal. Phillips wouldn’t get a much-coveted clean-sheet, but he would deliver a man of the match performance.

Phillips delivered a display to be proud of and assured onlookers that he was ready to grasp the opportunity in front of him with both hands. The centre-half dominated aerially and gobbled up near enough everything which was played off the ground – finishing with a game-high of six headed clearances. The crosses from wide into Haller were made null and void by the centre-back, who cleared Liverpool’s lines time and time again.

Phillips remained calm under pressure, was solid in the tackle, and rarely looked flustered in possession. It was a performance indicative of an old-school, no-nonsense Premier League defender.

Jurgen Klopp hailed Phillips post-game during his assessment of his performance, “I’m really pleased for him, he deserves it more than anybody.

“He’s a brilliant guy, smart guy, intelligent, everything. He knows everything about himself as a footballer.

“He kept it really simple tonight, which was important for us.

“He’s not easy on the eye, he’s not Messi, but who cares? In the air, he’s a monster! He was incredible.

“He was vocal on the pitch and spoke really well. He made the challenges; he was there and was aggressive.

If Phillips’ monstrous display was enough to have Klopp purring at the end of the West Ham fixture, then his selection of Rhys Williams and Diogo Jota to start in Bergamo would have set pulses races even more so. The Portuguese forward had clawed his way into the starting line-up, demoting Roberto Firmino to the bench in what was billed as Liverpool’s most challenging game in Group D. Williams’ presence meant he would feature in all three of the Champions League group stage fixtures, a feat which was entirely unexpected during the run-up to the new Premier League season.

It was Jota’s night. He had announced his arrival with aplomb before the trip to Italy, but his showing against Atalanta really set his stall out. He was sharp, showed a turn of pace, was tricky in and around the box, and served up a clinical edge in front of goal – the goalscoring prowess the once brimming Anfield terraces recognised from Sadio Mane and Mohammed Salah.

Michael Edwards had found another gem. The recruitment team at Liverpool had struck gold again. Jota’s signing represents just how well equipped the Premier League champions are to compete on all fronts. The 5-0 scoreline didn’t flatter Liverpool, but props must be given to Williams and Gomez in central-defence.

From National League North to lining up in the Champions League against Duván Zapata; it seemed like a straightforward transition if judging just by performance. Williams was composed, assured in possession, and had very little work to do in the first-half especially.

Liverpool have waltzed through a period expected to floor them. Losing key figures in key positions will always be debilitating to the make-up of a team, especially when the best defender in the world sits on the treatment table.

Liverpool face Manchester City next, and if they can produce a result against Pep’s side, it will make this injury-ravaged run nothing short of remarkable.

Will Phillips hold his place against Manchester City if Matip is deemed fit to feature? It’s unlikely, but the depth of choices at Klopp’s disposal has proved far superior to that of recent years. Will Jota keep his place while Firmino sits on the bench? It will be difficult to drop him now, but this is the kind of headache Klopp wants – the type of squad equipped to muster a trophy haul.