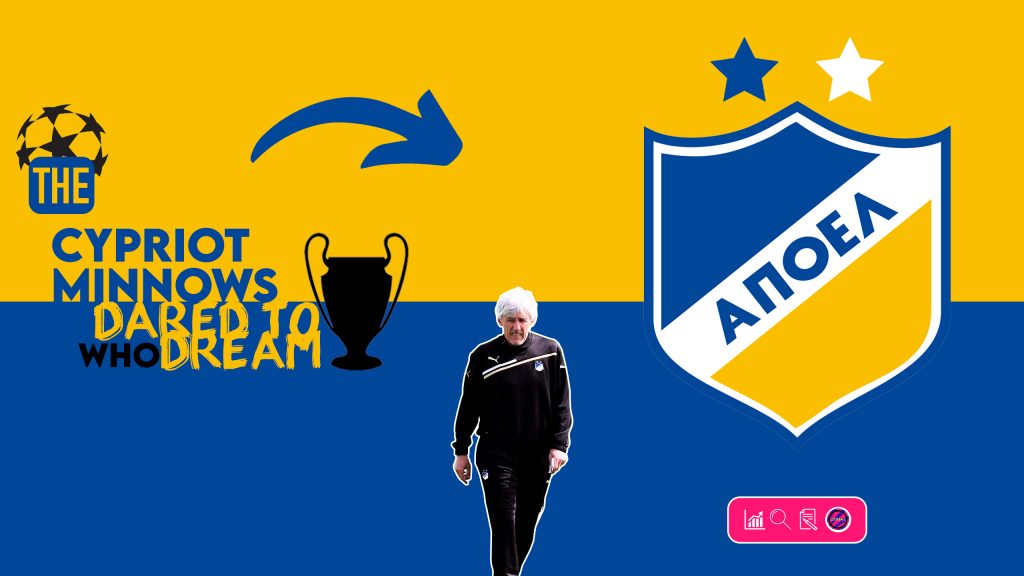 Possession is nine-tenths of the law, or so we’ve been told. Never has that sentiment mattered less in professional football than in recent years when counter-pressing and quickfire counter attacks are the tactics-du-jour, relegating mind-numbingly boring possession football, and sideways passing to yesterday’s news.

Before Leicester upset the bookmakers by winning games without the ball, just under a decade ago, a team from the Cypriot capital tore up the script in European’s flagship competition. Proof that solid organisation, effective planning, and a squad pulling in the same direction is enough to propel a team past even the most dominant of opponents.

APOEL Nicosia surprised and shocked many during their run to the last eight of the Champions League in 2011/12. The fairytale campaign started for APOEL away in Korçë, eastern Albania, in June of 2011.

The minnows who had no business rubbing shoulders with Champions League regulars would journey from the earliest stages of qualifying. APOEL would become the first, last, and only Cypriot side to make the quarter-finals of the Champions League. To this day, they stand as the last European minnow to swim their way upstream to the knockout rounds.

The first qualifying round featured only four sides; one each from San Marino, Malta, Luxembourg and Andorra. APOEL Nicosia began their Champions League campaign at the second earliest possible juncture, playing their first game of the season before most European sides had returned for pre-season training.

A 6-0 aggregate win over the Albanian champions in the second qualifying round was followed up with an awkward meeting against Slovan Bratislava in the third. The squad flying Cyprus’ flag eventually overcame the Slovakians 2-0 on aggregate. The drab 0-0 draw away in Slovakia’s capital would seem a world away from results that followed.

During the playoff round, APOEL were tasked with a difficult trip to Kraków to face Wisła. A 1-0 loss would need to be overturned back in Cyprus if they were to repeat their successes of three years prior, and make it to the group stages.

A comfortable 3-1 win at the GSP Stadium in Nicosia provided the springboard into group G. Drawn against Russian oligarchs Zenit St Petersburg, European Cup royalty in FC Porto, and Ukrainian champions Shakhtar Donetsk. For APOEL, the aim was to prove they belonged in such esteemed company, and could compete.

The Cypriots would return home from all three away trips with a share of the spoils, failing to drop a single game to more respected European competition. As results would pan out, APOEL entered their final group game knowing their passage into the knockout rounds was secured.

APOEL lost their final group game at home to Shakhtar but would top the group nonetheless, putting the icing on the cake and ensuring they avoided a last-16 tie with Bayern, Barcelona, or Inter.

Ivan Jovanovic: captain of the ship

Head coach, Ivan Jovanovic, and his APOEL side, broke new ground by topping their group and earning a spot in the knockout stages. A two-legged tie with Olympique Lyonnais of France awaited the men in yellow.

APOEL’s head coach had returned for his second shot at managing in the capital. He had suffered a tumultuous tenure at the club during his initial shift in charge. After clinching the league title in his first stint, he found himself out on his ear the following year, after both players and fans revolted against him.

Despite his difficult first period at the helm, Jovanovic was being offered a second chance, and with it a stability not often found in Cypriot football. The manager laid praise at the feet of his chairman numerous times during the 2011/12 season, praising the zero-interference policy from Phivos Erotokritou.

In his second spell, Jovanovic leads the way to the Champions League group stages, making APOEL only the second Cypriot side to reach that stage of the competition, after Anothorsis Famagusta in 2008/09.

Two seasons before the fabled 2011/12 European run, the club performed admirably in their Champions League debut. Despite finishing last in their group, they only narrowly missed out on a Europa League spot via harsh tie-breaking criteria that involved a Simão Sabrosa away goal.

Narrow one-goal losses home and away to Porto, and a 1-0 defeat at home to Chelsea were compounded with admirable points home and away to Atletico Madrid, and a 2-2 draw at Stamford Bridge. The following year, APOEL were eliminated from the final Europa League qualifying round at the hands of Getafe after an extra-time equaliser from Cata Diaz. Jovanovic was building something.

“We’ll continue to dream; Why not?”

In the 2011-12 campaign, APOEL’s average attendance loitered around the 10,000 mark. Their achievements in the league and their exploits on the continent were down to acute financial policy, effective tactical nous, and expert planning.

This isn’t a club with the ability to throw vast amounts of money at a problem in faint hopes of success. There were no sizeable television deals, no hefty transfers fees. APOEL and Ivan Jovanovic proved to a European audience what could be achieved with limited resources.

Jovanovic stuck to his coaching principles throughout the group stages, deploying a compact 4-4-2 formation; a low block, making them difficult to break down, alongside rapid counter-attacking upon winning possession. A formula that would prove popular for other underdog sides in following years. Leicester, anyone?

APOEL may have had the lowest budget in the competition during their Cinderella season, but it didn’t stop them competing with some of Europe’s finest at the time.

A win over Lyon in the first knockout round was a perfect storm of both their collective mindset and careful tactical approach. APOEL lost the first leg 1-0 away from home at the Stade de Gerland with thanks to a fine finish from Alexandre Lacazette.

APOEL took the lead early on in the return leg when Gustavo Manduca stabbed home in the 9th minute. The tie went to penalties and APOEL would advance to the quarter-finals following heroics from their Greek stopper Dionisis Chiotis.

After the game, goalscorer Gustavo Manduca, spoke of the club’s mentality having reached such a lofty peak, “Every team is bigger than us and has more history than us, but we’ll enjoy the games, and we’ll continue to dream. Why not?”

It’s clear Jovanovic had conflicting feelings about their quarter-final tie with Spanish giants, Real Madrid. During the group stages, Jovanovic explained; “For us, for a club from Cyprus, to play in the group stage is like Real Madrid winning the competition.” However, after overcoming Lyon in the first knockout round, APOEL were given the toughest possible draw. An away trip to play the previously mentioned, at the Bernabeu.

The Spanish Capital for APOEL Nicosia

Jovanovic spoke of the tie with some resentment; “After a long and extremely difficult effort since the second qualifying round till today, we all expected something better, more luck in the draw.”

Jovanovic had clearly come to terms with the fact his side’s European dream would end with a quarter-final appearance. Despite the commendable achievement of making it that far, it was abundantly clear he would have liked the footballing gods to be more lenient.

For some, just the chance to face Real Madrid is a dream come true. For a character like the pragmatic Ivan Jovanovic, it was all about winning.

Jovanovic’s rigid, measured, and monastic approach to coaching was paying dividends. His extensive research into opponents also bled into the officiants. In March 2012, Jovanovic took it upon himself to watch every game refereed by Undiano Mallenco, the official for their last-16 tie with Lyon. Jovanovic scoured highlights of La Liga games that season to provide a solid base of information for his players on what they could perhaps get away with, and what they may not.

So prepared was he for every eventuality that he instructed his goalkeeping coach, Goran Gumic, to watch footage of every possible Lyon penalty taker from the past three years. Only once during the eventual shootout did goalkeeper Dionisis Chiotis dive the wrong way.

Comparing the resources and playing staff of APOEL and Real is like comparing apples and oranges. APOEL had pieced together their starting eleven at a cost of just over £1.3million, a stark contrast of the £500million star-studded Real Madrid starting line-up.

APOEL’s record signing, Ailton Almeida, cost the club a meagre £600,000. A similar fee has been reported as Gareth Bale’s weekly wage at Real Madrid, highlighting the gulf between the two clubs. Almeida would finish the season as APOEL’s second top goalscorer. The top-scorer mantle would be taken by their Argentine hitman Esteban Solari, brother of Santiago, who enjoyed a five-year career at Real Madrid before moving to Internazionale.

Despite failing to make it past Real in the quarter-finals, APOEL provided a blueprint for the little man across the continent. They offered up a model for smaller clubs to follow. Come prepared, with a solid game plan, and a tremendous work ethic. With these three areas covered, there’s no reason why smaller European clubs can’t take on the big boys and their riches.

The APOEL squad was composed of a rainbow of nations; Cypriots, Greeks, Macedonians, Paraguayans, Argentineans, Portuguese and Belgians. Nicosia is famously a divided city split between Turks in the north, and Greek-Cypriots in the south. The ‘green line’ acts as the divide, running along the banks of the Pedieos River.

However, during the Champions League campaign of 2011-12, there were no such barriers in the APOEL dressing room. APOEL Nicosia’s first appearance in the group stage of the Champions League saved the club from financial meltdown. On their second bite of the cherry, their aim was sporting success, not economic prosperity. Since APOEL’s journey to the last eight of the Champions League in April 2012, only four sides outside of Europe’s top five leagues have reached the same stage.

Although, it’s clear that all four club’s had much deeper pockets equipped to adapt to European competition. No less of an achievement, but a nod towards the Cypriots who did it on a shoe-string budget in comparison; Galatasaray in 2012/13, Porto in 2014/15, Benfica in 2015/16 and the lauded Ajax side of the 18/19 season.

Their journey to the knockout rounds of the Champions League was no fluke, no happy accident. APOEL Nicosia remain the last small fish to upset the odds and swim so far upstream.