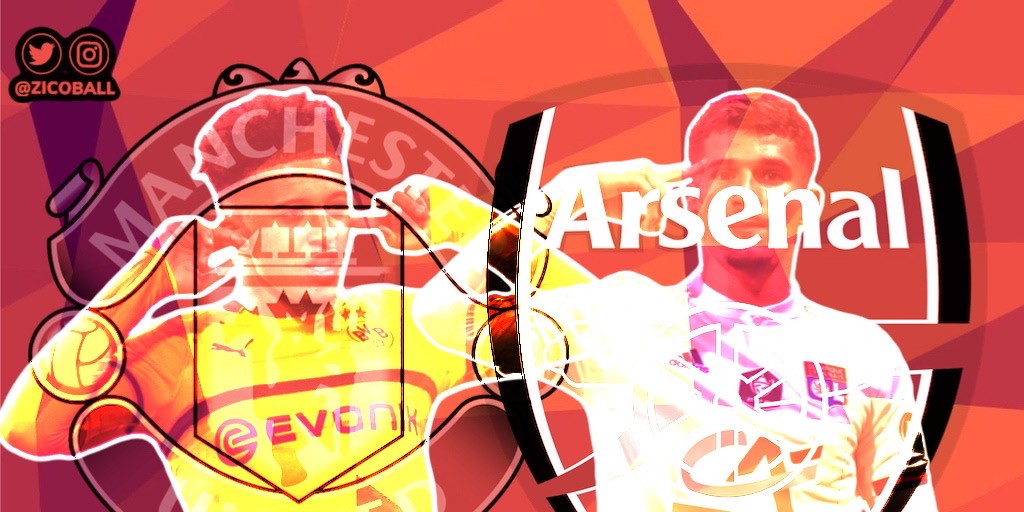 So this is it. After what has felt like an endless summer transfer window due to the strange circumstances we find ourselves in, we are now into the final week.

Premier League clubs only have until Monday (October 5th) to do business with their foreign counterparts, whilst an additional window allowing them to strictly do business with EFL clubs stays open until October 16th. And, to put it bluntly, a few football clubs still have a hell of a lot of business left to do.

That statement is true for no club more than two of the Premier League’s elite; Arsenal and Manchester United.

Arsenal have done some smart business this summer, bringing in Willian on a free transfer and Dani Ceballos on another loan deal, but the fans have been crying out for more. As things stand, Brazilian centre-back Gabriel Magalhaes is the only notable big-money signing for Mikel Arteta’s side, which has caused some frustration amongst the Arsenal faithful.

Meanwhile, Manchester United, who were also in desperate need of some quality additions, have made just one signing so far in the shape of Ajax’s Donny van de Beek. Unfortunately, whilst it’s obvious that van de Beek will provide additional quality in midfield, his arrival doesn’t really address any of the key issues in Ole Gunnar Solskjaer’s starting eleven.

So, with just one week left to go for these two giant clubs to fix the glaring holes in their respective squads, what is on the agenda for them?

As previously mentioned, Arsenal have already plugged a few holes in their team with some nice additions, but it’s clear for all to see that they still look extremely light in central midfield. And this is a situation which could potentially get worse before it gets better, with the likes of Lucas Torreira, Matteo Guendouzi and Mesut Ozil seemingly all available to anyone willing to pay decent money for them.

With quality midfield options already thin, and several players potentially on the way out, it’s no surprise that Arsenal’s primary targets are both in that area.

Atletico Madrid’s Thomas Partey has been their main target in midfield for almost a year at this stage, and Lyon’s Houssem Aouar rocketed himself right up to the top of Arteta’s shortlist after a string of world-class performances in last season’s Champions League. And there really is a genuine possibility that they land both players.

My information from an extremely reliable source suggests that Arsenal are in the very final stages of agreeing a deal for Aouar, with senior officials at the Emirates expecting that their latest bid will be enough to tempt Lyon into selling.

The French club’s CEO, Jean-Michel Aulas, has publicly stated that players could leave the club, and they have until Friday to do so. He has also made it clear that Aouar would be allowed to leave for somewhere between €40million and €50million. Given the fact that Arsenal’s latest offer is right around that region once add-ons are taken into consideration, they believe Aulas will accept the proposal. They are also aware that Lyon are on the verge of sealing a deal for AC Milan’s Lucas Paqueta, who plays a similar role to Aouar, which signals that the Ligue 1 side are already preparing for life after their talisman. This deal will almost definitely get across the line.

The situation with Partey is slightly more difficult, due to the added complications of an active release clause and Atletico Madrid’s interest in Lucas Torreira.

Diego Simeone is keen to land the diminutive Uruguayan, but Atletico only want to commit to a loan deal. Arsenal, on the other hand, want to sell the player so they can immediately reinvest the money into Partey’s release clause. Arsenal have informally proposed various structured deals, including a loan with an obligation to buy, and a player-plus-cash part-exchange deal for Partey. Despite Arsenal’s flexibility on the deal, Atletico retain their stance of “pay his release clause or look elsewhere.”

At this stage, this situation with Partey/Torreira is essentially a chess match, and neither side wants to concede. Thankfully for Arsenal, though, Torreira does still have various offers on the table from Italy. If Arsenal can find another buyer, then they can either completely remove Atletico from the equation, or force them to change their stance on a permanent deal for Torreira. Either way, his sale is crucial to landing Partey, and this one will most likely rumble on right up until deadline day.

Another player heavily linked to Arsenal is Wilfried Zaha. He has been continuously linked throughout the past few transfer windows, but a move has never materialised. To cut to the chase, my latest information suggests that any deal for Zaha is completely dead. Crystal Palace were willing to let him go for just £30million earlier in the window, but his dramatic increase in form has made them quickly reconsider their stance. Arsenal will not consider him now his asking price has increased.

Now onto Manchester United, who have been faced with an equally frustrating transfer window so far.

The Red Devils’ window has been littered with several disappointments. From the outside looking in, it seems that every time they show any concrete interest in a player, that player moves elsewhere. Now, of course, I understand that agents will often use Manchester United’s famous name in order to drum up media attention for their clients, but it has been well documented that plenty of these stories had some legs.

Although fans understandably won’t like to admit it, Manchester United were definitely in the race for several big-name players this summer, and Donny van de Beek is the only one they have managed to snare so far. Thiago Alcantara was probably the most notable name to choose a move to another club when he signed for Liverpool, but they also missed out on Jude Bellingham to Dortmund, Sergio Reguilon to Tottenham and Gabriel Magalhaes to Arsenal, to name just a few.

On the bright side, though, it looks like Solskjaer is finally about to get another signing through the door. My latest information suggests that Porto left-back Alex Telles is on the brink of signing for Manchester United, in a deal worth around €25million. The player has already told friends and teammates that he is set to leave the club, and it looks like it’s only a matter of time before he makes the switch to the Premier League.

Telles looks like an excellent signing for Manchester United, in my opinion. Luke Shaw has regularly looked off the pace during his time at the club, and his performances this season so far have been poor to say the least. Left-back is one of the areas where Solskjaer definitely needed to strengthen during this window, and Telles would be a considerable upgrade.

Another player heavily linked to United over the past few days is Watford’s Ismaila Sarr, with rumours of a £40million approach beginning to surface in the media. The last update I received on Sarr’s future suggested that Aston Villa had made a significant breakthrough in discussions to take the winger on an initial loan deal, and I haven’t heard anything to contradict this since. Although the interest from United could be completely genuine, it may also be a situation like I mentioned earlier, where an agent is just trying to drum up further interest in his client. Time will tell on that one.

The winger that Manchester United really want is, of course, Borussia Dortmund’s Jadon Sancho. The young English star has been central to probably the biggest transfer saga of the window, and I am convinced it isn’t going to go away any time before deadline day. Manchester United will table another bid for Sancho. No doubt about it.

All throughout the window – basically from day one – my most respected source of Manchester United information has been firm on his stance that the club will do absolutely everything in their power to sign Sancho, and he will ultimately become a United player. Earlier in the window, he also went as far as saying it’s practically a done deal. Clearly, that turned out to be incorrect at the time, but let’s not forget there is still a week left for this move to materialise.

There is a growing feeling of discontent amongst United fans, and the club knows it. The owners, the executives, and the manager all know full well that their global brand is being directly impacted by increasing negativity from disgruntled fans on social media, and they also know they need to do something big to put a stop to it. I believe a move for Sancho will be their go-to.

Regardless of how all of these particular transfer sagas play out, we’re in for a hell of a week. Get ready for highs, lows, twists, turns, and an absolute fuck-tonne of fans tweeting “announce ____” at their club’s poor social media admin.