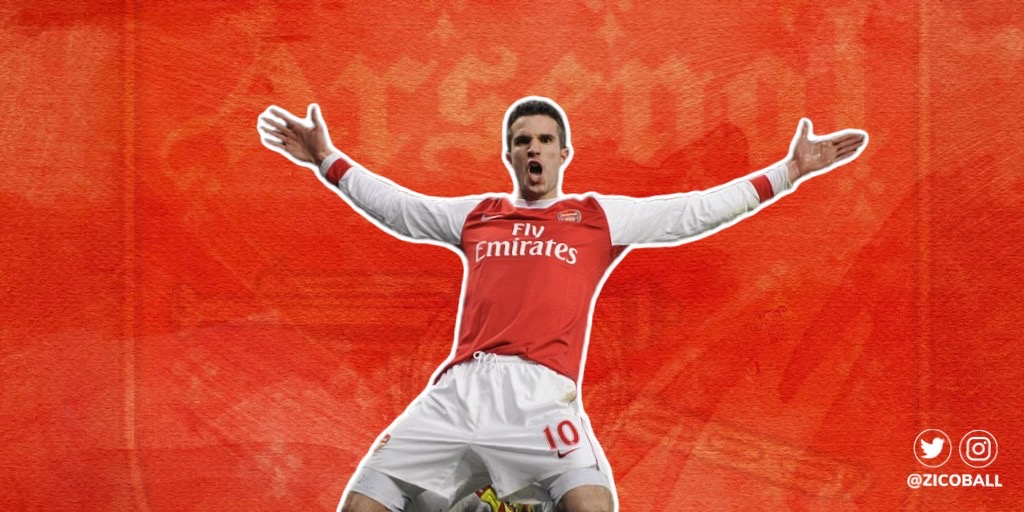 Arsenal shareholder, Alisher Usmanov, once confessed: “The greatest achievement of Arsène Wenger is to have created two teams: One that now plays for our rivals and the one that is trying to be among the best in the Premier League.”

For a number of years, players became stars within their own right and then vacated Arsenal. It happened all too often. Players who had flown the coop would famously go on to win trophies and further their careers at rival clubs, but things may have changed for The Gunners. Mikel Arteta’s revolution is truly underway. The contract extension of star-forward Aubameyang and Willian’s arrival from Chelsea is evidence that Arsenal are heading in the right direction.

Pre-Arteta, things became stale during Arsene Wenger’s final years in North London, and he continued to see the cycle of big players leaving the club. This article will highlight the talent which left Arsenal.

The Dutch hitman spent eight years at Arsenal. He joined arch-rivals Manchester United in 2012 at 29 years old, and with a lot left in the tank. The Dutchman was tired of fighting for a top-four spot in the Premier League, and had his sights on a league crown instead. Van Persie was frustrated with Arsenal’s trophy drought and the regular departures of important players.

Van Persie, when explaining reasons for leaving, proclaimed; “From my side, and Arsenal as well, there are no hard feelings. There were certain elements which were vital to me that we had a different view. That is life. Nobody is angry at me, and I’m not angry at them (Arsenal)“. Well, Robin, there were hard feelings, and the Arsenal fans were absolutely furious.

Van Persie was crucial for United as the Red Devils won the league title in 2013. The striker netted 30 goals in his debut season at Old Trafford as he finally won his first Premier League title. Arsenal fans were left wondering what could have been had he stayed. Arsenal later signed Özil and Alexis Sanchez, offering up a dreamy hypothetical attacking outfit with RVP, and surely a league title. What was the final nail in the coffin for Arsenal fans would have been when Van Persie returned to The Emirates Stadium for the first time. He came as a champion of England and Arsenal players had to give him a guard of honour. Ouch.

Of all the players mentioned in this article, Vermaelen is the least glamorous name. His path from Arsenal to instant success means he deserves his spot in this article, wedged in between RVP and Cashley Cole. Maybe he’s not the most glamorous, but the Belgium international went on to win the treble in his first season with FC Barcelona, after just one solitary FA Cup win as Arsenal captain. In Spain, he ended up with a Champions League winners medal, a Copa del Rey, and the Spanish league title in just one season in Catalonia, while rarely kicking a football. Talk about a difference in class.

Arsenal fans would be right in saying that Vermaelen didn’t earn his medals, and maybe they are right. It was the trio of Lionel Messi, Luis Suarez and Neymar Jr who won the treble. The Belgian did not feature during Barcelona’s European campaign, not even once.

This was a sore one. Ashley Cole was only 25 years old and in the prime of his career when he joined Chelsea. What was painful for onlooking supporters was that Cole left the team after Arsenal’s hierarchy refused his demands for an improved salary. Cole held talks with Chelsea without informing Arsenal and ended up at Stamford Bridge in 2006. England’s left-back went on to have a superb career at Chelsea and won several trophies, most notably the 2012 Champions League.

Ashley Cole won one league title, four FA Cups, a League Cup and the Europa League in blue, while Arsenal suffered a considerable amount of pain.

Cole has recently said that although Arsenal fans may call him ‘Cashley Cole,’ he is proud of his medal collection.

This is probably the time Arsenal fans might want to refrain from reading this article. But it did happen, no matter how much you want to deny it. The King did leave, and he left to win the Champions League. Even in 2007, the fee £16.1 million paid by Barcelona was criminally low for a player like Henry. The Frenchman was 29 years old at the time, and he couldn’t wait any longer to win the Champions League. He had talked about leaving in 2006 but was assured by Wenger of leading a serious assault for European glory. Arsenal did reach the Champions League final, only to suffer heartbreak in Paris against his soon-to-be employers. Henry left for Spain in a classic move of ‘if you can’t beat them, join them.’

Regardless, there is still love for Henry amongst Arsenal fans. When the Frenchman returned for a brief spell in 2012, he was given a King’s reception, and there were only cheers and positivity for The Gunners legend.

Nasri left after just three years at Arsenal, as he had probably seen enough. He was only 24 at the time he joined Manchester City in search of trophies, with the tremendous amount of cash offered to him likely a reason as well. Nasri has since taunted Arsenal in several interviews over their lack of desire to win trophies. The Frenchman has been labelled a mercenary and is ridiculed from the stands whenever he returns to North London.

One thing that can comfort the Arsenal fans is that even though Samir Nasri has won trophies at Manchester City, they also showed him the door. His ego and attitude have cost him at both club and international level.

Another Arsenal left-back, and another one who left far too early. Clichy was 25, the same age as Ashley Cole, when he joined Manchester City in 2011. The Englishman won two League titles and a league cup in Manchester. Clichy reasoning for leaving was how he was sick of losing every year and simply wanted to win trophies. Arsenal fans also labelled him a mercenary, but you can see the pattern here.

Just like Henry and Van Persie, Arsenal captain Cesc Fabregas left Arsenal after eight years to win silverware. Fabregas broke into the first team at an early age and was handed his debut at 16, and many consider him the reason for Patrick Vieira’s departure. Fabregas was only 24 when he joined FC Barcelona in 2011. He desired to play for the Catalan giants where he developed as a teenager, with his hunger for trophies underpinning his willingness to move.

In Spain, Fabregas won a La Liga title, one Copa del Rey, two Supercopa de Espanas, one UEFA Super Cup and a FIFA Club World Cup with FC Barcelona. If all this wasn’t enough, after leaving Barcelona, he signed for arch-rivals Chelsea. The Spaniard won two Premier League titles, one league cup and one FA Cup at Chelsea.

Last but definitely not least is Arsenal’s former number 7. Sanchez was a statement signing for The Gunners. For years, Barcelona took players from Arsenal, but now, the roles had reversed. Sanchez did win two FA Cups and a Community Shield but left as he wasn’t happy with Arsenal’s system. The three consecutive 5-1 losses against Bayern Munich didn’t help either.

Sanchez went to Manchester in January 2018, just like Van Persie, Clichy, Sagna and Nasri before him. But as Arsenal fans love to point out, he was not so successful at Old Trafford.

So, we’ve demonstrated that a plethora of players have left Arsenal for pastures new, citing the want to win trophies as the reason to vacate. Before Arteta’s arrival, Arsenal were underachievers with fans still waiting for their first Premier League title since 2004.

Arsenal, along with Manchester United, dominated England in the early 2000s. However, the methods of Arsene Wenger were failing, as did the Unai Emery experiment.

In hindsight, Arsene Wenger stayed at the club for too long. He did walk away with honour, after achieving so much, but players leaving the club in search of trophies is not a healthy cycle for a football club – especially for a historic club like Arsenal.

Aaron Ramsey has already won a league title with Juventus, and Ozil also looks to be heading away from the club, albeit via a different set of circumstances. If Arteta’s managerial prowess can influence an influx of trophies, Arsenal’s star man vacating cycle may just be over. Keeping Aubamayeng onboard despite interest elsewhere is the perfect starting point.