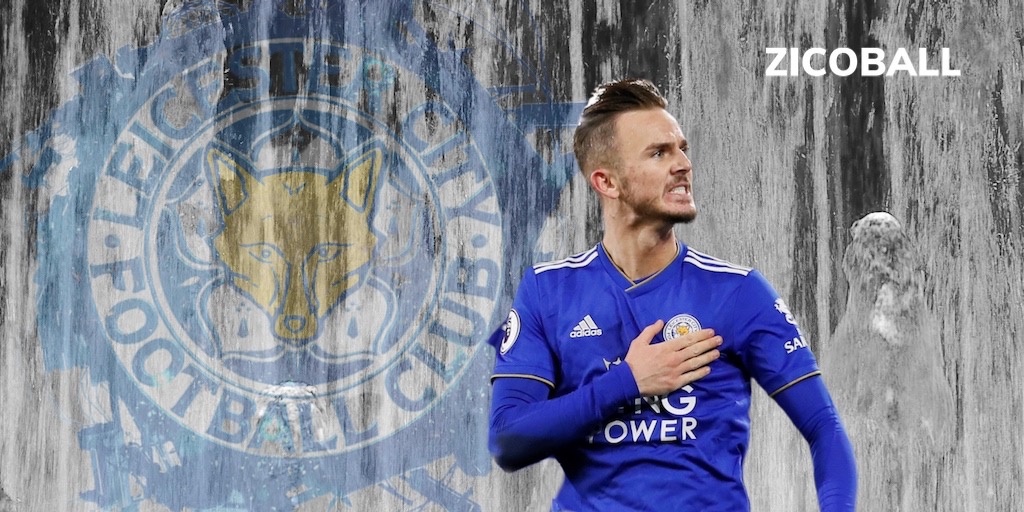 The boy from Coventry is now one of the most in-demand players in the Premier League. The way he has adapted to life in the top-flight and caused a headache for Gareth Southgate has drawn interest from the top sides.

It is expected that one of the big six Premier League clubs will be sniffing around the playmaking midfielder come the end of the season. James Maddison has also been linked with Real Madrid, Paris Saint-Germain, and Bayern Munich in recent times, but will Leicester part with their star asset?

Maddison joined Leicester City for £25m in 2018 from Norwich City. His current contract ends in 2023 while his market value is £50m according to Transfermarkt. A fee which you would expect to reach similar heights to Manchester United’s transfer for Harry Maguire and the proposed £70m+ that the Foxes want for Ben Chilwell.

Maddison is a central attacking midfielder, best suited on the left of a three-man midfield, in a 4-3-3 setup. This season, the 23-year-old has scored nine goals in 35 games in all competitions. His output of six goals and three assists in 28 league games is already an improvement from the seven he scored in the entirety of last season. Maddison is a very confident young man, and it shows in the way he plays.

The Leicester midfielder is a standout dribbler which attracts attention from the opposition and often leads to Maddison being fouled. This season, that total stands at 3.1 fouls per game. Maddison’s most prominent strengths come in the form of his long-range shooting and tremendous technical ability. Since the beginning of last season, Maddison has scored eight times from 18-yards out or further.

With Maddison’s versatility, he can be deployed as a winger or a number ‘10’. A trait which Brendan Rodgers reveres and hailed during his time at Liverpool working with his fluid attack of Luis Suarez, Daniel Sturridge, Raheem Sterling, and a Phillipe Coutinho.

Crossing and playing through balls is also a strong plus for the young Englishman. The Leicester man specialises in finding space between the lines for his long-range shots or the chance to create goalscoring opportunities for teammates. He has averaged 2.5 shots and 2.5 key passes per match in the league this season.

Despite his age, Maddison is a quick learner which is highlighted in his versatility. Under previous Leicester coach, Claude Puel, Maddison was used as a ‘10’ behind the striker. However, Brendan Rodgers has also used him as an attacking midfielder, or as a wide forward in a 4-3-3.

The 23-year-old has delivered consistently, but his most effective contributions come when he is allowed to roam from the number ‘8’ position to find gaps in opposition defence.

To add some balance, Maddison is a footballer who is still learning and improving and does come with his weaknesses. At 5ft 9 inches, Maddison is weak in aerial duels and struggles with his defensive contribution. In Premier League games this season, he is averaging just two tackles and 1.3 fouls per game.

Maddison averages a modest 0.4 interceptions, a lowly 0.2 clearances per game whilst getting dribbled past 1.5 times.

Maddison will have to improve the defensive aspect of his game if he is to become a world-class number ‘8’. Rollback the years to what Steven Gerrard had on display at Liverpool. If Maddison can drag the defensive side of his game up to a level close to his on-field offensive output, that kind of all-roundedness will put him a step above.

The Leicester man, who seems to be flourishing and enjoy his time at his present club, has been heavily linked with Manchester United since the summer of 2019.

Is Old Trafford the most suitable option for him? The Red Devils already have Paul Pogba and Bruno Fernandes. Both are similar to Maddison in terms of playing style and the emergence of Scott Mctominay is a massive bonus for United. When fit, Mctominay is one of the first names on the team-sheet.

However, if Pogba leaves, then Ole Gunnar Solskjaer may come after Maddison.

A transfer to the red part of Merseyside would make sense for both parties. Liverpool are heavily dependent on their front three of Mohammed Salah, Roberto Firmino, and Sadio Mane for goals.

Furthermore, Liverpool’s fullbacks; Trent Alexander Arnold and Andrew Robertson, are their chief creators in Klopp’s system, highlighting the lack of a recognized playmaker in the middle. Naby Keita could yet fill that role, although he has failed to harness his Bundesliga form so far in England. So, Maddison’s promise of goals and assists from midfield might be an intriguing option for the soon-to-be Premier League Champions.

Pep Guardiola’s Manchester City is another brilliant option for the highly-rated Englishman. David Silva will leave City at the end of the season with the MLS or a switch back to Valencia looming.

Maddison could easily play alongside Kevin de Bruyne in City’s attack-minded midfield. Maddison has played much more first-team football than Phil Foden, and has that edge on the talented City youngster. The City boss has said on numerous occasions that Foden is a supreme talent who will get his chance. Silva’s exit will likely allow Foden out of the shadows, in-turn fending off any move for a midfielder of similar offerings.

Does Maddison fancy a challenge abroad? His agent could well field calls from the French Champions. Paris Saint Germain have lacked creativity and goals from midfield this season, and with Maddison’s consistent performances, this move is not as unlikely as you would think.

The best option for me is Arsenal. Think about it; The Gunners lack a quality box-to-box midfielder who can get goals to boot.

Dani Ceballos is only on loan from Real Madrid, and Matteo Guendouzi’s qualities lack Maddison’s dribbling and shooting capabilities. With Mikel Arteta using the 4-2-3-1 at Arsenal, Maddison can be deployed behind the front three or even out wide from the left, allowing Aubamayang to play in his favoured position upfront.

Maddison’s energetic playing style and versatility is exactly what Arsenal and Arteta need.

Although there will be many suitors, Leicester are unlikely to sell Maddison for anything less than £60-70m. Brendan Roger’s team are fighting for Champions League football, and given the importance of Maddison to their playing style, Leicester will take some convincing.

Arsenal may not be willing to spend that much on one midfielder following the Nicolas Pepe transfer which is yet to yield any real returns. The Manchester clubs, PSG and possibly Liverpool, dependant on outgoings, will have the resources to splash the cash.

Staying at Leicester might not be the worst idea in the world for Maddison if the Foxes can qualify for the Champions League next season. A European campaign as the main man in midfield will do wonders for his experience and his footballing CV and stature in the game.

Regardless of where Maddison is playing next term, one thing is for sure for a team that is lucky enough to have him: they will witness fast, direct, attacking football. Maddison possesses the talent, commitment, and versatility to make a real impact in the Premier League for years to come. Similarly to world-class players in the sport today, his abilities are also underpinned by an elite cocksure mentality to have a long and successful career.