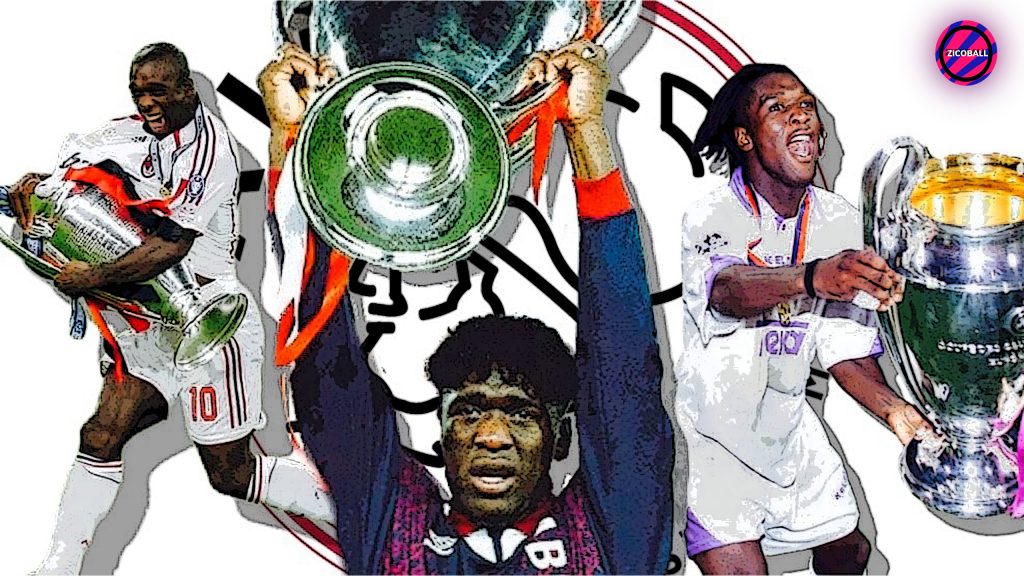 Clarence Seedorf is a man of many talents. Fluent in six languages, for one, a holder of a master’s degree in business, and the only football player to have won the Champions League with three different clubs. Four medals from UEFA’s showpiece domestic event hang inside Seedorf’s trophy cabinet in his Milanese home, alongside a CV boasting several impressive previous employers.

European super-clubs, including Real Madrid, Internazionale, AC Milan, Sampdoria, and Ajax, were blessed with the presence of the progressive ball-carrying midfielder.

The boy from Suriname

Born in Suriname, the smallest sovereign state in South America, it would be the Oranje jersey of the Netherlands that Seedorf pulled on at international level.

A visit to Suriname today would offer you the chance to visit The Seedorf Stadion. A €4m footballing arena built by your highness Clarence Seedorf, footballing royalty and man of the people.

The 3500-capacity stadium aimed to develop football in a third-world country. Seedorf left his birthplace for the Netherlands at two-years-old, but would regularly return to visit his grandfather and extended family.

Within the realms of domestic football, he would win the lot. Seedorf, who now runs a restaurant in Milan with his wife, triumphed in two Champions League campaigns with AC Milan, two in the Spanish capital, and what is arguably the most impressive in Amsterdam with Ajax.

PSG’s George Weah took the goalscoring mantle in the 1994/95 Champions League with seven. Ajax’s Jari Litmanen finished one goal behind the current 25th president of Liberia. Nevertheless, it was a feat that would go some way to deciding the destination of the Champions League trophy that season.

Amsterdam’s best, placed in Group D, faced AC Milan, AEK Athens, and Casino Salzburg in the group stages. A confident 2-0 showing in the Netherlands against Milan started the campaign with a bang.

This Ajax team knew they were good. They had talent, youthfulness, and that all-knowing swagger that accompanies a group at the height of its craft.

The exuberance, enthusiasm, and hunger were harnessed and spearheaded by head coach Louis Van Gaal. A set of names that would reverberate around the world of football for a generation.

Ajax’s trip to Milan produced the same scoreline as their first meeting. 2-0 to the visitors, with the would-be Liverpool man again on the scoresheet. Litmanen and Ajax were gaining traction. In fact, this trend would continue throughout the competition.

The Ajax ensemble surged towards the final as the youngsters eased aside Hadjuk Split 3-0 after a goalless draw in Croatia, allowing Ajax to advance past the quarters.

Again, a 0-0 draw away from home in Munich set up an enthralling return leg in Amsterdam. Ajax and Bayern Munich played out a 5-2 thriller. Two goals right before half-time, and Litmanen’s second strike after the restart, confirmed Ajax’s flights to Vienna. The semi-final second leg was never in doubt. The Dutch outfit was purring.

It would be AC Milan in the final. Group D’s runners-up would have their shot at revenge. Two losses in the group stage had left a sour taste for the Italian giants.

Clarence Seedorf, at 19, started the Champions League final in central midfield. Such was his impressiveness at a tender age.

It was tight and nervy, as just shy of 50,000 watched events unfold. Notably, Patrick Kluivert entered the field of play in the 70th minute, replacing Jari Litmanen. A masterstroke from Louis Van Gaal.

By this time, Kanu had replaced Seedorf just before the hour mark. Fifteen minutes after the substitution, Kluivert sent the Champions League back to Amsterdam. The 18-year-old consequently handed his status and the future careers of his teammates a seismic boost. Ajax ran out 1-0 winners. A fairytale in Vienna.

The Ajax men finished seven points clear of Roda JC in the Eredivisie. Kluivert was on hand again, finishing as Ajax’s top goalscorer in the division with 18 goals. At 18-years-old.

Clarence Seedorf and his Search for Champions League Silverware

Seedorf’s career continued on an upward trajectory. His performances at such a young age had him in the crosshairs of Europe’s best. Consequently, the Bernabéu would follow a year in Serie A with Sampdoria. Clarence Seedorf the Galactico.

Three years after his infamous Ajax triumph, he won it in the white of Madrid in the 1997/98 season under German coach Jupp Heynckes.

Juventus played the role of opposition in a City Seedorf knew well. The Amsterdam arena, a stretch of turf the Madrid midfielder became accustomed to during his early years, oversaw a 1-0 Spanish win. Former Yugoslavia international Predrag Mijatović netted the winner in the 66th minute.

There would be two Dutchmen on the field that day. Both would play 90 minutes in the midfield engine room, and both would impress. The two friends had lifted the coveted silverware together already; Seedorf and Edgar Davids.

Roberto Carlos, Raúl, and Fernando Hierro are just three names that ensured Real Madrid were crowned champions of Europe. Seedorf had two to his name and counting.

Clarence Seedorf’s next Champions League trophy lift came for the Italians, who Ajax swept away on three occasions eight years prior. No wonder the boy from Suriname was on their shopping list. Andrea Pirlo, Gennaro Gattuso, Rui Costa, Rivaldo, Andriy Schevchenko, and Fillipo Inzaghi called the San Siro their home at the time, somehow pipping the riches that resided in Madrid for Seedorf’s previous Champions League triumph.

A squad widely regarded as one of the best. Clarence Seedorf arrived from fierce rivals Internazionale for a smidge over £20m, lifted a Champions League trophy, and then endured the wrath of Rafa Benitez’s Istanbul comeback in 2005.

Epitomising Seedorf’s willingness to work hard and scrap for every ball, AC Milan fought to earn revenge the following season. Consequently, Clarence Seedorf and his esteemed colleagues snatched the Champions League final away from the Merseyside club in Athens. An Inzaghi brace, pegged back slightly by Dirk Kuyt’s 89th-minute consolation goal, secured silverware.

Athens was the signalling for the fourth and final Champions League victory for Clarence Seedorf. Four European titles with three clubs, spanning a 22-year playing career.

The boy from Suriname is royalty. European footballing royalty.