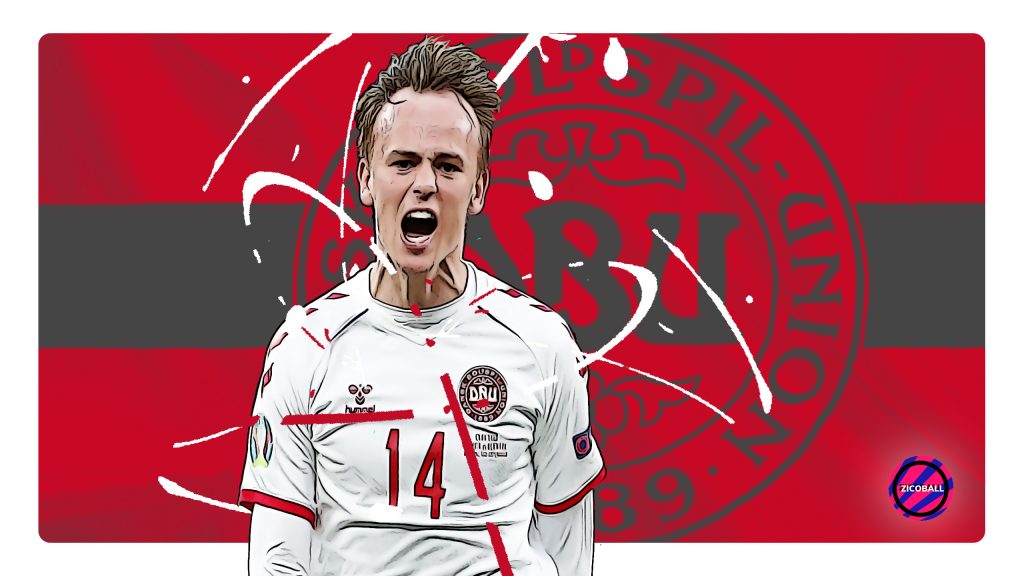 Handed the most unenviable task in replacing Christian Eriksen in Denmark’s second Euro 2020 fixture, 20-year-old Mikkel Damsgaard would be forgiven for wilting under the pressure of an expectant nation. With Eriksen watching on from a hospital bed after channelling his Danish fight on the corner of a football pitch in Copenhagen, it was a passing of the baton of sorts, stemming from the most unfortunate of circumstances.

Given the quality of performances from Damsgaard in the remaining two group stage games for Denmark, it is no wonder reports of admirers for the Sampdoria man are circling and rearing their head.

Damsgaard comes across as an effortless footballer. One of those footballers whose output on the pitch seemingly comes so easy to them. Against Belgium, Damsgaard stood out amongst his Danish counterparts. The Sampdoria winger was keen to receive the ball. He boasted a yard of pace and close control to resist the press and retain possession in tight areas of the pitch. The nonchalance in how he glided around the pitch was perhaps something expected from within the Belgian squad.

Damsgaard levelled up his involvement for Denmark in the final group game against Russia. Almost as if a young Christian Eriksen had picked the ball up in the final third. Damsgaard, side-on to the goal and approximately 30-yards out, takes his first touch to open up play and face himself up to goal. With that one touch, the phase of play changed in an instant, and Denmark looked threatening. The next touch was deft enough to evade Georgiy Dzhikiya, who was left flat-footed as Denmark’s number 14 glided to his left.

The third and final touch was enough to catapult him to hero status in Denmark. The quickness in which he grabbed the opportunity to shoot and the lack of backlift put a stop to the Russian’ keeper’s hopes of a clean sheet. Consequently, Damsgaard and Denmark were on their way. The eventual 4-1 scoreline confirmed their place in the Round of 16 against Wales.

Is a Mikkel Damsgaard Transfer on the cards?

Sampdoria president Massimo Ferrero has semi-jokingly gone on record by saying that Damsgaard’s spectacular goal against the Russians is impacting on his market value.

Gazzetta Sampdoriana quotes Ferrero; “Did you see that Damsgaard goal? I’ll tell you it’s fair price, today at least 30 million. But if he scores again, he will reach 40!”

Mr Ferrero will likely be rubbing his hands together after the acquisition of Mikkel Damsgaard from FC Nordsjaelland. The Superligaen side netted €6.7m for selling one of their academy’s best. Damsgaard’s fee was the second-most expensive purchase from the Danish outfit behind Emre Mor.

The young Dane has featured regularly for Claudio Ranieri’s side in his first season in Serie A. Although chipping in with two goals and four assists, the left-winger started on only 18 occasions whilst appearing from the bench a further 17 times. Nevertheless, this is no mean feat for a teenager in a side with seasoned professionals. Additionally, Damsgaard’s arrival came during worldwide turmoil. His big European move disrupted by the pandemic, offering no opportunity to visit loved ones and lead a normal life.

Pencilled in as a left-winger anywhere you’ll find on the internet, but that doesn’t paint the clearest picture. Instead, Damsgaard prefers to drift centrally. Here, he will create and operate in central spaces, exactly what we saw for his goal against the Russians.

Damsgaard registered 0.48 goal involvements per 90 minutes for Sampdoria in 2020/21. A total not gone unnoticed amongst scouting departments on the continent. Learning his trade under Ranieri slowly but surely, the 2021/22 season will be his breakout year to announce himself domestically. If a sizeable bid comes in for their Danish talent in excess of £25 million, it should be enough to ensure that his breakout year is away from the city of Genoa.

Where next for Damsgaard?

Interest in Damsgaard will intensify as Denmark’s involvement continues in the competition, and rightly so. However, the Dane was attracting suitors long before the start of the European Championship.

In February, reports of Premier League interest was concrete. A head-turning start to life with Sampdoria saw to that. Fast-forward four months, and after two mightily impressive Denmark showings, Tottenham, Leeds, West Ham, and Southampton will have a fight on their hands.