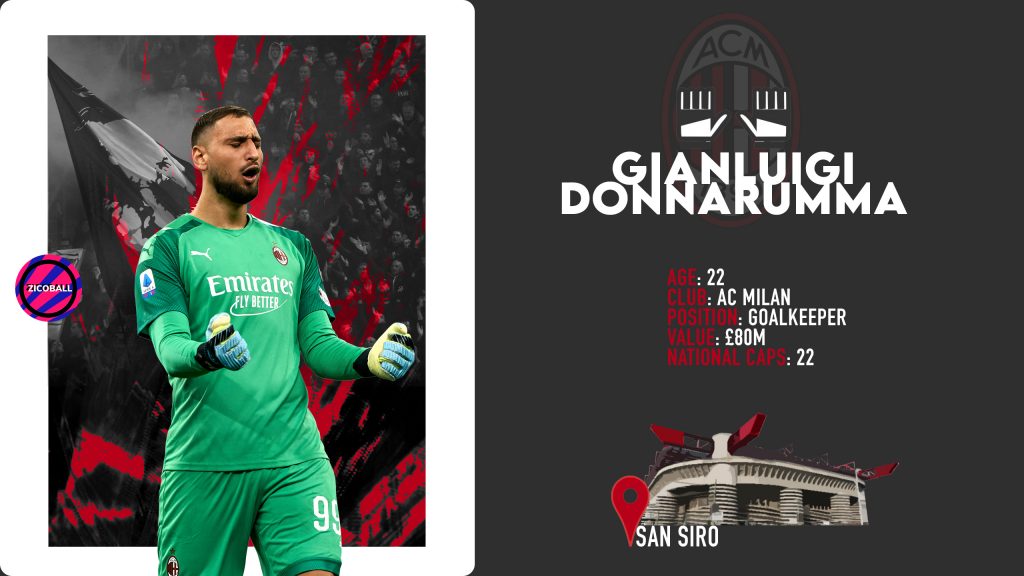 Sat behind a robust, second-placed, Serie A back-four, Gianlugi Donnarumma currently resides in the imposing shadow of Samir Handanovič with nine clean-sheets to his name, one behind the Slovakian.

As the Rossoneri casts an eye towards the Scudetto, it may be easily forgotten that the calming influence between the sticks has only recently turned 22-years-old. Donnarumma, breaking into the AC Milan team at 16-years and 242 days – the second-youngest goalkeeper ever to debut in Serie A – has amassed 227 appearances for the red fraction of Milan.

Comparatively, at 21-years-old, the safest pair of hands in modern Italian football had ‘only’ 186 senior showings for Parma. Now of Juventus fame, Donnarumma’s namesake, Gianluigi Buffon, stands head and shoulders above his compatriots in net as he waltzes through the twilight stage of his career. Nevertheless, that doesn’t mean the next generation won’t steadily chip away at his crown.

Speaking after receiving his first Under-21 call up for Italy at 16-years-old, Donnarumma commented on the man who many now naturally compare him to; “My idol is Buffon, and my dream is to become the first-choice goalkeeper for the Nazionale, following in his footsteps. Everyone would love to have a career like his.”

Consistently unflappable and playing with a maturity far beyond his years, AC Milan’s goalkeeper is the cream of the crop, and his employers are well aware.

Mino Raiola constructed circumstances has led to Donnarumma’s current contract running down, something the hierarchy will want rectifying. If they’re going to keep their man, Raiola is pushing for a €10m per year bumper contract – roughly £200,000 a week – and that, in a nutshell, is why the top players clamour for a working relationship with the Portuguese super-agent.

An annual €7m offer was initially swiftly rejected by Donnarumma’s camp, with Raiola keen to net his client substantially more. As Milan have dabbled in January’s transfer market and brought in reinforcements for a sustained assault on the league crown this season, attentions will now focus closer to home. Raiola wants the shot-stopper to become the second-highest-paid goalkeeper on the planet, behind Manchester United’s David De Gea.

Tying Donnarumma down will be a priority before interest and offers to dwarf his current negotiations land on his lap with the potential of a free transfer away from Italy. Losing their cherished gem for free would be nothing short of a nightmare for Milan, handing Raiola the leverage needed to hike up his potential new contract.

Chelsea hold a long-term interest in Milan’s number 99. There are reportedly still embers of affection, despite bringing in Édouard Mendy to replace Kepa. If there are complications ahead during contract talks and Milan fail to reach an agreement, Thomas Tuchel may find himself with an incoming free agent on his hands in the summer.

All Rosey in January – Reclaiming A Lost Decade

It has got somewhat messy, but that is modern football, and it comes with the territory of working with certain agents. It’s expected that AC Milan eventually coughs up what’s needed, so Donnarumma can concentrate on the next few seasons at his boyhood club.

As Zlatan Ibrahimovic alluded to this season, it is a wonder how Donnarumma, someone with so much talent, has never played Champions League football. Well, it’s within reach this campaign, and it can be reached in style if their noisey neighbours are toppled.

Milan’s January activity captured the signature of free-agent Mario Mandžukić to bolster the forward line alongside Ibrahimovič, Raphael Leão, Ante Rebič, and Brahim Díaz. Torino’s Soualiho Meité and former Chelsea man Fikayo Tomori also came in to help the pack. The tactic was apparent from the powers at the esteemed Italian club; do not let up, keep the momentum going.

AC Milan were sitting pretty at the top of Serie A come the end of January, ten points above Juventus in 5th and two points superior to crosstown rivals, Internazionale. Impressively, they hadn’t budged from top spot throughout their 18 games, showing a relentless nature usually emanating from the Old Lady in Turin.

Donnarumma was 11-years-old when AC Milan last lifted the Scudetto. It was the club’s 18th top-flight triumph. If it was foreseen to be their last for a decade, uproar would have ensued – rioting in the San Siro terraces, perhaps. It would have been difficult to accept with the talent-laden squad in front of them, including Donnarumma’s teammate Ibrahimovic, Ronaldinho, Robinho, Alessandro Nesta, and Clarence Seedorf.

For a club that had such a stranglehold on Italian football in the nineties, silverware was commonplace. This familiarity has since dissipated with a generation, including the goalkeeper, who view the Scudetto as largely out of reach for their AC Milan.

Donnarumma’s presence would always be pivotal in the hunt for AC Milan’s 19th Scudetto. The Italian, capped at international level on 22 occasions, would undoubtedly see a Serie A triumph as the highlight of an already impressive career.

The Rossoneri’s 3-0 home loss to Atalanta on 23rd January highlighted the magnitude of the challenge ahead. Both Mandžukić and Meité featured for their Serie A debut at the crowd-less San Siro. Gian Piero Gasperini made the most of the hour drive to Milan, guiding La Dea to a resounding victory; the bragging rights momentarily shifted in the Lombardy region.

Three days later, against their increasingly noisy neighbours, Donnarumma’s side fell to a 2-1 loss in a feisty Milan derby in the Coppa Italia. There would be no domestic trophy to accompany the hopes of a scudetto.

Two wins followed, first in Bologna and subsequently at the San Siro in a 4-0 thrashing of Crotone – a brace each for Rebić and Ibrahimović. Milan were seemingly back on track. That is until a shock 2-0 defeat to Spezia set up a mouth-watering tie a week later with Internazionale.

While civilisation is at a standstill in a city famed as the world’s fashion capital, it is instead the football doing the talking. San Siro’s residents locked horns in what many suggested could decide which way the title swung.

Donnarumma conceded three, his teammates unable to muster a reply. A tricky month for the Rossoneri, at this level, could well be enough to rid any dreams of securing 19. I Nerazzurri’s nine-point lead and 11 remaining fixtures across town suggest that AC Milan cannot slip up moving forward. Stranger things have happened, but a shift in momentum in the city seems more unlikely by the week.

The safest pair of hands in Milan will prove the pillar to any title charge. However, boasting ten clean-sheets to his name this season, that tag is at home in Inter’s camp for the time being.