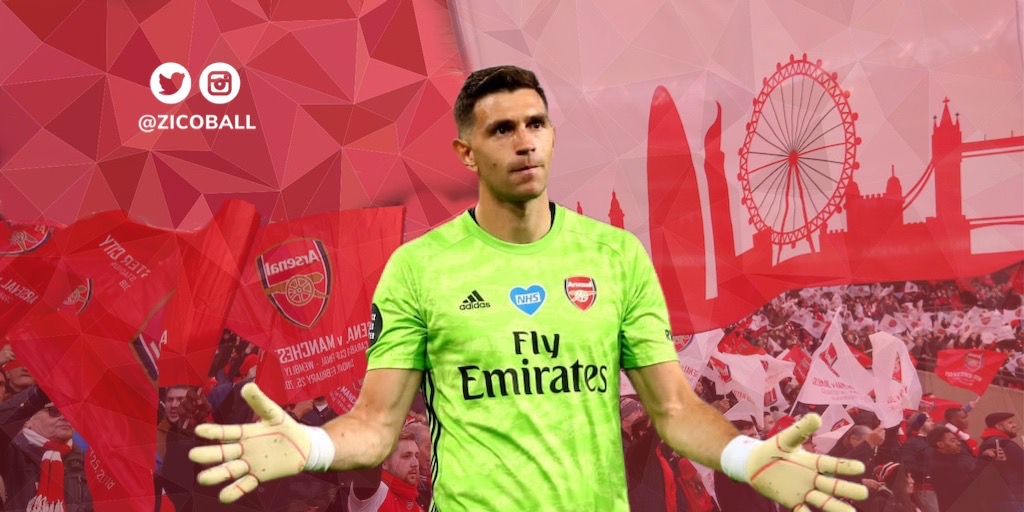 “You know sometimes, football turns on the slightest biscuit of good fortune” – A quote from David Pleat which perfectly sums up Emi Martinez and his time at Arsenal.

In any walk of life, in any profession, it will always prove difficult not being the first choice for something trained and wished so hard for.

As a footballer, and especially in a position where each mistake is magnified and will almost certainly lead to a goal, playing second fiddle can be a real battle. When it comes to goalkeepers, the craziest of the lot, it is a tough task for one to go from sitting on the bench each week, to regularly starting in high-pressure games.

If the first choice makes errors, the likelihood of promoting the backup goalkeeper is relatively low. Clubs will allow the first choice to repent their sins, or delve straight into the transfer market for a replacement.

The above quote is the perfect epitome of the story of Emi Martinez at Arsenal. This is a grafter with a ruthless mentality, the ability to back it up, and most importantly, someone with great patience. Martinez, who in the space of five months went from being a backup option at Arsenal to Argentina’s most expensive ever goalkeeper.

The Trial which changed it all: Emi Martinez to Arsenal

In 2010, a 16-year-old Emi Martinez was beckoned to England for a trial. However, as the man himself revealed to Arsenal’s website, it was never in his plans to join The Gunners:

“I was scared. When I was on the plane, I said to my agent, ‘I am only going to trial and see what happens’. There was no way I was going to leave my family. It was not a poor background, but my family struggled in financial terms.”

“I remember days that me and my brother ate and not my parents. At the time, I was living in Buenos Aires & playing for Independiente, and I would only see my family twice a month because they couldn’t afford the petrol to drive from their home in Mar Del Plata.”

A week after the trial, Martinez received an unexpected call from Arsenal who wanted to sign him for their youth team. As they say, fortune favours the brave, and Martinez decided to take the offer despite the concerns of his family.

“I saw my brother and Mum crying, saying, ‘Please don’t go’, but I had also seen my Dad crying late at night because he could not pay the bills. I had to be brave, so I said ‘yes’ for them.”

However, he had to wait for a decade for the fans even to acknowledge his presence at the North London club, as his path saw more time out on loan than it did at Arsenal. His six loan spells included stints at Oxford United, Sheffield Wednesday, Rotherham United, Getafe, Wolves, and Reading. Until the 2019/20 season, he had only made six league appearances for The Gunners.

With Petr Cech retiring the previous season, 2019/2020 looked to be the year where Martinez, who had recently returned from his loan spell at Reading, was offered a shot to compete for the first team jersey by Unai Emery. Emi Martinez started as the second choice at Arsenal and performed well in cup games, but the opponents weren’t high profile, and Bernd Leno was in the form of his life. Hence, he never imposed himself as a real contender.

A sense of worry surrounded Arsenal fans as Leno was the one consistent in a stuttering Arsenal defence. Question marks shrouded Martinez’s ability to be a number one at a Premier League club. The doubts about the Argentinian were justified, as mentioned earlier, he had been at the club for nearly a decade, the club’s longest-serving player, and he still couldn’t break into the first team.

Arsenal ended up losing the Brighton game, and it didn’t look good for Emi’s first-team chances. The club were reportedly interested in other goalkeepers including Joe Hart, as news broke that Leno’s injury was long term.

On 20th June 2020, in what was an already difficult season for The Gunners, Bernd Leno suffered a nasty-looking injury. The German was on top of his game and played a major part in why Arsenal weren’t further down the table. The number one was stretchered off the field due to a knee injury inflicted by Brighton’s Neil Maupay. With it being outside of the transfer window, Mikel Arteta now only had one way to turn.

However, the man himself was never in doubt of his abilities;

“When Bernd got injured, straight after that, I had to make a lot of saves. I made it look easy because I was confident, I had done the right thing to prepare, I don’t do it week-in, week-out, I do it day by day.”

Little did anyone know, Martinez would lead the Mikel Arteta revolution after putting in some unforgettable performances against the likes of Wolves, Liverpool, Sheffield United, and Manchester City.

You never expect a backup goalkeeper to be as good as Martinez was. Dominant in the air, pin-point distribution, excellent shot-stopping, and perhaps the most important aspect for a modern goalkeeper, comfortable with his feet. The shot he saved from Trent Alexander-Arnold in the dying embers of the Liverpool fixture is one to remember.

On 1st August 2020, he would seal his name amongst the hearts of the Arsenal faithful as he guided them to an FA Cup honour, and ensured that The Gunners wouldn’t miss out on European football. Martinez broke into tears after winning the FA Cup while on a video call with his family, which showed just how much he yearned for this and how much he loved his club. In a sport which is so unpredictable, it was fair to say that Martinez’s glory days were ahead of him.

Martinez’s struggle didn’t end there, as Bernd Leno recovered from injury and regained his first-choice status at Arsenal. The supporters would be sad to see the back of Martinez between the sticks at The Emirates, but the majority of fans, and probably the goalkeeper himself, knew it was likely to happen.

Martinez’s desire to play for his country meant that he needed regular game time in the first team as the first choice. His ambition to pull on the shirt for his country after guiding Arsenal to a Community Shield win at the beginning of 2020/21 season saw him courted by Aston Villa. The accepted fee was £20m, becoming the costliest Argentinian goalkeeper in football’s history.

If Martinez’s career is depicted as a Hollywood blockbuster, his first game as Aston Villa number one would mirror that of real life. The shot-stopper saved a penalty in his first match, winning the hearts of the fans, and is still yet to lose a game.

It looks as if this underdog story will have a beautiful ending as Martinez received a call-up for Argentina, and may well make his national team debut in a World Cup qualifier vs Ecuador on 9th September.

Emi Martinez at Arsenal – a decade of patience.