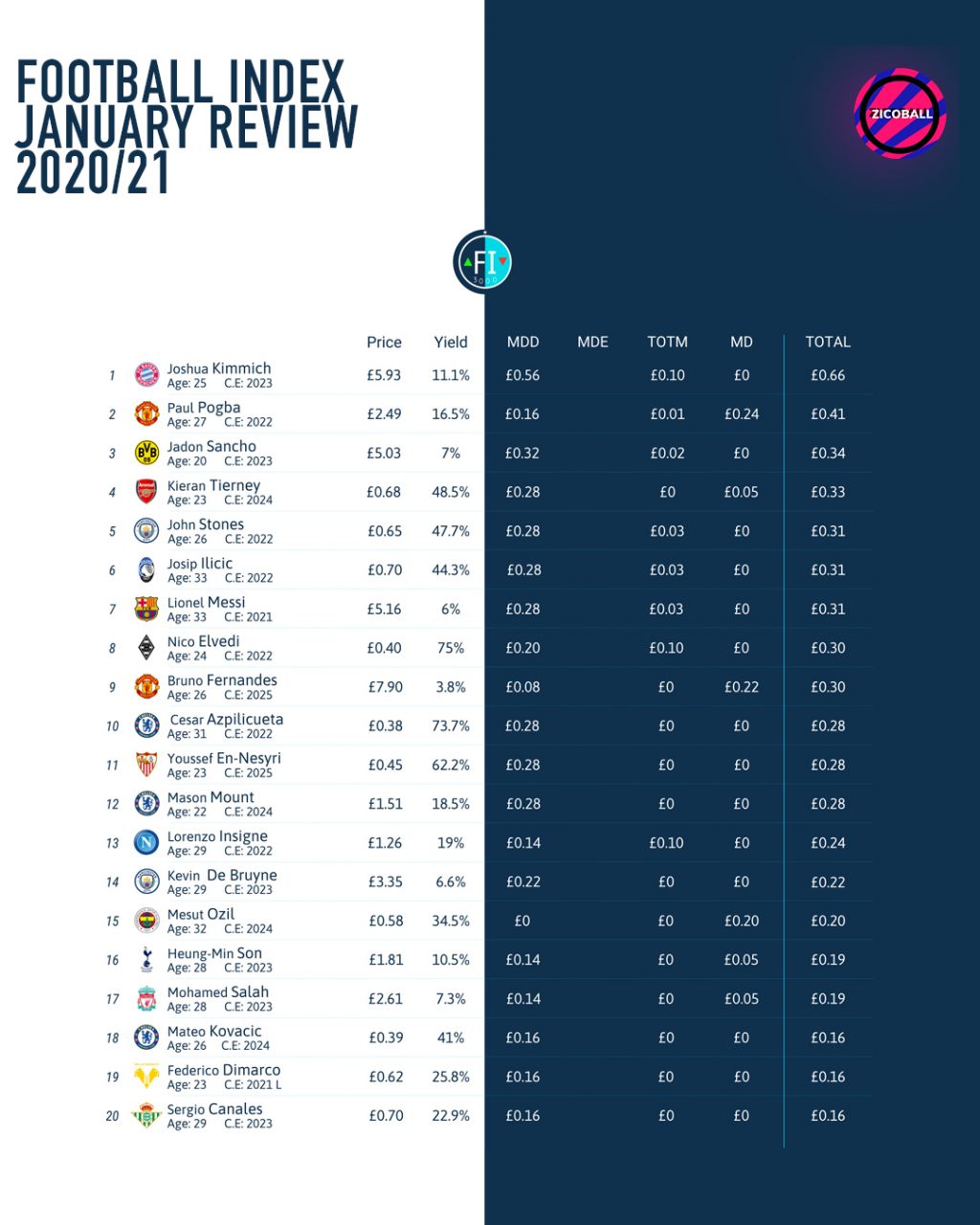 The dividends on offer at Football Index, the lifeblood of the platform, will be at the heart of ZICOBALL’s monthly dividend review throughout 2021.

We have teamed up with @FootballIndex3K to pinpoint the extraordinary returns on offer each and every month, starting with an interesting January.

Here, we’ll pluck out some highlights from the Top 20 Football Index dividend returners for the month, and also cast a look at a player who may deserve your attention in February.

A PB score of 279 against Mainz and a total of 367 at the bottom of the league, FC Schalke, saw Kimmich return the maximum Football Index payout within three weeks of each other. In both fixtures, Kimmich mustered goal involvements to push him towards a dividend win; a goal and an assist at home to Mainz, and an impressive three assists away in Gelsenkirchen.

Kimmich’s penchant for frequent large-scoring suggests that he’ll always be sniffing around the business end of the Team of the Month (TOTM) rankings, and January is no different. Kimmich trumped Josep Ilicic by 145 points, despite playing only 25 minutes more than the Atalanta ‘midfielder’.

Finishing as #1 Midfielder for the month, the German added to his £0.56 PB dividends with an additional £0.10. Using Kimmich’s mid-December price to give an idea of the type of returns available, holders would have witnessed an 11.1% yield if recruited to the portfolio before January.

Such monstrous monthly returns has Kimmich head and shoulders above the rest, including second-place Paul Pogba who totalled a next-best £0.41 in dividends.

The Resurgence of John Stones

Manchester City’s John Stones has been in inspiring form in January; a resurgence back towards the player who earned a move away from Merseyside. City’s Centre-Back has forced his way into Pep’s plans again and has held his own, despite Aymeric Laporte nipping at his heels from the sideline.

On current form, Stones is not only a strong contender for Gareth Southgate’s squad in the summer, but he’s also worth considering from a Football Index perspective.

The one real negative to having Stones in your portfolio is that he’s likely to face constant competition for dividends from members of his own defensive unit each match day. Ruben Dias, Laporte, and the plethora of wing-backs at the Etihad are all more than capable of holding their own on a Gold Day. However, like his teammates, Stones has the scope to return traders dividends when getting on the scoresheet, recently highlighted against Crystal Palace.

Stones opened the scoring in the 4-0 win, grabbing the game-winning goal(GWG) and ending the day with a brace and a PB total of 317. Stones’ lofty figure topped the PB rankings, handing a sizeable return and an enviable yield to owners. From his mid-December price, Stones’ dividend yield (excluding IPD’s) was the second-highest in January on the platform.

Following one central defender to another, Borussia Mönchengladbach’s Nico Elvedi also had a month to remember. Not only did he rack up an imposing PB score like the City man, but the Swiss international went one better and won PB on two occasions.

Elvedi’s two PB wins arrived within three days of each other to the delight of owners. A 270 PB score enough to confirm Star Man on a Silver Day after Elvedi scored the game-winning and only goal in a 1-0 home win to Werder Bremen. Three days later, a 227 score oversaw a top Defender finish and 4p returns on a Bronze Match Day.

The two PB wins in quick succession saw Elvedi’s price spike, and rightly so. The centre-back’s yield for the month dwarfs the rest of January’s Top 20 dividend returners whilst boasting a sizeable PB average for the month at 175.

Having won PB only twice last season, Elvedi has already matched his dividend output from the previous campaign, in January alone.

With a 75% dividend yield (excluding IPD’s) for January, Elvedi’s monstrous month puts Football Index’s potential yields firmly in the spotlight. If Football Index users can cherrypick a player likely to perform in the months ahead, the returns on offer are substantial.

At the time of publishing this article, the former Salzburg man is currently trading at £0.68, with a lowest sell offer of £0.60. We have a feeling that in a month or two, that may seem a bargain.

Hopeful that the Japanese playmaker will be privy to consistent playing time after a deadline day switch to the South coast, Jurgen Klopp spoke of the loan move; “Takumi is an incredible player, and we didn’t give him enough chances, that’s the truth. Southampton makes a lot of sense.”

After impressing in Southampton training, Klopp’s compatriot and Southampton boss, Ralph Hassenhuttl, discussed his new man; “We have with Minamino a fantastic new player. He showed in the first session immediately that he can help us and that gives us all a lift, an emotional lift.”

Expect Minamino to play a pivotal role in Southampton’s final 17 games. The Liverpool loanee will be hopeful of striking up a partnership with Danny Ings and Che Adams, whilst providing the Premier League with a glimpse of the type of form we saw at RB Salzburg in the Champions League.

In February, Southampton play a host of fixtures where they will hope to pick up points, albeit against tough opposition. The Saints’ next five:

The recent injury crisis at St. Mary’s leaves boots on the ground somewhat thin, but it will provide the platform for a consistent run in the side for Minamino.

Don’t hold us to this, but a surprise inclusion in next month’s Football Index Top 20 dividend returners wouldn’t be too much of a surprise here…