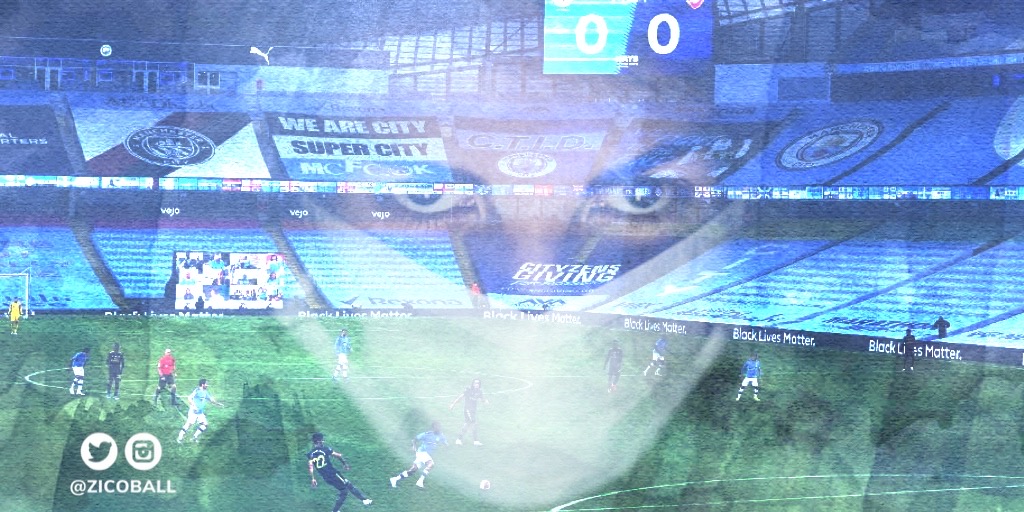 A facsimile of Premier League football returned on Wednesday night. Sheffield United travelled to Aston Villa, and Manchester City hosted an Arsenal side bereft of a win at top-six opposition in five years. Within the confines of the touchlines, the visual aspects of both games were almost entirely as you would expect.

David Silva’s impeccable ability to play on the front foot was everpresent. As was the defensive rigidity from a Blades team charging towards European football, and a comical David Luiz’ ‘disasterclass’ causing Gunners fans to wonder if the last three months were just a fever dream. Away from the pitch was where the obvious differences were felt.

Sky Sports explored options of pumped in crowd noise over their satellite feed, and both City and Villa fabricated fan interaction from the stands in attempts to convince viewers that all is well. Nonetheless, the opening two games lacked any real excitement, intensity or jeopardy. It was football for the xG purists. If you’re in it for the passing triangles, the exploitation of space, and counting the seconds of open play possession, I imagine it was a joy. For me, the severe lack of sporting narrative and genuine ambience left both games to appear as hollow shells, mere husks of bona fide Barclays.

Season ticket holders at Villa Park watched on from their sofas on Wednesday evening distraught at being exiled from the turnstiles as their team’s campaign to avoid relegation resumed. I can imagine many a forlorn glance will have been shifted towards empty seats; seats that for ten, twenty, thirty years had been filled by the same pair of cheeks.

For the habitual fan, whose Saturday revolves around their journey to and from Villa Park, this will have been a shock to the system. But for the passive fan who regularly consumes Premier League football through the television, let’s face it, this was Sky’s bread and butter.

For the fan whose only’ first-hand’ experience of the atmosphere at Villa Park is through a career mode or a Pro Clubs game on a games console, fictitious crowd noise laid lazily over the video feed will have made little to no difference.

An entire generation of football fans, myself included, has been groomed not to notice the lack of fans or palpable atmosphere at these behind-closed-doors games. So familiar are we with synthetic crowd noise dished out through television speakers via FIFA video games. Now that it has bled from virtual reality to reality, it feels natural. That should be worrying.

Different leagues around the continent have offered up different solutions to the headaches of these so-called ‘ghost games’. The Bundesliga began with the authentic sound of silence. If you tuned into Dortmund vs Schalke in late May, you were met with cries from the defence to hold their line, midfield generals screaming man-on, and darting wingers whinging in pain as their ankles were swept from beneath them.

Germany slowly upped the ante by offering the option of synthetic crowd noise through their television feeds, but it was left to the viewers’ discretion. Opt-in or opt-out, the choice is yours. La Liga returned last week with the Seville derby accompanied by CGI crowds superimposed onto empty red seats around the Estadio Ramón Sánchez Pizjuán. The technology is available and easy enough to install. All you need is a soundboard and an operating technician to fabricate the experience of cheers as a goal goes in or the home side saves a penalty.

“We are thinking of this as a televised entertainment spectacle. What we are going to do is make you recall what you are used to seeing when the stadiums are full.” La Liga audiovisual director Melcior Soler told The Athletic. And therein lies the problem. Arguably, football shouldn’t be fabricating atmosphere to show the world it can continue without a live audience.

It should be legitimate, nude and uncompromised, consciously letting the supporters know they are missed; we really are nothing without you.

As Premier League football moves further and further away from the grassroots game every year, it isn’t difficult to imagine a time when match-going fans are seen as superfluous to proceedings.

We could instead see fans replaced by sizeable corporate sponsorship banners we saw in the opening two games of the Premier League restart. Banners which could bring in more revenue than paying match-day supporters.

Once a team makes it to the promised land of the English top-flight, they could have an option of forgoing the feverish support that spurred them on in their rise to the top. Instead, they could favour with shutting down sections of the ground for advertisers who are willing to shell out more than home supporters for prime real estate. Money talks, right?

Imagine the influx of money the Premier League and its twenty clubs would receive with all games televised to the world. 15:00 on a Saturday now the new go-to slot for Premier League viewing. Monday to Sunday, crammed with football as it constantly graces our television sets; like a new-age Coronation Street, swapping the Rovers Return for a silent, fan-less Old Trafford.

Sky and Virgin sports packages flying through the roof as the corporate big-wigs grow fully aware of season ticket holders’ willingness to empty their pockets to lock eyes on their team’s escapades.

Match-going fans have become less and less of a concern to the league and its broadcasters since 1992. A game between Newcastle and Chelsea can be moved at a moments notice from 15:00 to 19:45 without taking into account the last train from Waterloo back up to Tyneside.

According to the latest figures, the price of a beer and a burger at West Ham’s Olympic Stadium will set you back just shy of £15. For reference, a week’s worth of free school meals vouchers begrudgingly divvied out by our current government is worth roughly the same. It’s almost ridiculous to imagine that’s where it ends.

Whether it’s a computer-generated bluff in Seville or cineplex sized fan-cams in Manchester, it’s a novel experience, for now. Hopefully, these fraudulent conditions only last as long as the global pandemic. The worry is that it will eventually become the norm.

Premier League football has already systematically priced out the working-class. Are we just a stone’s throw away from top-flight English football becoming nothing more than an expensive tourist attraction. Are close to making it a polished pay-per-view event, rather than the ritualistic pastime it was, and is, merely clinging to now?

Rehearsed, refined, and pretentious. The footballing equivalent of Hamilton.