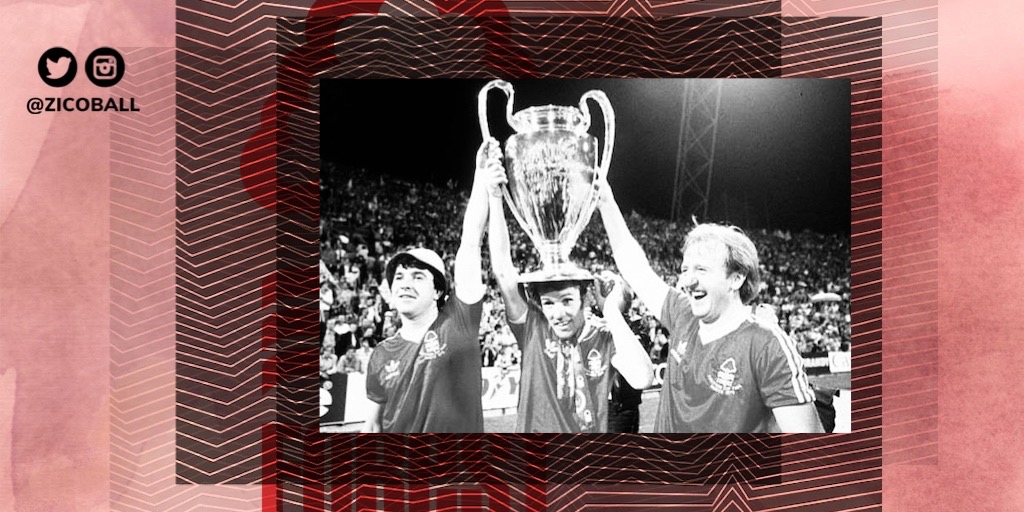 After winning the First Division and League Cup in 1978, Forest were brimming with confidence. Yet, no one expected what was to come. It is well documented that Forest had an easy run-in to the final after beating Liverpool. European powerhouses Juventus were knocked out in the first round by Rangers. Furthermore, Club Brugge, who were beaten in the final the previous season, also lost in the first round to Wisla Krakow.

The next opponents in the round of sixteen were AEK Athens. Forest won a close first-round tie 2-1 and then thumped the Greek side 5-1 at The City Ground, pulling off a 7-2 aggregate scoreline. The cup favourites, Real Madrid, were surprisingly defeated in the round of sixteen by Grasshopper. Alongside Koln of Germany, Forest were now being tipped as favourites to lift the trophy, but Clough made sure his men took each tie at a time.

Next up in the quarter-finals was the Swiss outfit, Grasshoppers. They were relatively unknown in the European cup but of course, promised a tricky tie having beaten Real Madrid in the round before. Claudio Sulser gave the Swiss outfit an early lead which initially stunned Forest. Albeit, Clough’s men had The City Ground faithful rallying them on and managed to find themselves at 2-1 coming into the closing stages of the game. The young forward Birtles was again amongst the scorers. Grasshoppers applied the pressure and smashed the upright twice. Not to mention, the catlike Shilton flung himself across the goal line on various occasions.

Forest were the masters of keeping a tight defence and soaking up pressure. That pressure released when the Scot, Gemmill, broke free and scored in the 87th minute. Two minutes later, a header from Lloyd gave them a commanding 4-1 victory to take back to Switzerland. Typical resilience from Clough and Taylor’s men saw them comfortably draw the second leg 1-1, which set up a semi-final clash against the Germans, FC Köln.

Nottingham Forest were unfortunately missing their talisman Burns for the first leg of the tie. Furthermore, his defensive partner Viv Anderson was also forced to sit out. It showed early on as Köln took a 2-0 lead in Nottingham. The semi-final stage appeared to be getting to Forest who only had a League Cup final to compare the dizzy heights of European competition to. The 70’s equivalent of Jose Mourinho worked his magic at half-time, whipping his underdogs into shape.

With half-an-hour remaining on the clock, Forest found themselves 3-2 up with goals from Bowyer, Birtles and Robertson. The crowd were in disbelief how the game had turned on its head. Nevertheless, those cheers were soon silenced as a Japanese International embarrassed England’s number one. Yasuhiko Okudera’s shot slipped under the body of Shilton in the final moments of the match. His head sunk, face down in the mud. Forest knew they had a mountain to climb in Germany.

Both Burns and Anderson returned in the second leg which produced the usual rugged Forest performance. Köln’s forward, Dieter Muller, had impressed in the tournament, but was kept quiet by the two centre-backs. In the 65th minute, Clough and Taylor embraced each other on the bench as Ian Bowyer headed home the winner to stun fans of a Köln persuasion in the crowd. Forest couldn’t believe their luck; they were heading into the Champions League final having only been promoted to Division One the season prior. Clough’s Forest were in dreamland.

Going into the final against Malmo, the stadium in Munich was nowhere near full. Both teams were shock finalists and conjured up a far from pleasing European final. Both sides had similar styles of stopping flamboyant sides from playing football. It wasn’t one for the football purists. However, the famous story of the final is that of Trevor Francis.

Francis was signed by Clough back in February 1979 as the first British £1million player, off the back of Forest’s title-winning season. Yet, due to European rules, Francis was not eligible to play for Forest in Europe for three months after the transfer. The date was May 30th, 1979. The stage was set. Guess what happened next?

Francis started the match due to a falling out between Gemmill and Clough. The former Birmingham City man had to start in an unfamiliar role on the right-wing. Though, this would be the perfect position for Francis to make history. Jon Robertson, who Clough had threatened to axe for being overweight in the Second Division, weaved his way down the left-wing past two Malmo defenders, before hitting a back-post cross to Francis.

Francis looked as if he was going to take a tumble, but managed to stay on his feet, and headed the ball into the roof of the net. The Forest fans in raptures fell about the stands.

Francis’s goal was enough to beat Malmo, who never looked like scoring. The final whistle blew, and Nottingham Forest had achieved the unthinkable. The city with a population of less than 300,000 had overcome European elite to win the Champions League in their debut season.

Their maverick manager had achieved beyond expectation, but this triumph would not be the last in Clough’s glittering career. Forest went on to beat Barcelona 2-1 on aggregate in the European Super Cup, and retained the League Cup title. Staggeringly, Brain Clough’s soldiers managed to set a record of 42 games undefeated the same year, a record which stood for over two decades.

Unfortunately for Nottingham, their European success came at a cost, and they were unable to retain their First Division title. Forest finished second, conceding the title to arch-rivals Liverpool. Albeit, Forest qualified for the European cup as winners. This is where the story gets even more remarkable…

Going into the 1979-80 season, Clough’s men were on top of the world. The East-Midlands club had managed to win five trophies in two seasons. Unfortunately, the fan favourite, Archie Gemmill left the club due to his disappointment with Clough leaving him out of the ’79 European Final. Additionally, Tony Woodcock departed for a substantial £1.13million, to German outfit Köln. But ever the optimist, Clough signed attacking midfielder, Stan Bowles from QPR and left-back, Frank Gray from Leeds.

Forest began the season in good domestic form, on top of the Division One table after winning their first three matches. Similarly, they prevailed in the European Cup by beating Swedish side, Oster, 3-1 on aggregate. Liverpool, however, did not start in the same manner. A slow start in the league and subsequently dumped out of the European Cup by Dinamo Tbilisi. The demise of their nemesis seemed to spur The Tricky Trees on.

Forest got into the Semi-finals of the European Cup by beating both Romanian side, Arges Pitesti, and Germany’s BFC Dynamo. However, the success in Europe and the number of games over the two seasons appeared to slow down Forest in the league where they were thrashed by East Midlands rivals Derby County 4-1.

Forest were an excellent cup side, and Clough appeared to be the chief of mind-games in the big competitions. Their game against the Dutch master’s, Ajax, was one of his most pleasing results. The team who were the architects of ‘total football’ got schooled by Forest. Ajax were simply unable to display their suave and Nottingham ended up winning 2-1 on aggregate.

Poor results continued in the league for Forest, where they saw themselves slump to fifth. Forest stayed glued to that position, and would finish there come the end of the season. Aside from Forest’s exploits in the league, a promising League Cup campaign saw The Tricky Trees face Wolverhampton Wanderers in the final. Forest dominated the game. Francis, Robertson and Birtles all squandered some great opportunities. Wolves managed to match Forest and played them at their own tight defensive game. Wanderers managed to win the game 1-0. Clough was gutted not to add more silverware to the trophy cabinet, but Forest had their eyes on a much bigger prize further afield.

Hamburg were the obstacle Forest needed to overcome in the final of the European cup, to retain their title. Hamburg boasted an impressive record in both Germany and on the continent. Their poster boy, Kevin Keegan, had just won the Ballon D’or, and although Forest were the holders, most expected Hamburg to prevail.

In their usual manner, Nottingham Forest were far from pretty. They just edged the game at the Bernabeu, where Keegan didn’t display his usual threat. Instead, in the 20th minute, John Robertson drilled a neat strike from outside of the box. The destination? The bottom corner of the Hamburg net.

Animated on the side-lines, Clough and Taylor gave their team strict instruction to see the game out. Forest did precisely that. The final whistle blew, and the men in red dropped to their knees. Nottingham Forest won back-to-back European trophies against all the odds. Their triumph of winning more European trophies than league trophies is tattooed in the footballing history books, and still hasn’t been replicated.

The 1979-80 season was seen as a monumental success and goes down as a remarkable achievement. Forest punched well above their weight since Clough took over the club in 1975. However, the club struggled to keep such momentum, and Clough’s love of football was overshadowed by alcohol. All good things come to an end, and without Clough, Forest would never be the same.

Look out for Forgotten Forest Part 3: Life Beyond Clough. To find out how Forest faired when Clough left the club.