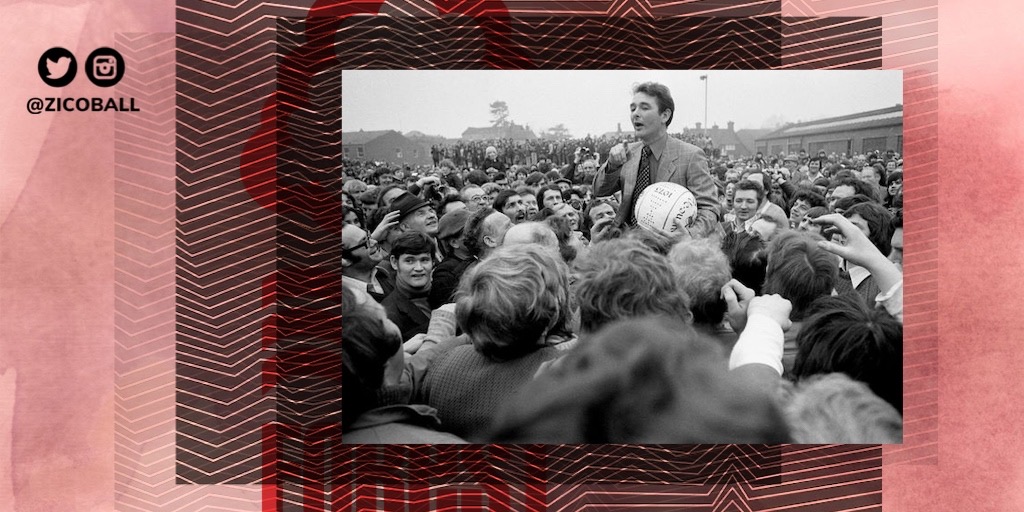 In the 1980-81 season, Nottingham Forest were dumped out of the European cup. CSKA Sofia defeated Clough’s men in the first round, losing 2-0 on aggregate. Adding insult to injury, Liverpool lifted Forest’s trophy that year.

Forest’s league form was just as abysmal as they finished in their lowest position since Clough took over the job, seventh. The new boys on the block, Aston Villa, won the Division One title.

The disappointing loss to Sofia knocked the wind out of Forest’s sails. The now not so Tricky Trees lost both the European Super Cup final to Valencia, and the 1980 Intercontinental Cup to Uruguayan outfit, Club Nacional de Football.

Clough and Taylor decided to break the successful side up and rebuild the squad. A decision which both men regretted. In 1982, Taylor retired as he felt he had given his all to Forest. Clough was the face of Forest, a wordsmith in front of the media. He was the man you either loved or despised. Yet, Taylor grounded the great gentle and was the brains behind Forest’s resolute, no-nonsense style of play. Clough could hold the dressing room together, but Taylor was a prized piece of furniture at the City Ground. Without him, Forest did not feel whole.

Clough tried to keep the side going, however, as he aged and his addiction to drink got the better of him, Brian could only muster two back-to-back League Cups at Nottingham Forest. The two pieces of silverware came between 1988-90, while subsequently reaching the 1991 FA cup final.

Ol’ Big Ead retired in 1993, when Forest were relegated from the new Premier League. Clough is hailed as one of the greatest English managers of all-time and many England fans were disappointed Clough did not get the opportunity to manage his national side. Many ex-professionals believe that Clough had the personality and stature to win a World Cup with England. Unfortunately, he died of stomach cancer in 2004. However, his legend lives on, especially through his son, Nigel, who currently manages Burton Albion.

Frank Clark, who played for Forest in their 1979 European Cup-winning season, took over the side in 1993 where they were promoted straight back to the Premier League. Clark then guided Forest to a third-place finish in the 1993-94 season.

Forest had a few stints in the UEFA Cup, reaching the quarterfinals in 1995-96. Nevertheless, Forest is now viewed as a yo-yo club, where they have been promoted and relegated from the top-flight on various occasions. The 2004-05 season Forest slumped to the third-tier of English football, becoming the first-ever European Cup winners to fall to such low league standings. The Tricky Trees are now a stable Championship club, with sights fixed on gaining promotion to the Premier League this season.

Can ‘that team’ rise again? With the current gulf in spending powers between teams in the Championship and top of the Premier League, it is highly unlikely that the Nottingham Forest story of the late ’70s will ever be replicated. That’s why the narrative rightly deserves to be celebrated in the footballing history books.

Finally, Forest has produced and nurtured an abundance of recognisable football stars. Roy Keane, Stuart Pearce, Stan Collymore, and Michael Dawson all played at the highest level. Yet, the stars of the ’70s and early ’80s are less renowned. It is evident how forgotten the Forest stars are, none more so than Martin O’Neill, who starred in Clough’s side.

Martin O’Neill is recognised in the millennial generation as a successful manager. He had fruitful stints with Celtic and Leicester. In his time at both clubs, he won two English League Cups with Leicester, and an abundance of Scottish league titles with Celtic. O’Neill has also managed Aston Villa, Republic of Ireland and most notably Nottingham Forest in January 2019.

Nevertheless, O’Neill’s reign was far less successful than his playing career at the Tricky Trees, as he only managed five months in charge. The tough-talking and no-nonsense mantra that O’Neill and right-hand man, Roy Keane, instilled at the club, was not appreciated by the playing staff.

O’Neill’s footballing prowess is not recognised in the footballing community, and his stint as a pundit portrays this. Whilst covering the 2014 world cup for ITV, O’Neill, who admittedly looks more like an IT whizz than a footballer, was mocked by presenter Adrian Chiles.

Players like O’Neill need to be remembered for upsetting the footballing landscape. His story proves that you should never judge a footballer by their physical appearance. After all, players such as Andres Iniesta optimise that greatness doesn’t always come from an athletic physique.

Forest’s accomplishments are astonishing, and the club who currently sit fourth in Championship certainly deserve a place in footballing folklore. Don’t forget Forest.