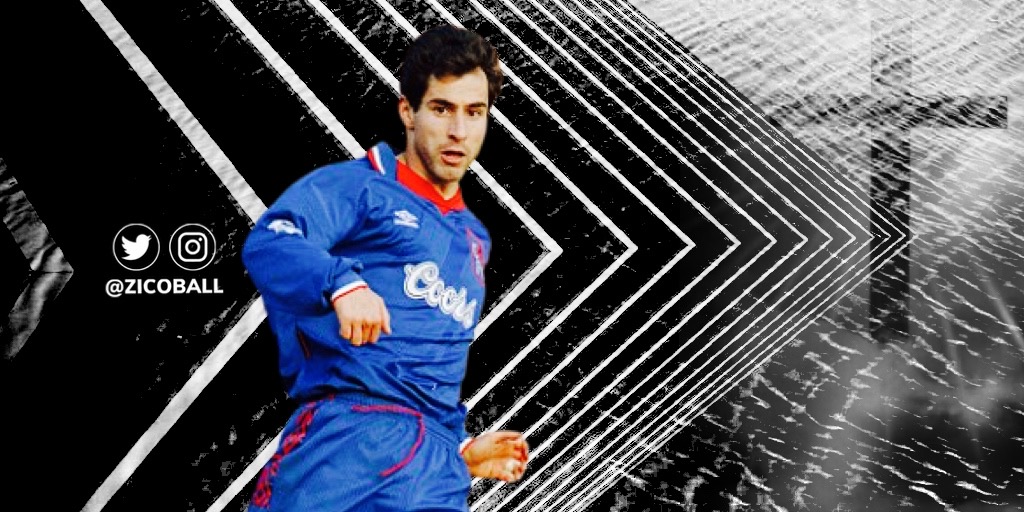 “Football was my god”

In England, Gavin Peacock is best known as a footballer, a former captain of Chelsea no less. You might even recognise him as a pundit. After all, he used to feature regularly on Match of the Day and Football Focus not so long ago.

But if you took a trip to Canada, you would discover the former footballer is best known as the associate pastor at the Calvary Grace Church of Calgary.

Peacock explains his new position as such: “If you had the translate it to football, it would be like an assistant manager.”

Sundays of the past would have potentially been a game day, but now Peacock spends them preaching at his church. And just like a football match, they require hours of planning and preparation.

“Some people say that’s just a half an hour message. But the average sermon would take 15 to 20 hours study and preparation in the week. So if you’re preaching on a Sunday, it’s virtually half a working week just to prepare for the sermon.”

But what led Peacock down this seldom trod path?

It began when Peacock was fresh to professional football. Getting paid to play for Queens Park Rangers, the teenager was right where he wanted to be. Or so he thought.

“You’ve got the money, the fame, adulation, the crowds. But it wasn’t quite as satisfying as I thought I would be,” the 52-year-old recalls.

On the pitch, things were going to plan, but he found himself wrestling with the more significant questions of life.

“What is life about? What is happiness?”

The young footballer couldn’t quite wrap his head around the idea that the football career he’d always wanted, and now had, wasn’t as fulfilling as he had expected.

A chance outing to a nearby church led Peacock to some answers.

“My mum just said she was going to pop along to the local church. She wasn’t a Christian, but she was going, so I said I would keep her company.”

After speaking with the Church minister, Peacock decided to attend a youth meeting for Christians who were closer to his age.

“I pulled up in my Ford XR3i. It was a proper 1980s sports car. I had the money in my pocket and the career. I had everything they say makes you happy.

“I walked into the living room with other people my age who didn’t have what I had. But when they spoke about Jesus Christ, and when they prayed, there was a joy and a reality which they had, and I didn’t.”

Peacock was 18-years-old when he found Christianity, and for the next 18 years, his religion would guide him through an impressive footballing career.

However, retirement wasn’t an easy process for Peacock. A long career had seen him return to QPR, the club where it had all started, albeit now playing in Division Two. But a loan move to Premier League club Charlton Athletic saw the Englishman given one last taste of top-flight football.

“I went there and did quite well. I was in the squad, I had a game or two, but then I tore my calf muscle, and it was a bad one.

“I was out for about six weeks. The plan was they were going to take me on at Charlton, take over my contract and maybe I’ll have another couple of years for my career, a swansong. But having got that bad injury [Alan] Curbishley couldn’t take me on at my age.”

He went back to QPR, where things were complicated. The club was in administration and Peacock was their highest earner.

“I weighed things up. In my final season, I had had some appearances in the Premier League; QPR was struggling for money; I had a bit of an issue with my knee.

“I could have gone somewhere else and played for another couple of years, but I wanted to finish while I was still at a good standard.

“And it didn’t seem right to stay at QPR while on those wages when they were in financial difficulties. [Ian] Holloway could have got in two or three younger players for what I was on.“

All things considered, Peacock decided to end his career at the club he had started at, back in 1984. It wasn’t easy, though.

“The gravity of the situation hits home. Because after I made the decision, the next day I’m not a footballer anymore.

Peacock can remember his dad, Keith – also a former professional footballer – giving him some advice after a disappointing loss.

“He said, you’re in your mid-20s, in the peak of your career, captain of Chelsea. These are great days even though you’ve lost. You’re a lot longer retired than you are playing.

“At the time I thought, oh I’ve got loads of time left. Of course, all of a sudden, I was 35 and finished. It was emotional. There was a sense of being wrenched away from the game you love.”

Religion was key in helping Peacock deal with this sudden gap in his day-to-day life.

“I was a Christian, so my sense of identity didn’t rest solely on being a footballer. As much as I love the game, there was something more than football. I knew that God would provide for me in whatever way that was.”

Despite this, however, the call to ministry wasn’t quite there yet. Like many former pros, the ex-Newcastle man moved into punditry.

“I enjoyed it a lot. I used to get £150 with Capital Radio to cover a game on a Saturday. I’d get up at six in the morning to drive to the game with my co-commentator Andy Burton.

“Andy and I would drive up to, say, Middlesbrough, and then I’d be back at ten at night all for 150 quid.

“But it was good because I was really learning a new trade. And I wasn’t Alan Shearer coming out of the game with so many England caps and winning the Premier League. I had to be good at what I did.”

Peacock’s hard work paid off. He got his TV breakthrough during the Africa Cup of Nations in 2004. It led to roles on Football Focus, Match of the Day, Match of the Day 2, and even covering the 2006 World Cup.

“Just after covering the World Cup in Germany, which you can say is a pinnacle – going with the BBC to cover the World Cup – I just started feeling the call to church ministry.

“Even though I loved what I did, there was something in the back of my mind that said this won’t be forever.

“I said to my wife; I think I’m going to give it all up. I could do my studies in England, but what about going into anonymity? Because my profile at this time was at its highest. I was even more well-known than when I was playing, because now I was on TV all the time.”

With his wife and two children, they left behind England and football and began anew in Canada. After finishing his masters in Divinity at Ambrose Seminar back in 2011, Peacock was offered a position at a church in Calgary. All these years on, you can still find him there.

While that link between religion and football isn’t an obvious one, Peacock’s first profession left him in good stead for what was to come.

“If you read the Bible, it’s got a lot of sporting analogies in it. If you look at good leadership, it’s defined in the Bible as being like a captain, but a servant leadership. The captain isn’t necessarily the best of them, and they’re not there just to serve themselves. They are there to make the team better.

“The best captains I played with were good individuals. But they had a way where when you couldn’t run anymore they lifted you and carried you.”

As a captain himself, Peacock has transferred his leadership skills into his new life: “You’re on the field of battle, looking for victory, going through the hard parts of the game. And you think of that in life, you’re bringing people along to the church, through struggles and difficulties.

“I also had to be a clear communicator on the BBC. I had to think about how I worded things and how people would receive it. And you have to use all of those skills when you are preaching.

“Both of those things combined in my two old careers, by God’s grace, serve me in this vocation I’m in at the moment.”