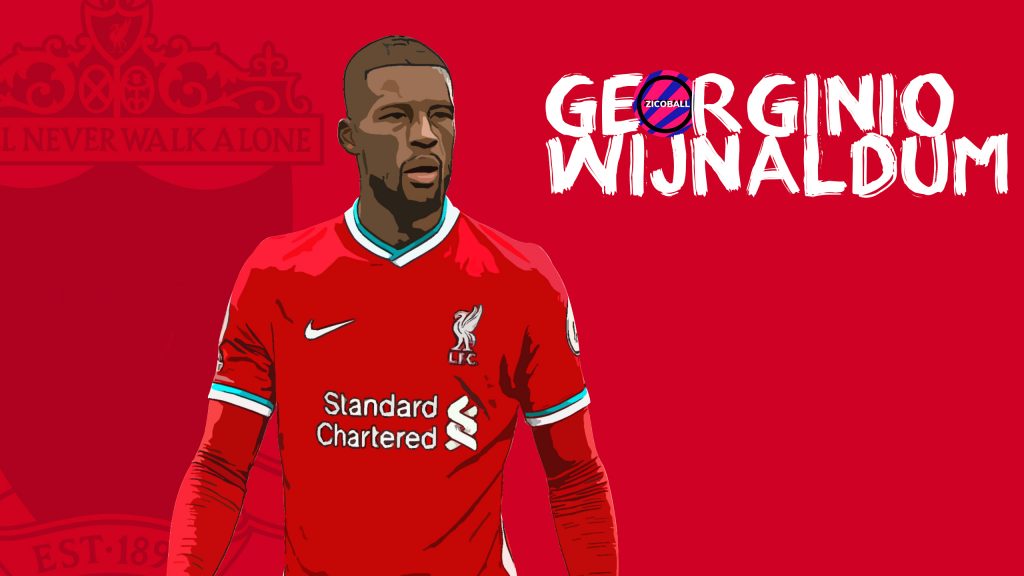 Georginio Wijnaldum, one of the single most underrated players in football. One of those players that get criticised for having very little output. One of a number of players who suffer as a result of being in a stat-obsessed era who view football through a computer screen.

The truth is, there’s a reason Gini Wijnaldum plays week in week out for Liverpool. And more often than not, he plays very well. So is the sole reason Wijnaldum is not rated on the level he should be due to statistical output?

Wijnaldum’s skillset is brilliant. He’s got excellent close control which allows him to be press resistant to the extreme. This, combined with his ability to misplace passes rarely, leads to him losing the ball at a ridiculously solemn rate at around seven times a game.

If we compare that to other players that I would describe as second-phase players, who don’t rely on output, for example; Paul Pogba, Jordan Henderson, Mateo Kovacic, and Naby Keita. Wijnaldum loses the ball at a rate of at least 30% less than all of them, excluding Keita. Keita loses the ball at a rate of 10% less than Wijnaldum, which is frankly ridiculous, but this isn’t about Keita, not yet.

Wijnaldum’s pass selection and press resistance are apparent, to the point that just by watching him, it’s easy to see how marvellous his ball retention is.

Were it not for these physical gifts; it is highly unlikely that Wijnaldum would be able to take advantage of the elite tactical acumen he was blessed with. As he was schooled through the Dutch football system, this was always likely to be a facet of his play.

His tactical savvy nature has enabled his ability to play a multitude of midfield roles, a versatility which Klopp craves. He can play as the deepest of a midfield three, a member of a double pivot, an advanced 8 in the midfield three, or even in the role of a 10 behind the striker.

The fact Wijnaldum can play in so many different roles, and positions offer Jurgen Klopp a vast degree of flexibility. He can play near enough any shape he wants, knowing that the Dutchman will not let him down. It also allows him to play multiple different profiles without having to worry about being utterly bereft of defensive solidity, which, against the media narrative, is Klopp’s priority.

Remember in 2017/18, when Liverpool had the ‘Fab 4’ with goals galore from Philippe Coutinho, Mohammed Salah, Sadio Mane, and Roberto Firmino? Liverpool leaked goals that year, but it was from set-pieces they failed so often. They trailed only Leicester City and Watford in terms of goals conceded from set-pieces as late as December.

Open play was an issue at times for The Reds, but the reason Liverpool could play such an offensive team in a 4-3-3 shape (allowing Coutinho free roam to get into his favoured left half-space), is because of the defensive solidity offered by Jordan Henderson, and more significantly Wijnaldum, on the righthand side. That was in his second season, and he had already played two differing roles.

In his first season at Liverpool, he had a role much more focused on scoring goals and providing output offensively. He was still doing his job defensively, but he had much more license to join the attack and support Coutinho, Firmino, and Mane, as shown by his 15 goal contributions. Wijnaldum managed 10 contributions in his following season, displaying his tactical versatility as his role changed.

From helping to create goals, to helping stop them. Of course, it wasn’t like Gini was Virgil Van Dijk with the worth he was doing, but it was a precious role he played for Liverpool, and alleviated concerns of conceding five goals each game.

In 2018/19, Liverpool adopted a slightly different style. With the colossal form of Van Dijk, the team as a whole had their roles and style changed a little.

Wijnaldum’s impetus to go forward offensively was almost completely stripped away. Klopp’s sole role for him was a difficult one which included a few key components; to hold space to keep the midfield unit compact, and never lose the ball. The Dutchmen excelled, and this did two important things; it allowed Liverpool to sustain attacks and apply pressure galore to the opposition’s goal, and second, it stopped teams from getting out quickly in transitions.

I deliberately did not go into Gini’s tactical nous in this regard, so as to go into it here. This role he had was contingent on him and his intelligence, the timing of when to release the ball and when to dribble with it, when he should look to evade pressure and when to play it to the centre-backs.

This is a role which whenever he has been absent from the squad, Liverpool have suffered. Notice, how often do teams get at Liverpool via their left side? Unless it’s right down the left flank in the wide areas, or it’s through a second ball falling at their feet, teams can’t play through there. This is because the area Wijnaldum is most in is the left side. It keeps the unit compact, and it is suffocating. Wijnaldum’s control of the space around in him is mightily impressive.

Whichever side Wijnaldum plays on, the middle is cramped because of his tactical intellect. And think, with the amount of work that is done in half-spaces now, closer to the middle of the field, that is invaluable to Liverpool. It forces teams out wide and encourages crosses of the ball if Liverpool is inviting pressure. Joe Gomez and Van Dijk will say thank you very much to that.

In transitions, it slows the attack down, because if a player tries to fly past Wijnaldum, they can’t. He won’t win the ball back too often, but what he will do is slow the attack right down. Right down to a point where now the shape is established, and Liverpool are ready for whatever you want to throw at them.

The best example I can think of this was the two PSG games in 2018. In the first, Wijnaldum played to the right of the midfield 3, in the right half-space. This was the left half-space of PSG, and more importantly, where their Brazilian talisman can be found. Neymar was not good at all in the first game. He had one moment through a giveaway ball from Mohammed Salah, which allowed the Brazilian to set up Kylian Mbappé, but that was it.

Neymar, through the rest of the game, got nothing.

In the second game, which is to this point, and Neymar’s crowning moment in Paris where Gini played on the other side, saw Neymar feast. This immediately tells you all you need to know. Gini is suffocating, constricting, and horrible to play against.

He has been doing this with regularity for the last two seasons; this same role, to the same level, weekly. It is remarkably consistent. He keeps the unit compact, restricts space, and never loses the ball.

Not every player with such ability offensively, as we saw in his first season at Liverpool and as we do on international duty, would take such a ‘dirty work’ role and perform it with such diligence and discipline every single week. It is a testament to his selfless nature.

The truth is, without Wijnaldum, I have serious doubts about Liverpool’s ability to win the Premier League this season, and there are question marks whether they’d have accrued 97 points last season, especially with Naby Keita’s injury issues.

Okay, that headline is awful by me, admittedly, but I can’t understate to you how much this partnership would excite.

The small sample size we have of Keita and Wijnaldum playing together is sublime. The handful of games at the end of the season was wonderful. Whether Brighton or Chelsea, the two of them were brilliant together.

There is a lovely balance of priorities when the two of them play together. Keita brings a bit of a different profile with his counter-pressing, disruptive nature, and willingness to actively go and pinch the ball back high up the field as we saw for two goals against Brighton. This gives Gini even more reason to do his usual role of shielding and keeping the midfield unit compact.

Because of the counter-press by Keita, it allows the other two central midfielders to come even higher up the pitch to block the space, allowing Liverpool to win the ball as high as possible. This happens at the same time as Keita’s newfound discipline, so there are no gaps, preventing the ability to play through the lines against the reds.

Due to Wijnaldum’s high-level tactical IQ, this helps him reduce the space even more than usual, as space is so condensed around a 40-yard radius, meaning the ball is retrieved higher up the pitch than was ever possible than with just Wijnaldum.

That is just defensively. Offensively, the balance is terrific. We see Liverpool in a more balanced, attacking way than ever before. Against Chelsea, with Keita’s discipline, holding position, and compactness, we saw more runs into the final phase by Wijnaldum with no insecurities of leaving the defence exposed. The runs into the box left Chelsea discombobulated, allowing dangerous attacks over and over from the Liverpool side.

A final note, defensively, they both help each other win the ball back. For example, the first goal against Chelsea; Wijnaldum saw that there was no significant threat on the Chelsea left, so he came further infield. Instead of just holding position when there was no threat, as so many would hold space and allow the team to play out. No, Wijnaldum, as great players do, went and pressed Willian on his front after Keita was pressuring him from behind. The end result was Liverpool winning the ball back and scoring a goal. It is normal to think this was all Keita, but the truth is, without Wijnaldum, the ball would have gone to Mason Mount, and Chelsea would have a chance to counter.

The two of them will become the best midfield duo in football if allowed to grow together, and it would be a scary sight.

Back to the goal, Gini, with his anticipation, his great read to stop the counter and win the ball back (even though he didn’t touch the ball), is just a microcosm of what he brings to this Liverpool team.

Week in, week out. Such a valuable player. A player, any coach, would want in their team. World-class. Invaluable.

I do hope, for my selfish reasons, to see Keita and Gini play regularly together and dominate a midfield.

The tactical solution everybody, Georginio Wijnaldum.