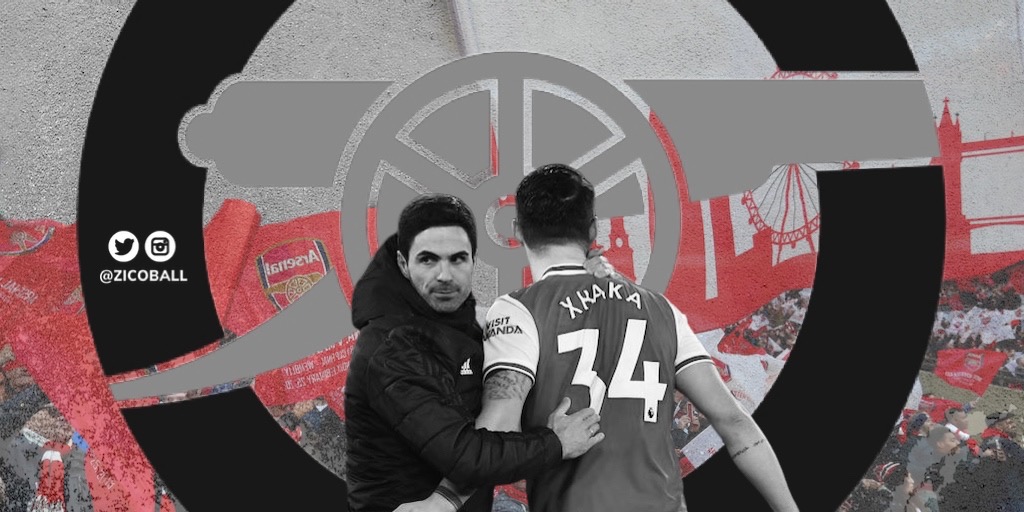 27th October 2019, and Arsenal are tied against Crystal Palace with only 20 minutes on the clock to find a winner. The Gunners had wastefully thrown away a two-goal lead to Roy Hodgson’s side.

Promising youngster, Bukayo Saka, is being readied to come on with Granit Xhaka the one to make way; much to the Emirates’ delight. Delight soon turns to anger as Xhaka takes his time in making his way to the sidelines.

Xhaka, not one to hold back, threw his arms in the air, cupped his ears, and began mouthing off to the home supporters. The combative midfielder then stormed down the tunnel and discarded his shirt. With that, many thought his Arsenal career was over.

Just over a week later, it was announced that Xhaka had been stripped of the captaincy, handing over responsibilities to Pierre-Emerick Aubameyang. To many watching events unfold, it would appear as if there would be no way back for Xhaka.

The sacking of Unai Emery at the end of the November paved the way for the appointment of fan favourite, Mikel Arteta. The decision to bring in their former midfielder was significant in so many ways, none more so than for the future of Xhaka.

When the January transfer window came around, it was a certainty Xhaka would leave. With Hertha Berlin angling for his signature, there was a last-minute change in circumstance, thanks to new the Arsenal boss convincing him to stay.

Arteta publicly proclaimed the importance of Xhaka and why he was so vital for his plans going forward. Since then, the ex-Basel midfielder has been a regular in the starting eleven and has undoubtedly won over the majority of fans.

So how has Xhaka managed to get to this point after all that has happened? Has it been a case of being unappreciated and misunderstood since his arrival in London?

When he arrived in 2016, many were excited to see a player that Arsenal fans had been screaming out for. A tough-tackling, no-nonsense presence in midfield. That, along with an impressive eye for a long shot, was what every Arsenal fan was expecting.

Xhaka isn’t the defensive midfielder that Arsenal fans had pictured, something which is becoming even more clear under Arteta. While Xhaka did provide what was required of him after signing, it didn’t deflect attention from costly mistakes that led to goals, and his over-aggressive nature. His hotheadedness, verging on clumsiness, is what saw him in the referee’s book regularly.

However, Xhaka remained focused and was in and around the starting line-up. It could be argued that not enough credit was given for his contribution to the team. Of course, discipline was a big let down early on, but he has learnt to control himself on the pitch as he has matured in an Arsenal shirt. Xhaka is better in tackles, averaging 1.7 tackles per 90 minutes currently; a decent statistic considering that getting stuck into tackles isn’t his prime focus under the new management.

What Arteta seems to like most about him is his passing ability. Xhaka’s passing capabilities is likely the reason why he is played in a three-man midfield, rather than as a defensive midfielder sat in front of the back-four.

The passing side of his game has always been a strong element and one which hasn’t drawn criticism. Long balls has always been an area of his game where he has excelled. His capabilities with a longer pass adds an extra string to a team’s bow which is so used to playing the ball on the ground, especially under Xhaka’s first Arsenal boss, Arsene Wenger.

Though the long-ball might not be something the team was familiar with, it was certainly not discouraged, as it provided the key to unlocking many an opposition defence. The success largely hinged on the array of attacking talent his passes were able to locate, with the likes of Aubameyang and Alexis Sanchez ahead of Xhaka.

In his 122 Premier League appearances, The Swiss international has managed 643 accurate long balls. An impressive statistic which shows how his way of playing has become key to Arsenal’s overall play.

Under Arteta, Xhaka is expected to play more as a deep-lying creative midfielder, almost giving him free roam in the midfield. This allows him to drop deep to pick up the ball in a quarterback-style role, and also wander further up the pitch to create chances for the team.

Xhaka’s role is similar to how Fernandinho plays under Pep Guardiola at Manchester City, where if needed, he will drop into the lefthand side of a back three to allow the ‘inverted’ fullbacks to go forward. This is already prevalent under Arteta’s stewardship, and has already benefitted the marauding Saka at left-back.

Early indications suggest Arteta wants to mirror play to what he learnt at City, with Xhaka playing a prominent part. With what Xhaka offers both defensively and offensively, he will be the focal point for the high press counter-attacking football that Arsenal want to create.

His passion and energy are an underrated feature of his game, two attributes this Arsenal team doesn’t exactly have in abundance. Matteo Guendouzi has seemingly embodied what it means to be a gritty Arsenal midfield player, perhaps signalling what it could be like alongside Xhaka. Two dogged midfielders, willing to die for the shirt, accompanied by a range of progressive passing.

It remains to be seen whether Xhaka will be offered the captaincy for a second time. Should Aubameyang depart the club and Xhaka continues his stay in North London, it is likely to be on the cards. Talking to Sport1, Xhaka clearly has a good working relationship with his boss,

“With Mikel, however, something like a ‘restart’ actually started for me. I had very good conversations with him right from the start, in which he showed me what he expected of me, how much he needed me in the team and who valued me as a player…

He is absolutely professional, pays great attention to discipline, team spirit, is open and direct in communication. I am convinced that we still have a lot of fun with him.”

This summer will be an opportunity for Arteta to rebuild, though most likely with limited resources, as Arsenal look set to miss out on European football for the first time in over 20 years.

Arteta will be desperate to keep hold of players like Xhaka who continues to prove his worth in this new Arsenal team. Arteta’s record when Xhaka completes 90 minutes is zero defeats in nine games, but when he hasn’t completed the 90, Arsenal have fallen to defeat in all three of them.

Love him or hate him, the numbers don’t lie, and the fact remains; Granit Xhaka is key to the Mikel Arteta rebuild project at Arsenal.