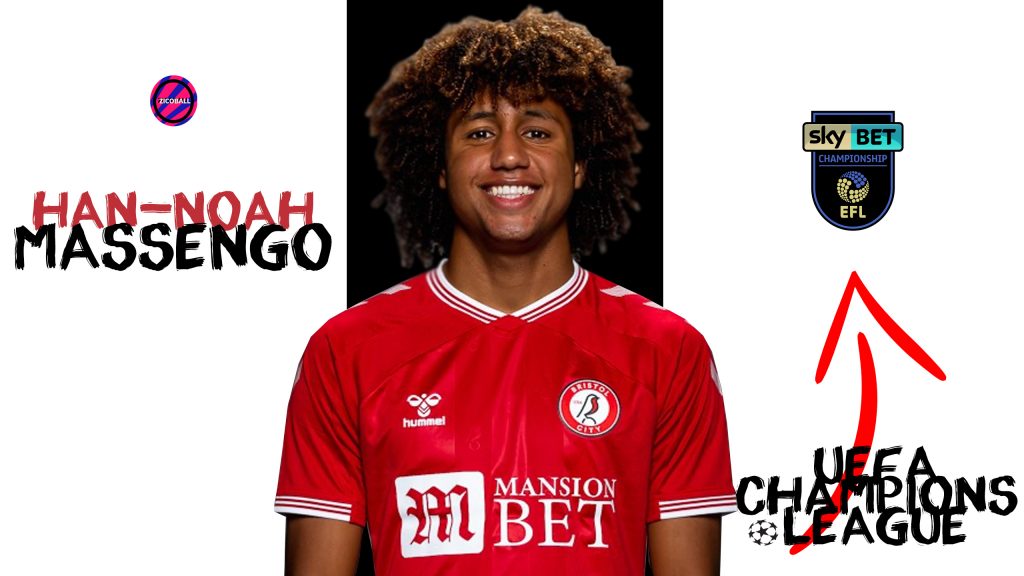 Han-Noah Massengo; the first person born in the 21st century to play in the Champions League now finds himself on the Bristol City bench.

Born on the 7th of July 2001, Han-Noah Massengo is easily one of the brightest young talents in an already strong pool of French players, so it seems a little strange for him to be plying his trade in Bristol.

Massengo was born in Villepinte in France and began his youth footballing career with his local side. Having bounced between academy sides, he subsequently found himself in Monaco’s youth team.

Joining the Ligue 1 side’s youth ranks in 2016, Massengo’s first season at the club happened to coincide with Monaco’s first Ligue 1 title in 17 years.

His breakthrough into the first team came in early 2018, having featured for Monaco B for his debut that season. Manager and Arsenal legend, Thierry Henry, gave Massengo his first opportunity.

Most players strive throughout their career to reach the Champions League’s dizzying heights, but for the then 17-year-old, UEFA’s flagship competition was where he made his debut.

Henry threw the technical midfielder into the deep end in a home match against Club Brugge for 22 minutes, with the Ligue 1 side already 3-0 behind. Although Monaco conceded a fourth with him on the pitch, Massengo didn’t put a foot wrong, completing 100% of his 14 passes whilst getting stuck in, winning his only tackle.

This introduction made him the first player born in the 21st century to appear in Europe’s premier competition, although the young midfielder wasn’t a main member of the squad at that point. His next appearance would be his Ligue 1 debut against none other than PSG. Massengo faced up against Neymar, Kylian Mbappe, and hat-trick hero that day, Edinson Cavani.

Again, he entered the fold during a heavy loss at 4-0 in the 69th minute. Massengo helped keep the game at 0-0 during his 20-minute cameo, showing his consistency by completing 100% of his passes once more. But with the club sat 19th in Ligue 1 by the end of January 2019, Henry was sacked by Monaco and that in itself signalled the end to Massengo’s time with the first team. Instead, he featured with the ‘B’ side for the rest of the season.

Questions marks and a new home

In quite a shock series of events throughout the summer of 2019, Massengo completed a permanent transfer to Bristol City, as Marlon Pack departed for Cardiff City.

The complete disbelief in the transfer led to many conspiracy theories – the most prominent being that the Robins had purchased the midfielder on behalf of Chelsea, who were under a transfer ban.

Head-coach at the time, Lee Johnson, was keen to suggest it would take him time to adapt at his age but seemed impressed by the youngster, “If he keeps on the current path and attitude, I haven’t seen much better.”

Massengo’s league debut came against QPR, being brought off the bench at half time. His front foot, attacking style was clear to see, getting two shots away, which was as many as any other City player.

An injury to Adam Nagy pushed Massengo into the starting line-up more often than expected, impressing in wins away at Derby County and Hull City with his attacking, direct displays coupled with plenty of flair.

He had the ability to move the ball at a great pace to advance the side up the pitch. Massengo averaged 28.6 accurate passes per game whilst seeing much less of the ball than Cardiff’s new man Marlon Pack had (who averaged 57 passes per game in his final season).

When Lee Johnson was relieved of his duties, his successor Dean Holden moved to utilise a more attack-minded midfield. This tactical shift led to fewer opportunities for Massengo, who only played 661 minutes of the 41 games under Holden.

Another Manager to Impress

His average passes per game this campaign has slipped to 15.5, and while he has been completing less defensive work, he has managed to half the number of times he is dribbled past per game. But now that Dean Holden has departed, Massengo has another new manager to impress, that man being Nigel Pearson, and to the naked eye, it doesn’t seem to have started well.

When two of the ex-Leicester City players’ midfielders were forced off with concussion against QPR, he turned to academy graduate Sam Pearson. With the academy graduate heading onto the pitch, the French wonder-kid watched on from the substitute bench once more.

With a large fee of reportedly around £7.2 million, City fans will be hoping to see more of the midfielder. At the tender age of just 19, however, there is plenty of time for him to flourish and reach the top of the footballing landscape.