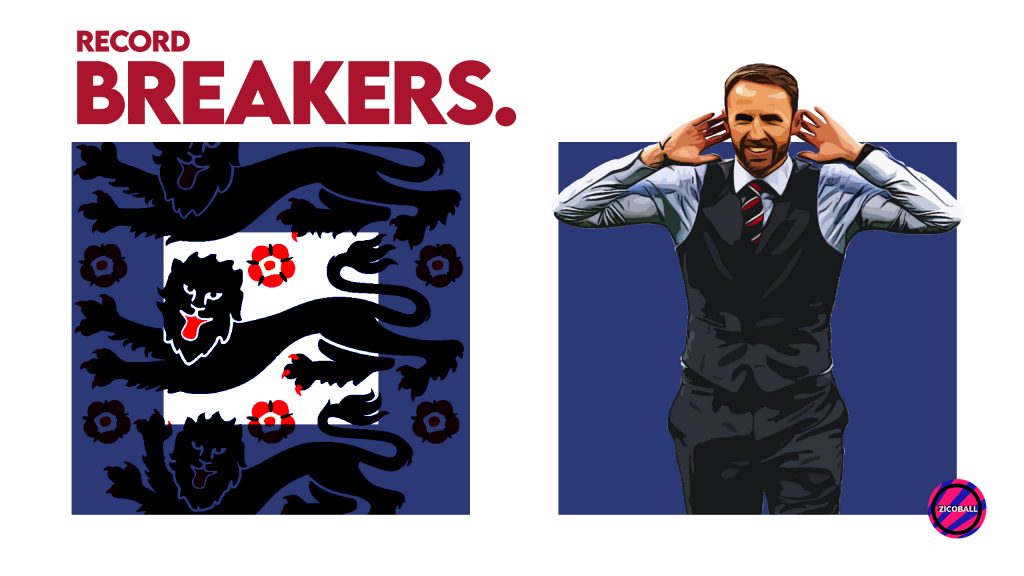 Who would have thought it, England are assuredly navigating a European Championship with a clean sheet record under their belt and a Wembley semi-final tie on the horizon.

The 4-0 controlled outing against Andriy Shevchenko’s Ukraine in Rome has not only pencilled in a subsequent fixture against Denmark, but it has also ticked off two unexpected records.

Despite the scoreline being a commanding one by England, it is not quite a Euros record in terms of goals scored. Instead, the Netherlands’ rout of Yugoslavia in 2000 takes that mantle.

A Patrick Kluivert hat-trick, a Marc Overmars double to cap off a fantastic individual performance centred around explosive wing-play, and an own goal made up the 6-1 scoreline for the Dutch. The Euro 2000 quarter-final stands as the only occasion where a nation has recorded six in a European Championship fixture.

Five games into the competition, England’s formidable back-line is yet to be breached. Harry Maguire’s return from injury in the group-stage match against the Czech Republic reaffirmed the stubborn professional displays in the initial Wembley outings against Croatia and Scotland.

Utilising a back-five in the round of 16 proved England’s flexibility and capacity to match up to opposing formations. The ability to switch systems mid-tournament should not be overlooked. Along with the players themselves, Southgate and his coaching team must be praised for the seamless tactical transition from one game to another.

The decision to line up with three central defenders and match Germany’s Joshua Kimmich and Robin Gosens on the wings with Kieran Trippier and Luke Shaw paid dividends come the full-time whistle. Not only did the England full-backs nullify the attacking threat on the wings, which Portugal struggled to come to terms with, but England were able to overload and capitalise on the space on Kimmich’s left-flank for both goals in the 2-0 win.

Although Thomas Müller was a whisker away from slotting an equaliser past Jordan Pickford in the second half, the ball was to sail past the post and ease anxieties throughout households in a football-adoring nation experiencing 30 (45) years of hurt.

England had dispatched the Germans. England were through, and England had momentum. Against Ukraine, Southgate switched to a four at the back, but the outcome was the same as the four games previous. Another clean sheet for the English.

It is alien for England fans to watch their side saunter through a major tournament, rarely feeling threatened. There is a familiarity with being on the edge of our seat following a plucky underdog registering a goal.

Now, Southgate’s men have cruised into a semi-final of a European Championship. The five straight clean sheets from the competition opener is a first in the tournament’s illustrious history. A mightily impressive defensive robustness which Pickford and company have championed into being at precisely the right time in England colours.

Manuel Neuer’s German defensive unit is the next best side for consecutive clean sheets from the start of a European championship. The Germans managed four clean sheets on the bounce in 2006. However, just like the round of 16 tie in 2021, that feat has been trumped by the English.

Given how warm-up fixtures against Austria and Romania in Middlesbrough ended in two shut-outs, England currently boast a clean sheet tally of seven consecutive matches. The seven-game run without conceding is another individual record for the Three Lions.

By leading the nation to two consecutive major tournament semi-finals, Southgate has become only the second England manager to accomplish such an achievement. Alf Ramsey in 1966 and 1968 was the last head-honcho to muster something as impressive.

Could Gareth tick off another record with a semi-final showing in Qatar 2022? Nevertheless, let’s attempt to deal with the task at hand first, shall we?

Words and Graphic by @SamIngram_