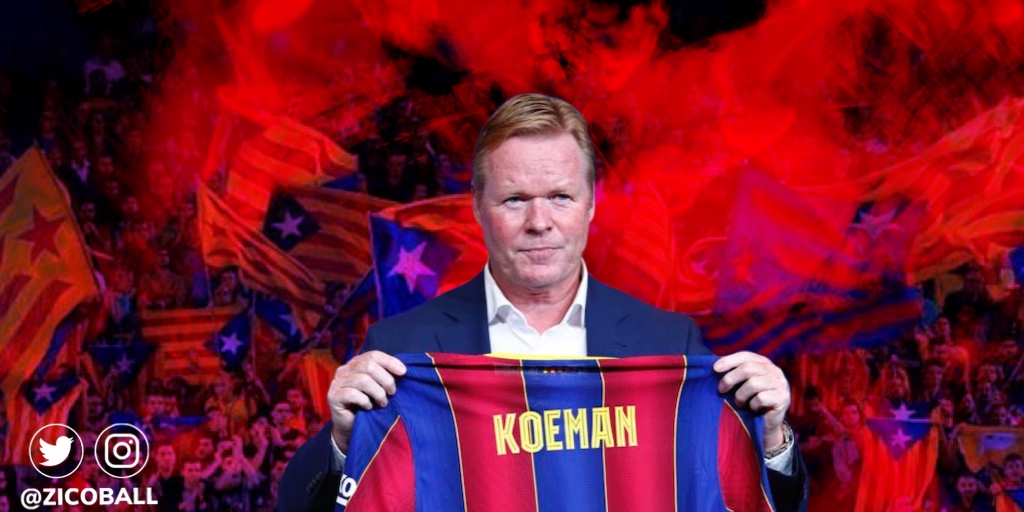 The second half of the season has been tough on Barcelona, especially since the restart of football following the period of lockdown. After suffering a number of injuries, the Catalonian side allowed their slim lead on the top of La Liga to be lost, eventually losing their title by five points to El Classico rivals, Real Madrid.

The Champions League campaign at first allowed them to forget about their domestic exploits when they managed an impressive 3-1 win over Napoli in the second leg of their Round of 16 tie.

However, they were soon brought down to earth with a thud when they faced Bayern Munich in the quarter-final, and were taught a footballing lesson by the competition’s favourites. Barca was stunned 8-2 which led to the eventual sacking of manager Quique Setien, and sporting director, Eric Abidal.

The scoreline was a record defeat for Barcelona in European competition, and it meant they were to have a trophy-less season for the first time since 2013/14.

As humiliating as the defeat was, the real concerns for the club were how things had been allowed to get to this stage for one of football’s most successful sides. With the majority of the squad, including the likes of Luis Suarez and Phillipe Coutinho put up for sale, it really does emphasise how poor Barcelona’s recruitment and use of signings was in recent years.

There is even talk of star man Lionel Messi potentially looking for a new challenge, potentially spelling an end to an era of great success, requiring a massive rebuilding project.

Although a viable solution will be challenging to find overnight to get Barcelona back to the loft hights where they aspire to be, it’s believed within the club that they have found the right man to lead the changes and make it happen. The man in question is someone very familiar to those at the Camp Nou.

Having spent six hugely successful years as a Barcelona player winning ten major honours, and two years as an assistant manager, Ronald Koeman is undoubtedly a man familiar to the Barcelona faithful. The Dutchman is who the board believe is going to be the right head coach to turn the fortunes of the flailing side around.

With a CV as impressive as Koeman’s, you can understand why the Spanish Giants have moved quickly to thrash out a deal with him to take charge soon after the Bayern defeat.

Having spent some time playing under the guidance of Johan Cruyff both at Ajax and Barcelona, Koeman has most definitely been taught some decent lessons about football.

Koeman has managed clubs in the Netherlands, Spain, Portugal and England, and so has vast experience at some of the top teams in Europe. Internationally his previous role as the manager of the Dutch National team adds another string to his bow, where he was able to achieve runners up at the UEFA Nations League.

In truth, his time as a manager has been a mixed one, winning honours along the way, but also enduring some tough moments with both Valencia and Everton.

Koeman certainly left his mark in England while in charge of Southampton, bringing the likes of Sadio Mane and Dusan Tadic to the South Coast for small fees. The pair would go on to be sold for considerable money after successful spells with the Saints.

He managed to guide Southampton to 7th and then 6th in the league, turning them into a side even the top teams dreaded to face, and he likely could have continued to progress the club further and further, but decided to leave when the lure of Everton came calling. Koeman’s spell wasn’t quite as successful in Liverpool than it was down south.

Despite his mixed fortunes as a manager, Koeman, unlike Setien, has history with Barça, and so the fans will already have affection there for the manager, and possibly give him the benefit of the doubt and more time to settle.

What will be appreciated by those traditionalists within the club is that Koeman is a big believer in promoting youth, which is, of course, one of the core foundations of the club since Johann Cruyff introduced La Masia.

As well as promoting youth from within, Koeman’s ambition will be to bring back a style of play those at the Camp Nou are accustomed to, involving playing out from the back with a focus on quick interchanges to create more and more opportunities in front of goal.

Although international and domestic football is quite literally different ball-games, this type of football has been quite successful for him with the Netherlands, producing some impressive results including a 4-2 win over Germany.

This type of football is high risk, but with the right players, it can produce some excellent rewards. The key is buying the right players, which of course, in the modern game doesn’t always boil down to the manager’s decision. If Koeman is allowed to sign the players he wants, while letting go of some of the so-called deadwood, he may be able to implement a successful system.

A player who will be crucial and considered one of the untouchables by the board of directors at Barcelona is Frenkie de Jong. De Jong played a key role in the middle of the park for the Dutch and was pivotal to Koeman’s philosophy. He hasn’t had the most amazing start to life in Spain, but under the guidance of Koeman, he could thrive, just like he did while at Ajax. Koeman’s arrival could become the catalyst for the central midfielder to kick on at Barça.

One man who has been away from management for a while, who some tipped for the role, is Mauricio Pochettino. Despite his Espanyol links and the fact he has never had success in terms of trophies, he is a man who knows how to build a team in his style. With the quality and resources at Barcelona, much more than what was as Tottenham, he could have adapted to the role seamlessly. With PSG falling short against Bayern Munich, it could be Paris where the former Spurs man takes his next challenge.

Koeman is the chosen one, however, and has been given two years to change the fortunes of one of football’s elite. It will be a difficult challenge, one with a lot of pressure. If Koeman receives the support needed, he will be able to implement the philosophies to usher the club in the right direction not only for when he leaves, but also for life after Lionel Messi.