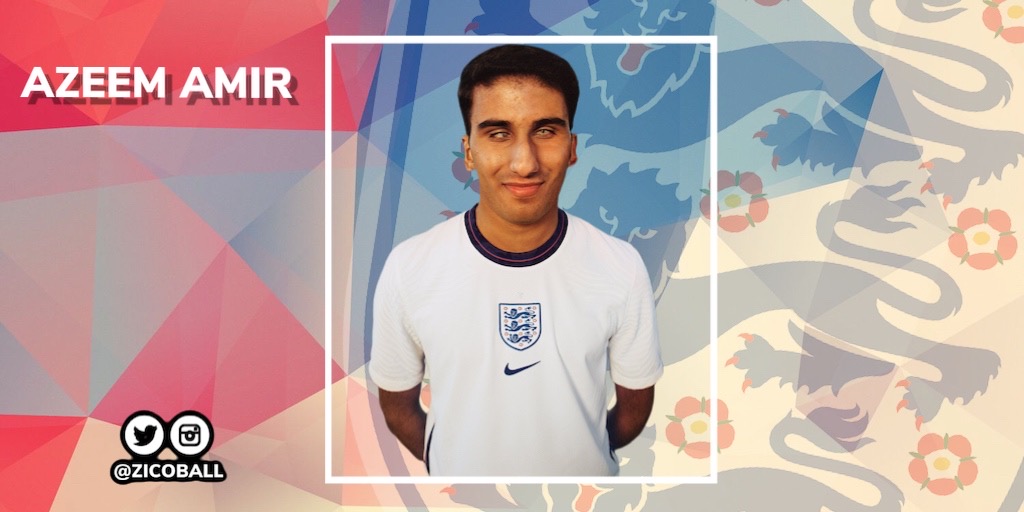 Azeem Amir is a man who has overcome and achieved a great amount in his young life. Born with no sight in his right eye and very little in his left – besides a slight light perception allowing him to see basic shapes and objects – Amir immediately faced adversity. However, fast forward 21 years and Amir now plays for his country, leading the next generation of English blind footballers.

“I’m extremely fortunate to be able to get opportunities that I wouldn’t have had if I hadn’t taken up football,” he says.

“It’s changed my life one hundred percent and given me the platform that’s opened so many doors outside of the sport.”

Introduction and rise through the sport

Amir was first introduced to blind football at the age of 15 when he used to attend events at his local council hall targeted at encouraging disabled individuals to try out new sports.

“There were loads of different impairment-specific sports, and that’s where I first came across what blind Football was,” he explains.

“Initially, it was just a hobby. I was pretty bad. But then, not only was it enjoyable, it was a hobby that I started to really take seriously.”

After turning 17, Amir became old enough to compete in the National League and soon joined his first club – Merseyside Blind FC. Remarkably, it was only a year later when Amir received the call from the England Blind Football team. The selection made Amir the youngest debutant in English Blind Football history, and as he explains, the call-up left him somewhat understandably, in shock.

“I was overwhelmed. It was a big step up, and I was very much out of my depth.” Reflecting on some of the biggest challenges he faced in bridging the gap between club football and international football; Amir highlighted physicality as a key distinction.

“I was only 17 or 18, still growing up, and I was stepping into a programme where the lads were training every day and doing extra strength and conditioning sessions.”

“They were very experienced, and there was me going in as a brand new player to play alongside and against some of the best players in England and Europe.”

He adds: “The other challenge I’d say is the workload. I went from training once or twice a week to training up to seven, eight times a week and that was something that took me a while to adjust to.” Despite these initial difficulties, Amir soon proved to both himself and the rest of his teammates that he was deserving of a place on the team.

“I look back now, and I think I’ve come on a lot since then – to be where I am now, hoping to establish myself as one of the main players, there is a lot of hope for the future.”

“I’ve got youth on my side and ability that I feel I can only further develop.”

Having overcome a number of challenges, Amir identifies self-belief as a key factor that has helped facilitate his rise through the sport. The 21-year-old is equally quick to highlight the important role his family have played in this rapid development.

“My family have supported me by getting me to training so I could continue moving forward and getting better,” says Amir. “They also helped with little things like my Dad getting me my first pair of shinnies. Now they watch me on TV.”

“It’s great to have that support there because they’ve seen where I started and where I am now, so they’ve been on the journey alongside me.”

In addition to the unwavering support from his family, Amir similarly credits the hard work and attentiveness of his coaches.

“My coaches have played a massive part from grassroots to elite level,” he admits. “They’ve been great in not only developing me on the pitch but also off it, in terms of checking up on my general life and supporting me with my projects outside of football.”

“They were the ones who saw the potential in me and continue to work every day to help me get to the level I believe I can reach.”

For Amir, this desire to continually improve has been further heightened by the presence of a strong and cohesive team spirit in the dressing room. As he explains, forging a close friendship with fellow teammates has been crucial in his continued enjoyment of the sport.

“They are a big part in making the football so enjoyable because at tournaments we’re away for two weeks but only actually playing for a few hours, so we spend a lot of time together.”

Alongside his footballing commitments, Amir has successfully balanced studying an Undergraduate degree in Business and Management. After three years on the course at the University of Salford, he graduated with First Class Honours this summer. When asked why he decided to go down the route of education with a career in sport already lined up, Amir offers a response further underlining his impressive, grounded attitude.

“Being at a semi-professional level really does mean that we have to have things going on outside of football to ensure we have a decent standard of living.”

“A lot of the lads have their own companies and work alongside playing and training. For me, getting educated was vitally important. Also, in the current climate of sport and the world with coronavirus, nothing is promised. We never know when we might not have a tournament.”

Despite holding a positive outlook on his time at university, Amir admits sacrifices had to be made in order to graduate.

“Being at university meant I had to make certain choices about when I could go out and whether I had to stay in and do work on a Friday night or not.”

“It was a challenge, but the university was very supportive, and I had some great people to help me get through it.

The Future of Blind Football

The initiative – put in place to surprise a young fan suffering from a rare eye disease – has been just one example of many schemes and projects designed by the Football Association to increase the exposure of Blind Football. As Amir explains, this continued exposure is crucial to the future of the sport.

“I was part of that [initiative], and it was great for me to not only meet them [Alexander-Arnold and Sancho] but explain to them what the sport is because a lot of professional athletes, as well as the general public, don’t know the sport exists.”

“Getting that exposure out there and getting them to showcase how much of a challenge it is is great. It allows people to realise that if they’re finding it difficult, then these guys who are training day in day out and able to perform at a world stage are definitely at an elite level.”

“It’s great to get that recognition, and hopefully things like that will continue because it does go a long way.”

Looking ahead to the future, Amir discusses both his personal goals and the aspirations of the England Blind team.

“Firstly, it’s to continue my development and try to be the best player I can possibly be. Also, to start influencing the international side when I step onto the pitch through contributing with goals.”

“I’m very lucky that I’m starting to progress and hopefully that will lead into the next major tournament which for us will hopefully be the World Grand Prix [World Games] in Japan in March 2021.”

“That will be a good experience to get us ready for the Euros in 2022 and then the World Cup in 2023 which is a qualifier for the Paralympic Games in Paris in 2024.”

With a busy schedule ahead for the next four years, Amir is ready – despite his relative inexperience at international level – to grasp the opportunity. He reflects this sentiment with one final statement.

“I’m still very new to the game, but I want to showcase my potential on the global stage.”