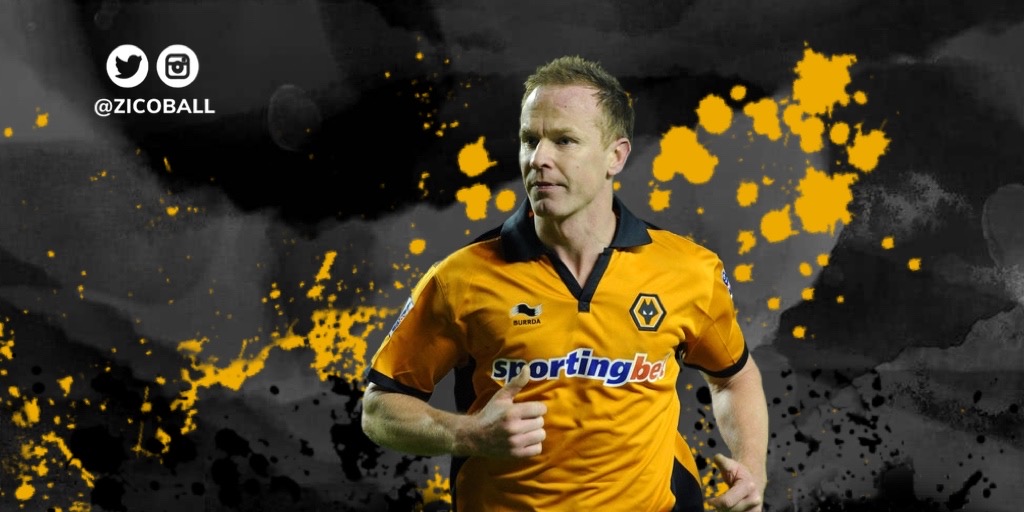 In retirement, most footballers never stray too far from the life they have become so accustomed to. When the boots are hung up, the majority of ex-professionals seem to end up coaching or working as pundits.

It’s a comfort thing, stick to what you know.

But when former Wolves captain Jody Craddock retired, he knew there was more to life than football. Sport wasn’t the only way to express or financially support himself.

Alongside an impressive career in football, of which he ran out for Sunderland, Cambridge United, Sheffield United, and Stoke City, his next love had always been art. Even while playing, Craddock had been making money off his teammates for personalised commissions.

“I think they thought; ‘this is going to be shite.’ But they must have been impressed because I sold them paintings of their wives and their children and their dogs, or of them scoring goals,” he explained.

The centre-back always had art as an adjacent passion, which was fortunate because retirement came a little sooner than expected.

It’s a classic tale, heard many times over in professional football. One manager is replaced, and the new man in charge doesn’t fancy some of the old brigade.

The 44-year-old explained how it ended for him at Wolves: “Mick McCarthy had been sacked, and Ståle Solbakken came in at the start of the new season. He said he would give me a two-week trial but it never really happened.”

Despite being 37 at the time, Craddock maintains he was as fit as he had ever been, but Solbakken clearly didn’t see him in his plans. To make things worse, the defender’s two-year-old son had just been diagnosed with leukaemia.

As the team prepared for a weeklong preseason tour in Ireland, Craddock sensed his new manager would not give him enough time to show his worth.

“I said: look, are you going to give me an opportunity to prove myself? Because if not, I’m not going to Ireland. My lad’s got leukaemia, and there’s no way I’m leaving him.”

With his son unwell, Craddock didn’t relish the idea of uprooting his life in search of a new club. He figured it was time to call it a day.

“At that point it was tough, that initial shock, you know? It was like, bloody hell.”

Even now, seven years on, such is Craddock’s affection for Wolves, the club he spent a decade with from 2003 to 2013, he still feels frustrated by how things unfolded towards the end.

“I’ve become bitter about it because he [Solbakken] got sacked six months later and Wolves got relegated. I know I was fit, and I know I could have gone in and done a job.”

With a mindset like that still apparent, it’s easy to see why he was made captain of the club back in 2006.

However, when news of Craddock’s impending departure came through, Wolves’ chief executive, Jez Moxey, wanted to organise a testimonial. Unfortunately, even this parting gesture of goodwill didn’t happen without complications.

“I’d been at the club nine years when Solbakken let me go. The club contacted me. Jez Moxey said, what’s going on? And I’m like, your manager is letting me go.

“I think the club wanted me to stay. It shouldn’t have come down to the manager, but that was that.”

Eventually, the club managed to organise Craddock a short-term deal to keep him around just long enough to make the ten years and have his testimonial before retiring.

“They gave me a very minimal contract. We’re talking £90 a week or per even month. I can’t even remember what it was.”

But having that final farewell did at least afford Craddock the kind of closure on his career that many professionals don’t get.

“That was great, and there’s a lot of memories. To have a testimonial, to be able to say thank you to all the fans, that was brilliant.”

And so, what next? It’s a troubling question for most footballers, but one Craddock had the foresight to consider while still a player.

“I took my coaching badges when I was younger, so I got my B licence. I did at some point want to be a coach, but when it came to it, I thought: no, I’ve worked hard enough to get myself in a position where I can do the art.

“I was thinking, just what is the point? I haven’t worked this hard for so many years to then also miss the kids growing up.”

Fortunately, Craddock always found the time to maintain his other passion while playing. So when it was time to move away from football, his next direction was obvious.

“I kind of knew what I was going to do when I retired. So it wasn’t like, oh shit what am I going to do now? I had the art,” Craddock explains.

“It got to the point where I could sell it, so that’s what I’m doing.”

Art had a played a big part in keeping the Englishman relaxed while experiencing the pressures of being at a football club so often fighting relegation or pushing for promotion.

“I’d go up into the studio and just chill out and paint. All I’d think about was what was in front of me. That was a good stress reliever from football, from anything.”

Craddock’s style is unique. Lately, he’s been taking inspiration from traditional Italian statues. He reimagines them in a photorealistic manner with a subtle graffiti-style added to the paintings to imprint his own touch. His recent work can be found for sale online.

It’s hardly a common route to take, from football to painting, and Craddock ensures there are few similarities between the two careers.

“The only similarity is that I need to work really, really hard at it to keep improving. But you can apply that to anything.

“Apart from that, football’s completely different. You go in every day, have banter with the lads, and then it’s proper pushing your body to its peak.

“With art, I’m sat every day chilling out with the telly on in the background. It couldn’t be more different.”

And despite his footballing past, painting is now very much Craddock’s present and future.

“I need to be taken seriously. I’ll be remembered as a footballer. But at the moment, I’m an artist.”