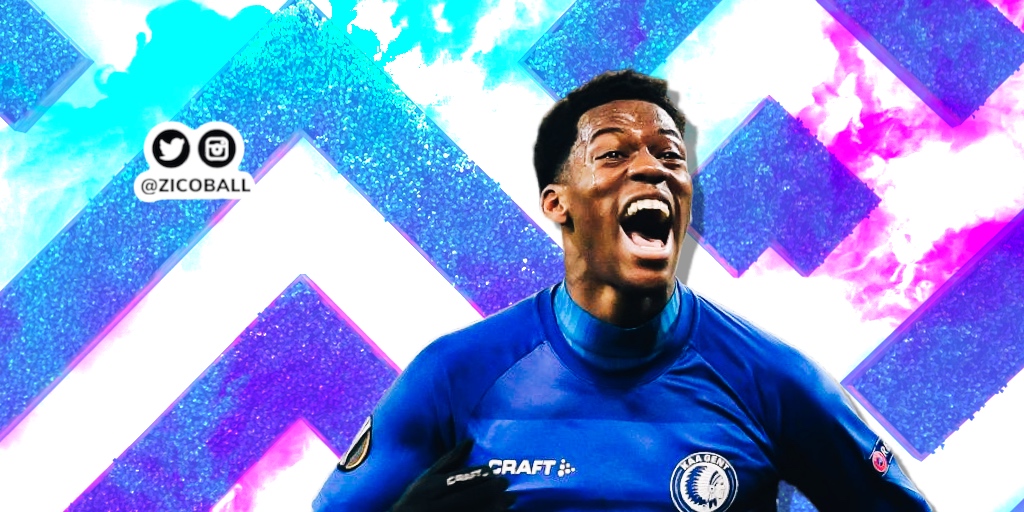 A country well versed in producing world-class sportsmen whose exploits play out on sheets of ice, over the last twelve months Canada has also proved worth its salt when it comes to developing young footballing talent. In March of this year, Alphonso Davies stamped his authority on the European game with a dominant performance for Bayern Munich, silencing the Chelsea faithful at Stamford Bridge.

While one swallow does not necessarily make a summer, one talismanic performance from a burgeoning superstar doesn’t suggest a country with very little historic footballing culture is set to become a legitimate talent factory. However, another Canadian talent has also piqued the interest of elite scouts – Jonathan David, KAA Gent’s attacking fulcrum and top scorer.

In recent years, a swathe of sensible investment in sporting infrastructure coupled with a change in attitude towards the sport in Canada has seen a budding generation of footballers thrive, move into some of Europe’s premier competitions and germinate green shoots of positivity for the Canadian national team. Jonathan David, an introverted and diminutive 20 year old from Ottawa, has blossomed in his first full season in Belgium, finishing a domestic campaign curtailed prematurely by the COVID-19 crisis as top scorer with 16 goals and a string of blistering performances to his name.

Born to Haitian parents, Jonathan David is leading a crop of fledgeling, first-generation Canadian immigrants with the world’s game in their blood. Until recently, ice hockey, baseball, and basketball, were the national pastimes of Canadian citizenry. Canada witnesses healthy immigration from countries such as Japan, Nigeria, and Russia, seeing increasing numbers year on year, all nations of which football is part and parcel of daily life. The public sentiment towards the game, wrongly derided for years in Canada as for children and women, is changing rapidly. It’s no coincidence that Canada’s two hottest rising stars are children of immigrants.

Two years ago, David was playing amateur football back home in Canada’s capital. Still, an eye-catching performance in the prestigious 2018 Toulon Tournament for his nation’s under-17s offered David the opportunity of a lifetime and a trial at Belgian top-flight side KAA Gent. His natural ability and astute footballing brain meant the trial period was an unmitigated success. Despite complexities surrounding his age and the lack of EU citizenship, Gent would not be deterred in their pursuit of David as he joined up with the team in a professional capacity after his 18th birthday.

Peter Balette, Technical Director at KAA Gent, spoke to me recently about how it came to pass that Jonathan David would sign his first professional contract more than 5600 kilometres from his family home.

“Our head scout, Gunter Scheepens, described him as an interesting player and he was right.

Gunter spotted him at a youth tournament playing for an under-17 Canada side. He came to our club for a trial period, and we were extremely impressed. Unfortunately, he was not yet 18 years old, so that meant we were made to wait. The complications in him not being an EU citizen were also a problem. He went back to Canada briefly – back to school – but we brought him back a second time, and he trained here. We had to keep it very quiet as we were very interested, but he couldn’t sign professional terms until he was 18. Finally, we brought him back to Gent after his 18th birthday and immediately drew up a contract. This is just the way it works; sometimes, it wasn’t an easy process.”

David has excelled in several positions across the Gent frontline during his time in Belgium. He has a penchant for playing between the lines in the attacking third, thriving as a second striker behind the likes of Roman Yeramchuk and former Huddersfield Town target man Laurent Depoitre, or even leading the line in a sole striking role. The energetic Canadian has wreaked havoc among Belgian defences; an elusive presence in the middle channels, David’s ability to carry the ball forward and beat his man with a mazy, technical dribble has been one of the outstanding facets of his game. Eleven goals in his first 12 appearances for his national team has proved invaluable to a side still struggling for world-class talent – although signs of progress are beginning to show.

Reminiscing on his first few days at the club, Balette mused “I remember the day he arrived for his first training session. He’d only just signed on professional terms, and already he was convincing our coaches of his talent. He played briefly for the second team, but in the preparation for the 2018-19 season, he caught my eye. He was put into positions he was not necessarily used to, but his talent always allowed him to adapt.

In the first team, he began as a striker, but last year he shifted back into the number 10 or shadow striking role. We saw immediately that he had a lot of potential, he’d shown that in his first season, making the step up to first-team football look easy and chipping in with plenty of goals and assists.”

During his debut campaign, Jonathan David broke into the Gent first team midway through the 2018/19 season and finished with a remarkable tally of 14 goals and five assists. The following season, one ended prematurely by a global pandemic, David tallied 18 goals and eight assists. Without a full Belgian Pro League campaign under his belt, David already has a proven track record of putting up incredible numbers and has yet to turn 21. His domestic exploits, coupled with four goals in the Europa League earned David a 2020 Golden Boy nomination from Italian newspaper Tuttosport, an accolade he shared with his teenage compatriot Alphonso Davies.

“At just 18 or 19 he has already succeeded in being the league’s top scorer and is one of our most intelligent players by far. Where can he go? I’d like to think he will stay one more year with us and will be happy, although that is probably wishful thinking. When you talk to other players in our squad, and you ask them who is the biggest talent or who has made the most progress, or who can make even more progress, there is only one name, and that is Jonathan David.

Even in European games, he was a presence. He turned up, played in big games, made them count, and when you turn up in European games you are in the spotlight, and you have a big chance to go away somewhere bigger.”

Speculation is rife as to David’s next destination. According to Belgian outlet Het Laaste Nieuws, David seems set on a move to the Bundesliga, while there have been leaks of significant talks with both Ajax and Lille. David’s representatives have also met with Arsenal, Manchester United, Bayern Munich, Borussia Dortmund, Borussia Mönchengladbach, Bayer Leverkusen, Olympique Lyon, FC Porto, Inter Milan, and AC Milan – quite literally a who’s who of European aristocracy.

Perhaps his most defining characteristic to date is his impressive mental fortitude. In December of last year, Jonathan David had the misfortune of learning the health of his mother, Rose, was rapidly in decline. Deciding to catch an immediate flight home to Ottawa, his mother sadly passed away during David’s layover in London. Having spent two tumultuous weeks back home in Canada comforting his father and sister, David returned to action for Gent a mere 18 days after his mother’s passing, providing a crucial assist in a 1-1 with title rivals Club Brugge.

David could have been forgiven for taking further time out after such a devastating loss, but when offered the chance to channel his emotions into an important game of football, he took it. Reflecting on David’s swift return to normalcy and his ability to compartmentalise, Balette said “Even when things don’t quite go his way, say he doesn’t score for three, four, five games, he reacts the same way all the time. After the death of his mother, the way he reacted was extremely calm and collected. I know personally that it hurt him very much, but he is a guy who is able to put certain things to the back of his mind while he plays and can perform to the best of his abilities even when working through terrible things – it’s very admirable.

He is a complete professional. He can divide things in his head, and he doesn’t lose control of his mind or his body. Everything in his head is focussed on training and getting better. He stays later than most at the end of training to try and get better, always one of the last to leave the field. What he has done this year is not lucky; it is definitely not luck.”

As part of Canada’s core of hungry, rising stars, and having picked up Canada’s men’s player of the year after leading the national team to the quarterfinals of the Gold Cup and an upset over the United States in the CONCACAF Nations League, Jonathan David has an extremely bright future ahead. The recent tactical shift, or regression – whichever way you want to see it – towards traditional striking partnerships, see the likes of Juventus, Atalanta, Inter and PSG, suits David’s game down to the ground. His link-up play in both the shadow striker or centre forward role is to be envied.

As a squad overhaul at The Emirates looks unavoidable, Mikel Arteta will be scouring the continent to revitalise his striking options at Arsenal and fix an inconsistent, but at times potent, front line. Pierre-Emerick Aubameyang is often employed wide but enjoys cutting inside, Nicolas Pépé is consistently positioned on the right but being extremely left-footed also cuts inside, while Alexandre Lacazette plays through the centre but fails to drop deep. It’s an imbalanced attacking trio that would no doubt be shored up by the presence of an effective shadow striker with the inherent ability to dribble past a man – a hole the versatile Canadian can undoubtedly fill.

If what we read in the papers is to be believed, then a journey south to Lille to replace the outgoing Victor Osimhen looks to be David’s preferred destination. For utterly selfish reasons, a move to the Premier League to work under Mikel Arteta, Carlo Ancelotti, or even Marcelo Bielsa, and to feature prominently on Match of the Day week in week out, would be a welcome one.