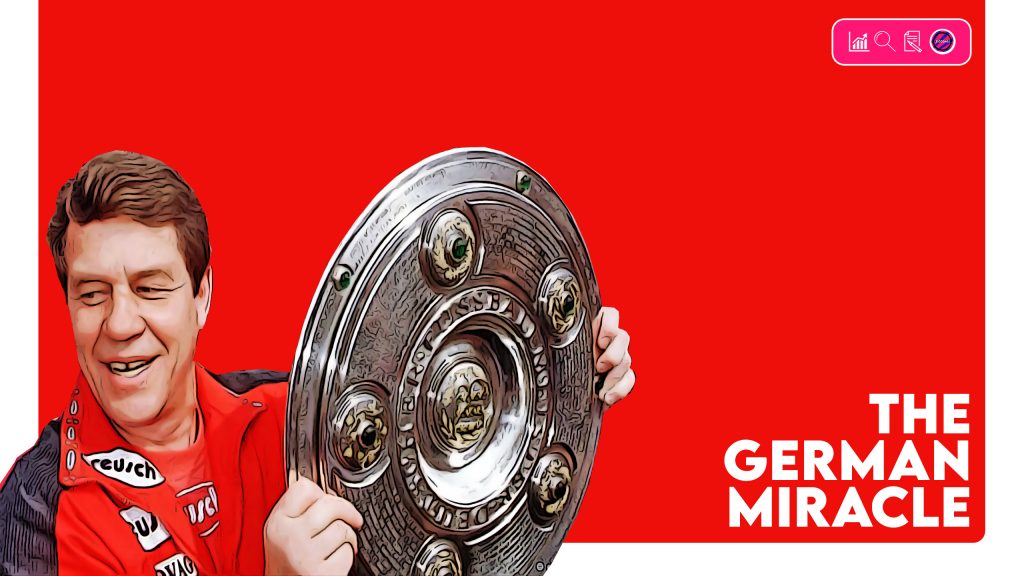 2nd May 2016 – the day Leicester City won the Premier League title; after Chelsea and Tottenham Hotspur played out a 2-2 draw. A date that for most football fans, not just those of a Leicester persuasion, will be fresh in the memory. An unlikely 5000/1 success, never done before. Well, fans of 1.FC Kaiserslautern might have a thing or two to say about that.

German football in the ’90s, as it is today, was dominated by Bayern Munich and Borussia Dortmund. However in the 1997/98 season, the Red Devils would tear up the script. Bundesliga champions as recently as 1990/91, Kaiserslautern proved a comfortable top-flight side with top-eight finishes in the years following their impressive triumph. However, in 1995/96 they suffered relegation to the 2.Bundesliga, while winning the DFB Pokal.

So how on earth did they manage to come back and win the league two years later? Let’s look into how the team became title winners unexpectedly and what happened in the years following the success.

The 95/96 season was a season of mixed emotions, with Kaiserslautern winning the DFB Pokal, while also suffering their first-ever top-flight relegation. The relegation brought a change in manager, and in came Otto Rehhagel, to replace Eckhard Krautzun, who was sacked by Bayern Munich in the spring.

The new man brought about instant success with the club winning the 96/97 2.Bundesliga by 10 points and ensured a swift return to the top-flight. Not only that, but the club managed to keep much of the relegated squad in-tact, meaning they were playing in the second tier with a first division side. This included the likes of Michael Schjonberg, Miroslav Kadlec and Andreas Brehme, scorer of the winning goal for Germany in the 1990 World Cup Final.

The Danish international, Schjonberg, later said: “It might sound stupid, but all the games we won in the second tier helped instill a winning spirit.”

During their second-tier title-winning campaign, the Red Devils drew an average attendance of nearly 37,000 to the Fritz Walter Stadium, which was amazingly higher than their previous campaign in the top-flight.

Returning to the Bundesliga With a Bang

The 1997/98 season goal was merely to stay in the Bundesliga. Andree Wagner, a Kaiserslautern fan who studied Otto Rehhagel’s success, said: “The fans loved the team because it was a fantastic mix of players. Fans, team and coach became an absolute union.”

And that was something that defined the success of this Kaiserslautern side, Bayern Munich and Borussia Dortmund might have had the big names, but Kaiserslautern were a tight-knit team who had become used to winning.

The fixture list obviously threw up Bayern vs Lautern as the opening day of the season. A game that was won by a late Schjonberg goal, one which Rehhagel would savour as he had not left Bayern on the best of terms. The match was dismissed as a freak result, but it wasn’t. The Red Devils took the top spot after the fourth match and didn’t relinquish it.

Otto Rehhagel is more commonly associated with his success at Euro 2004 with Greece, who were 150/1 to win the tournament. He managed to win the tournament getting the best out of the players at his disposal, playing a defensive, aerially dominant style that relied on set pieces.

However, with Kaiserslautern, this was different. While they did rely on set pieces and the goals of target man Olaf Marschall, they also allowed for the creative talents of Swiss playmaker Ciriaco Sforza, who had previously played for Die Roten Teufel before short spells at Bayern and Inter Milan.

As well as the Swiss international, Rehhagel was reliant on Ratinho, a Brazilian winger, for creativity while pairing the two with solid midfield workers, which occasionally included new signing Michael Ballack.

Telling UEFA’s website in 2015, 21-goal Olaf Marschall said: “Otto gave us freedom on the pitch. He told us the line-up; we did the rest. Everyone helped out in defence, even the strikers, chasing the ball as soon as we’d lost it. A bit like Dortmund when they won their recent Bundesliga titles (2011, 2012). Otto had this incredible sense for how to build a team.”

The success of the side will often be associated with the goals of Marschall and the creativity of Sforza. Still, the use of Czech Republic international Miroslav Kadlec as a sweeper was fairly understated. He gave the side a tactical advantage as he was comfortable enough in possession to move into the midfield from the back and add numbers when needed.

Following their opening day win away at Bayern, ‘Lautern earned 33 points out of the next 42 up to Christmas. Following December, however, they drew more games than they won, but the title was wrapped up with a game to go after putting four past Wolfsburg, with Bayern drawing 0-0 at Duisburg.

The success meant that Kaiserslautern became the only Bundesliga team to win the title after being promoted the previous season, something that hasn’t been achieved since.

Ciriaco Sforza said that the credit should be Rehhagel’s. “He knows how to use the players at his disposal. With us, he knew we had to attack and play power football. With Greece, he realised that as long as they were solid at the back, somehow they would score.”

Nearly the whole population, 100,000, filled the streets of Kaiserslautern to celebrate the championship.

The Kaiserslautern Years That Followed Success

A fifth-placed finish the following season as well as reaching the Champions League quarter-finals was the best it got for Kaiserslautern, who lost a number of players in the years that followed. Kadlec left the club in the summer, as well as Pavel Kuka and Andreas Brehme who hung up their boots. These departures were not replaced, and disharmony began to appear behind the scenes.

The club also allowed Ballack to leave in the summer of 1999 to Bayer Leverkusen, as players started to criticise the manager and his tactics.

They again finished 5th in 1999/00, but by October 2000, Rehhagel had resigned. Although the club reached the UEFA Cup semi-finals the following year where Alaves prevented them from facing Liverpool in the final, the slump had already begun.

Top half finishes followed the UEFA Cup semi-final, but in 2002/03 the club finished 14th and ultimately three years later they were relegated to the second tier for the second time, a decade after their first.

In the early part of the decade, the club consistently suffered from near-fatal financial problems, something that the club still suffers from today. The club did return to the top-flight after winning the 2.Bundesliga in 2009/10 but only lasted two years before finishing rock bottom in 2011/12.

The financial issues behind the scenes have played a significant part in the clubs decline and bouncing between the divisions. After a few failed attempts to get back into the Bundesliga, the club started to slide down the table, culminating in them finishing bottom of the 2.Bundesliga and getting relegated to the third tier for the first time in the club’s history, where they remain to this day.

Although the club were in the third tier, the 1500 fans that witnessed the relegation away at Bielefeld made it clear they were sticking around, portraying banners stating: “Wherever you go, we are coming with you. Love doesn’t recognise football divisions.”

The club did have something to smile about, however, at the end of the 2018/19 season. An end-of-season friendly with Bundesliga champions Bayern Munich, a sell-out at the Fritz Walter Stadium. However, the action on the pitch was of little significance.

During the match, the club’s head of finances, Michael Klatt, received a message from the DFB Headquarters that the four-time German champions would get a license to play in the third tier for the 2019/20 season. The German licensing system is strict and demands financial security, something that Kaiserslautern have struggled to achieve in the years following their 1998 league triumph.

Kaiserslautern could breathe a sigh of relief, and achieved a mid-table finish in the 3.Liga following the conclusion of the 2019/20 season. Whatever happens with 1. FC Kaiserslautern, the club and the fans will always have 1998.

It should be remembered as one of the most amazing achievements, and a modern footballing miracle, rivalling that of Leicester City’s title win in 2016.