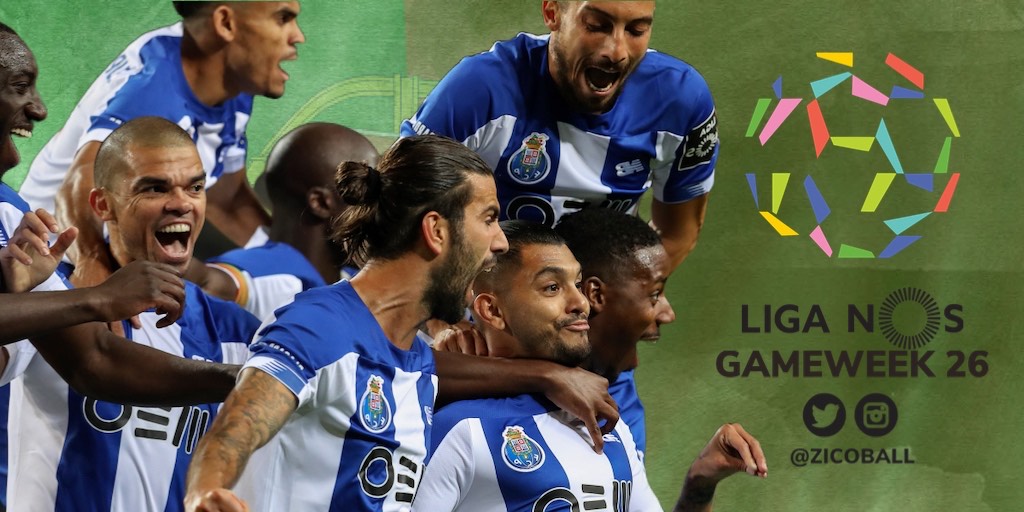 Portimonense produced a stunning second-half comeback to snatch a point and dent Benfica’s title hopes during week 26 of fixtures in the Liga Nos.

Benfica, who had gone into the game as league leaders, were cruising at half time thanks to a clinical first-half showing. Pizzi opened the scoring with his 15th league goal of the season.

The Benfica man unleashed a smashing left-footed strike from the edge of the area after a fabulous run and cutback from Rafa Silva. André Almeida then doubled the visitors’ lead with a sharp finish despite pressure from onrushing goalkeeper Shuichi Gonda after an awful mistake at the back from Lucas.

However, in the second half, a rejuvenated Portimonense upped the tempo and found a way back into the game through Dener’s bullet header from a free-kick. Then, with 15 minutes remaining, Júnior Tavares produced a sublime curling effort from 25 yards that beat goalkeeper Odysseas Vlachodimos all ends up.

Now 2-2, this secured Paulo Sérgio’s side an unlikely point and helped them close to within five points of safety. Could this unexpected point be enough to kickstart a Portimonense revival?

For Benfica, it was a worrying capitulation, and it means that in the post-lockdown era, they are yet to win on two occasions; hardly the form of champions. Benfica were cruising up until the interval, but when they emerged for the second half, they looked a different team. They lacked the urgency possessed in the first half, and they failed to press their opponents with the same intensity when out of possession.

Maybe they thought everything was wrapped up; perhaps it was a subconscious thing. Whatever the reason, there is no denying Benfica took their foot off the pedal and paid the price with two points dropped.

Again, the fitness of their squad must be called into question. Just like in Benfica’s previous fixture, key players seemed to tire after an hour. This will be a concern for Bruno Lage as it is taking his players longer than most to get back up to speed.

The form of key marksman, Carlos Vinícius, is also alarming. Before the break, he couldn’t stop scoring, and now he looks devoid of confidence. Almost as if he needs a map to find the net. This is noticeably affecting the rest of his game, his first touch was particularly sloppy in the last match, and he hasn’t been making as many intelligent runs.

Carlos Vinícius was key to Benfica’s early season success so The Eagles will be desperately hoping he can recapture this form for the run-in or it could be a tough end to the season for them.

On the other hand, take absolutely nothing away from Portimonense because as much as Benfica’s performance levels may have dropped, they raised their own to take advantage of the situation. Paulo Sérgio continues to get the best out of his players and whatever he said at half-time must have resonated, as they were a side transformed in the second half.

Alongside team spirit, Portimonense have immense resilience and belief in their ranks. It would have been easy having secured victory last time out, just to come out and limit the damage; after all, losing to leaders Benfica wouldn’t have been a disgrace. Instead, they gave it a real go and were rewarded with a point. This sort of positivity and desire to scrap for every point, regardless of scoreline, or who their opponents are, bodes well for survival hopes.

Title rivals Porto duly took full advantage of Benfica’s draw by beating Maritimo by a goal to nil. Jesús Corona, impressive again, scored the only goal of the game with a spectacular lob from the edge of the area, six minutes gone. The result puts Porto two points clear at the top of the table with eight matches remaining.

While this was an improved performance from the Dragons, they still seem to labour in front of goal. The majority of Porto’s squad possessed superior technical ability to Maritimo’s playing staff, yet they were unable to put them to the sword. Porto supporters will be worried as they face better teams in the remaining matches and will need more than one goal to see them off. At the moment, Porto don’t look equipped to do that. Vincent Aboubakar always seems the most dangerous striker in the game, but at the moment, his on-field minutes are extremely limited.

Maritimo will too be worried. They haven’t won either of their first two matches since the league resumed, and have consequently been dragged into the relegation picture. Now sitting five points clear of danger, their performance against Porto was pretty dismal. In contrast to Portimonense, they didn’t seem to have any belief they could upset the odds, especially when the early goal went in.

For most of the match they were going through the motions, bereft of any offensive guile. Even when Alex Telles was sent off for the hosts with five minutes remaining, there was no pressure, and no throwing caution to the wind in pursuit of a late Maritimo equaliser. If they continue in this vein, they will find themselves in the relegation zone before long.

Paços de Ferreira share an unwanted tag with Maritimo, now also just five points clear of the relegation zone after a 1-0 loss to Sporting Lisbon. Jovane Cabral’s thunderous free-kick proved the difference between the two sides, though he could have had a brace if it wasn’t for the crossbar denying him right at the death.

Cabral, the returning Wendel, and the 18-year-old Eduardo Quaresma, who was making only his second career start for the club, all caught the eye. Quaresma looked assured in defence, making vital interceptions and tackles throughout the match, as well as showing composure with the ball at his feet. He seems destined to become a star in Liga Nos, and possibly one of the next Portuguese exports to star abroad.

It was a spirited display from Paços de Ferreira in a hard-fought match and Sporting’s ‘keeper Luís Maximiano had to make a string of excellent saves to preserve his side’s lead. The visitors will take courage from this, as Sporting under new manager, Rúben Amorim, look a well-polished side. If they can replicate this sort of performance in matches against mid-table teams, Paços de Ferreira will be confident they have enough to avoid the drop.

Sporting’s win moved them level on points with Amorim’s former side Braga, who lost 1-0 at home to Boavista. Braga have lost both matches since the league resumed and are in real danger of missing out on a Europa League place. They face pressure from the ever-impressive Famalicão, who followed up their victory over Porto with a convincing 3-1 win against Gil Vicente.

Famalicão remain fifth, just three points away from fourth. Braga meet Famalicão in the pick of the fixtures during game-week 27 of matches in the Liga NOS.

Don’t forget, Freesports continues to show live coverage of the league as it ramps up towards what looks to be a thrilling conclusion.