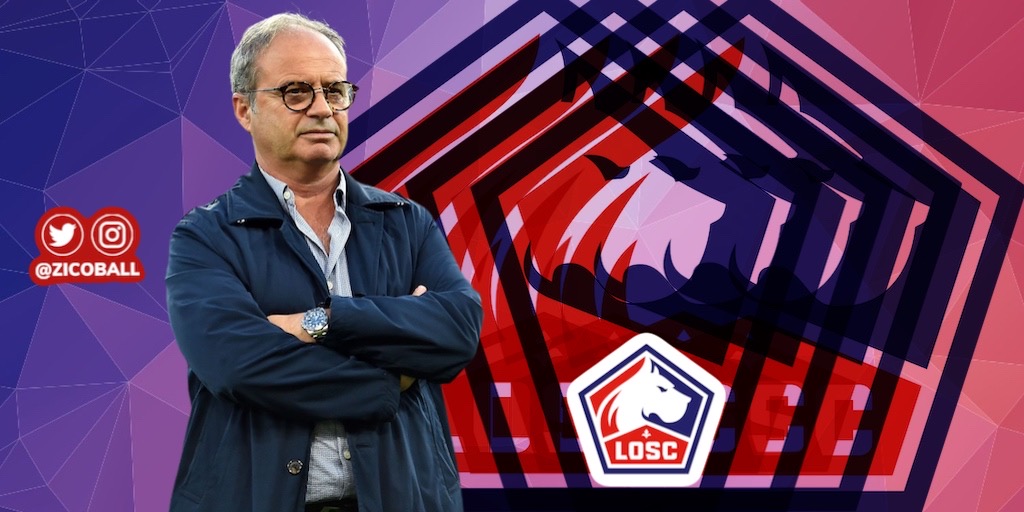 It is often the club’s playing staff who are the most sought after assets within the organisation, and with LOSC Lille are no different. However, one person stands out from the rest – Director of Football, Luís Campos.

In recent years, since Campos was appointed to the role in 2017, the club have made a welcome habit of signing the best unknown young talent from across the globe to make a profit on them in the future.

The 56-year-old Portuguese hasn’t only just begun to make a name for himself since joining the Lille ranks. He has a track record of finding players with former clubs too. However, he hasn’t always been a success or worked within the recruitment side of the game. If we look at the early foundations of the career of one of Europe’s most sought after recruitment gurus, and the years in which he made a name for himself, we’ll see how Lille developed into a destination for some of the best young talents in football.

Before Luís Campos became one of the masterminds of transfer windows, he was a manager, but you’d be forgiven for not knowing that. He began, like many, playing football throughout his youth before studying physical education at the University of Porto, taking him down a similar path to José Mourinho and Carlos Queiroz.

Upon graduating, Campos joined SC Espinho, who were in the Portuguese top tier at the time, as a fitness coach. From there, he went to União de Leiria to work as an assistant coach, but then at the age of 27, he became manager. Many clubs followed in the next 13 years. He gained a reputation, as did his teams, for the quality of football on display. On the odd occasion, he made the headlines, like when his Gil Vicente side ended Mourinho’s 27-game unbeaten start to the 2003/04 season with Porto, in April.

However, in the main, the headlines were more negative than positive. Campos gained an unwanted reputation for relegation and most notably oversaw two sides, Vitoria de Setubal and Varzim’s relegation in the 2002/03 season, and then inflicted the same fate on Beira-Mar in 2004/05. It earned him the rather unfortunate nickname of Luís Campas – ‘campa’ being Portuguese for the word ‘grave’.

Beira Mar would be his last job within football for the next seven years. Campos’ post following the head honcho role at Beira Mar would be one unfamiliar to him, and it would be a role that would transform his career. This switch in focus within his footballing career would ultimately set him on the way to becoming one of the biggest names in recruitment.

July 2012 represented a new career path for the man from Fão, a small coastal town in the north of Portugal, when José Mourinho invited him to join his backroom staff at Real Madrid.

One of Campos’ first recommendations was the Brazilian, then right-back and now Liverpool holding midfielder, Fabinho. Although he would only make a single appearance at the club, it was a sign of things to come. While at Madrid, he used his time to develop a new piece of scouting software, the ‘Scouting System Pro’ and was never afraid to offer an opinion.

His actual role in Spain was slightly unclear. Madrid employed him to help identify promising players while also doubling up as an opposition scout, a position that doesn’t exist in its own right. However, this played a pivotal part in what we now see from Campos in his more recent roles.

His primary approach is that there is no substitute for watching players in the flesh, meaning he spends more time travelling and living in hotels – something that represents the work of a scout.

In an interview with Duncan Castles for Yahoo, Luís Campos said: “For me, live observation is fundamental. For example, a small detail such as observing how a player warms up before a game or coming on a substitute reveals much of his character.”

“And character is an essential marker in detecting a top talent”.

All this set him on his way and in the summer of 2013, he left Real Madrid to join Monaco, initially becoming an advisor to club president Vadim Vasilyev and then, a year later, becoming technical director.

The change of job is where Campos came into his element. His first summer transfer window in 2013 was a rather expensive one, forking out around £150m on stars including Radamel Falcao, James Rodríguez, and João Moutinho. But owner, Dmitry Rybolovlev, realised that that level of spending would be unsustainable. This culminated in Campos’ change of role, and it is where he flourished.

Using his networks and the scouting software he developed at Real Madrid, he assembled a squad of up-and-coming young players and more importantly, one which had immense resale value. The team included Bernardo Silva from Benfica for £12.1m, Tiémoué Bakayoko for free from Rennes, Fabinho from Rio Ave, and Thomas Lemar from Caen, both for free, as well as Benjamin Mendy from Marseille for £11m.

Luís Campos had already left for Lille by the time Monaco, led by Leonardo Jardim, won Ligue 1 and reached the Champions League semi-finals, losing to Juventus. The European run in 2017 featured talents that Campos had recruited along with youth-team graduate Kylian Mbappé, whom he also had a hand in bringing to the club. The players he brought to sunny Monaco would help them generate close to £1 billion in transfer fees.

Following Monaco’s title win, Campos vowed to create ‘other masterpieces,’ but no one expected him to do it while at Lille.

LOSC Lille owner Gérard Lopez took over the reins of the club towards the end of 2016 and made Campos his top target to head up the recruitment team at Les Dogues.

In less than a year, he oversaw the departure of 22 players, with 17 coming in the other way, along with Marcelo Bielsa leading the first team for the 2017/18 campaign. The high hopes that the club had for the season were very quickly dashed, as the club massively underachieved.

Lille only gained 12 points for the first 13 games, and subsequently, Bielsa was relieved of his duties. Christophe Galtier was the manager brought in to replace El Loco. He had enjoyed several successful years with Saint-Étienne and helped Lille avoid relegation to Ligue 2, finishing in 17th place. Campos would have been forgiven for thinking his past endeavours were coming back to haunt him in his new role, but the following season couldn’t have gone much better for him and the northernmost French club.

A perfect example of the talent of Luís Campos is ultimately the least exciting of those transfers, Jose Fonte. At the time, he was 35-years-old and had failed to impress at his two previous clubs, West Ham United and Dalian Yifang. Many expected little of him, but Campos had identified a player who was a perfect match for the project at hand. Since his arrival, Fonte has been one of Ligue 1’s standout defenders, providing leadership and experience.

Zeki Çelik was plying his trade in Turkey’s second division for İstanbulspor before Lille’s director of football landed him for just over £2m. The Turk is now touted as one of the best young right-backs in the league and a credit to the recruitment methods of Campos.

Not only were the 2018 summer signings eye-catching, but the previous year’s recruits who had underperformed finally came into their own. Thiago Mendes, who arrived from São Paulo for £8m struggled in his first season, but became one of the most effective holding midfielders in the league, and earned a move to Lyon in the summer of 2019 for £22m.

The most impressive incoming from that 2018/19 season was winger Nicolas Pepe, who came to the club from Angers in 2017 for around £9m. The Ivorian scored 23 goals in all competitions and provided 11 assists. Pepe was named in Ligue 1 Team of the Year, culminating in a move to Arsenal in 2019 for a £72m fee; a considerable profit for the Ligue 1 club.

While the club didn’t achieve the heights of 2018/19, they did finish 4th in Ligue 1 in 2019/20, earning Europa League qualification for the 2020/21 season. More talent was brought through the door including Victor Osimhen from Belgian side Charleroi, and Renato Sanches from Bayern in the 2019 summer window, who went on to make a significant impact for Lille.

Osimhen finished top scorer and earned a move to Napoli in the 2020 summer transfer window for £70m, amassing the club over a third of what they paid for the young Nigerian forward.

This summer has brought more young talent through the door at Stade Pierre-Mauroy, with the Canadian Jonathan David brought in for around £30m from Belgian side Gent, and former Manchester United player, Angel Gomes, on a free.

Speaking to the BBC, owner Gérard Lopez said: “We are a destination that young players love. They know we are going to trust youth.”

“Last year we played with the youngest squad in the Champions League, so it’s an attractive destination for a young player.”

Although many would say that much of the club’s success is down to the work of Galtier, which isn’t untrue and he does deserve a lot of credit, none of this would have been possible without Campos.

Campos is very good at consistently bringing in good players and players from areas he knows well, like France and Portugal, as well as players from further afield. It is, however, the small fees he brings these players into the club which sets him apart from the rest. His approach varies; older players on free transfers who are low risk and consistent performers, and also recruited players between the ages of 18-23 for fees of below £5m.

With these players, there is an understanding that they aren’t going to be world-beaters from the get-go. However, it is when spends reach close to or over £10m, that there is an expectation to perform from the very start.

Campos is and has been ruthless in bringing it in young talent at the end of their contracts. Players who have been disenchanted by their clubs and haven’t been offered a route into the first team. The club, and in this case, Lille, then reap the rewards when such talents move on after only a couple of seasons. Having performed exceptionally well and gained first-team experience in a big European league, they then move on for sizeable fees and help the club in the longer term.

Luís Campos has made a name for himself and quite rightly so.