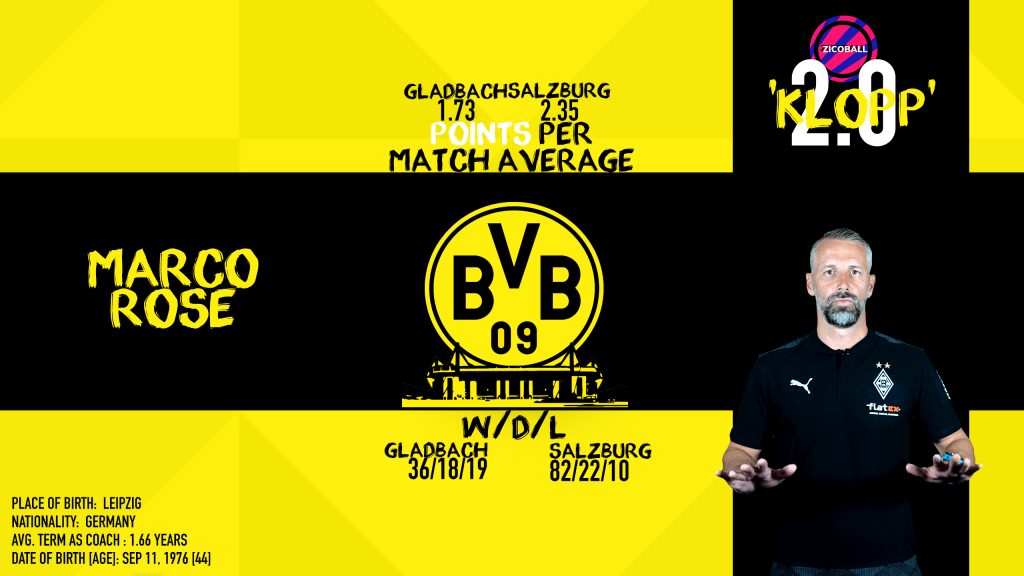 Germany has gone through a coaching renaissance over the last decade. The country which has produced so many talented footballers has started to create world-class coaches with consummate ease.

There is former Leipzig manager Ralf Rangnick, who hired Thomas Tuchel at VfB Stuttgart. Tuchel then joined Augsburg II, where he coached a team that included Julian Nagelsmann, an injury-prone defender who seamlessly transitioned to a coaching career after Tuchel instructed him to scout for the club in 2008. Subsequently, Tuchel progressed and took the reigns at Mainz when Jürgen Klopp left for Borussia Dortmund.

Like his fellow German coaches, Klopp had a protégé at Mainz when he presided over the club; Marco Rose, the outgoing Borussia Mönchengladbach and soon-to-be Borussia Dortmund manager.

The man labelled as Klopp 2.0 is primed for bigger and better things, and it was under Klopp that he began his journey.

Klopp and Marco Rose spent six years together at Mainz, winning promotion to the German Bundesliga together and qualifying for the UEFA Cup. The current Liverpool boss left in 2008 to take over at Borussia Dortmund, while Rose stayed behind and began his coaching career, initially as an assistant coach at Mainz.

Klopp has high praise for his student;

“I trust Marco Rose in everything,” he said. “Marco can have any job and could do any job too. He is really the most hyped [coach] of all at the moment. Everyone is asking about you”.

Borussia Dortmund have had a torrid time this year compared to last, where they became one of the most feared sides in Europe. This season, Dortmund are in danger of missing out on Champions League qualification. They lie sixth in the table, having won only one of the last six league games.

Dortmund are a shadow of the team that took Europe by storm last campaign, now leaking goals left, right, and centre. The club has long followed Marco Rose as their potential manager, even as far back as 2015, to replace Klopp.

The club has their wish after all these years. Rose will take over as manager in the Westfalenstadion in the North Rhine-Westphalia this summer.

Marco Rose’s first primary job was at the Austrian outfit, Red Bull Salzburg. Rose headed to Austria after leaving Germany. He quickly won the U-18s league title and the youth Champions League with Salzburg but would take over the senior side due to his excellent work with the younger players.

A youth set-up hailed as one of the most prominent academies in European football. Rose’s team won the Austrian Bundesliga and reached the Europa League semi-finals, beating Borussia Dortmund, ironically, and Lazio, en-route. Rose never lost a home game during his tenure as Salzburg’s head coach.

Rose’s Salzburg consisted of a 4-3-1-2 with a diamond midfield in the centre of the park. The primary creative role in the side is found in central attacking midfield, or, rather, the ‘Trequartista.’ An advanced midfielder who has less defensive duties and is more concerned with finding space for short, quick passes in the opponent’s half of the field.

The versatile Austrian, Xaver Schlager, filled this spot and could also play as the deep-lying midfielder or on the left-wing. Rose’s Salzburg side contained many now-familiar faces like Takumi Minamino, Hwang Hee-chan, and Amadou Haidara.

Salzburg made full use of their diamond and looked to play in a vertical shape while using several combinations in midfield. The defence of Lainer, Ramalho, Caleta-Car, and Ulmer would often circulate the ball to find gaps in opposition set-ups. The ability to find teammates with key passes through the lines was crucial, and it was the central striker who would come short to show for the ball; this would leave space behind for the attacking mid to exploit.

One-twos and quick passes were the name of the game at Salzburg. They were reluctant to go wide, but in their full-backs, Stefan Lainer and Andreas Ulmer, there would be support if the need was apparent. As the ball was played into one of them, it would drag the opposition full-back out, effectively creating a 3v2 or a 3v3 situation when on the offensive.

A standard component of the modern-day German manager seems to be the intense pressing system. Salzburg allowed an average of 6.6 opponent passes before a defensive action was completed. That number ranked as one of the best in Europe, comfortably higher than Liverpool and Manchester City.

Additionally, they completed 14.32 passes on average before the opposition managed to dispose Salzburg of the ball. Rose’s men would often go into a 4-3-2-1 or even a 5-3-2 while defending, stopping counter-attacks from arising.

Rose, seeking pastures new, left Austria to join sleeping giants Borussia Mönchengladbach in Germany, in 2019. He carried over his knowledge from Austria and added tweaks to his game with better players at his disposal. The formation of 4-2-3-1 focused more on quick transitions and the importance of full-backs in build-up phases.

The full-backs are very important, as they attempt to play through wider channels rather than central ones when playing out from the back. The relationship between the right-winger and right-back became significant for Rose at Gladbach. Quick attacking transitions and playing through the middle was still crucial to Rose, but not as often as the manager might have tried with Salzburg.

The pressing system caters more toward individuals than spaces, unlike his time at Red Bull Salzburg. For example, when the opposition goalkeeper had the ball, the striker may or not press the keeper depending on the circumstances; the press goes far beyond just the front four to include the midfield two and the full-backs.

Both full-backs will frequently line themselves up with the opposition full-backs to eliminate longer balls or forward passes in the wide areas. The defensive midfielders will usually engage with opposition central midfielders.

Mönchengladbach strongly desires to force their opposition into wide areas. Here, they set up effectively to win back possession and engage their full-backs in the attack. The press emphasises that even when they don’t have the ball, they look to win it back and go on the attack right away; this is why quickness in transition is vital.

Dortmund have the players for quick transitions with top quality full-backs such as Raphaël Guerreiro. They also have players that work in rapid shifts during a counter-attack. The pace in that Dortmund side with Rose’s high pressing system could be a match made in heaven.

Borussia Dortmund have waited nearly six years to get Marco Rose, their Klopp 2.0. Wouldn’t it be ironic if he followed in his mentor’s footsteps and brought a league title back to Dortmund. Toppling Bayern Munich’s dominance as Klopp did all those years ago would be somewhat poetic.