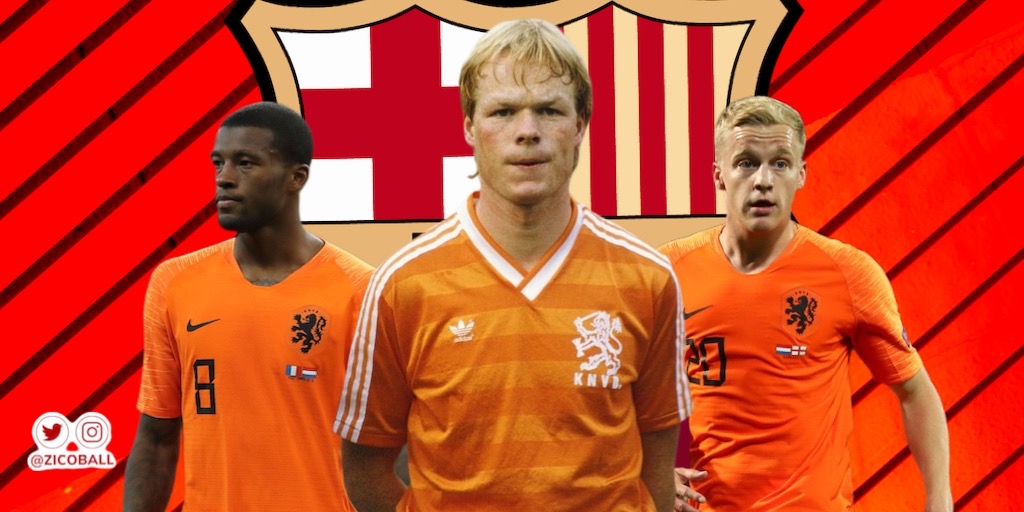 Ronald Koeman’s playing career is one fondly remembered in Catalonia. After amassing over 200 appearances, the towering centre-half waltzed back to the Netherlands with a trophy cabinet laden with silverware.

Four successive La Liga winners medals from 1991-94, and a European Cup triumph with Koeman scored the only goal, showcased the enormity of the dominance shown by his Barça team.

Playing under fellow Dutchman and club legend, Johan Cruyff, the dead-ball specialist with a traction engine in his boot won the hearts of those of a Barcelona persuasion. It is that impactful wave which Koeman rides into the club today, ready to undertake one of the most prestigious roles in football.

The Netherlands’ impact on Barcelona is vast. Starting with Cruyff and the footballing culture which followed him, the Spanish superpower has welcomed a plethora of Dutch talent; Koeman, Patrick Kluivert, the De Boers, Mark van Bommel, Edgar Davids, the list goes on.

Well, that trend may just continue. The 8-2 thrashing in Portugal has prompted change within Barça’s hierarchy, and anyone who watched the dismal showing will agree those changes will also be needed on the pitch. With Luis Suarez rumoured to be returning to Ajax, and Sergio Busquets and Gérard Pique reaching the twilight stage of their careers, an overhaul of the Dutch variety may be in order.

Ajax’s Donny van de Beek has emerged as someone high on Koeman’s list of potentials. Frenkie De Jong’s presence, alongside the former Netherlands boss, is likely to perk the interests of all parties. A €30m-€40m fee is touted to be enough to land the 23-year-old, but there is rumoured interest from Old Trafford.

A recently-crowned Premier League champion is said to be a genuine option for Koeman, after having his say during the humiliating defeat at Anfield last season. Gini Wijnaldum, a man so clinical in orange, offers an interesting alternative to van de Beek. With Liverpool seemingly so intent on bringing Thiago Alcantara to the North of England, and Wijnaldum yet to sign a new contract at Liverpool, there could be legs to the prospect of a switch.

Juventus’ interest in Dutch youngster Donyell Malen is concrete. However, the arrival at the Camp Nou of the man who handed him his debut at international level, could just affect his eventual destination. The PSV Eindhoven forward is hot property after an impressive season in the Netherlands, and joins Calvin Stengs and Steven Bergwijn as the country’s most anticipated.

As Barça preps to revert to its roots with the hiring of Koeman and Cruyff’s Netherlands infused philosophy hopeful of accompanying him, promoting youth from within will come hand in hand. The successful era that culminated from Cruyff’s entrance was a by-product of harnessing raw talent from the academy and instilling Barça DNA into those willing and capable; Pep Guardiola, Xavi Hernandez, and Andres Iniesta, the three derived from that mould who automatically spring to mind.

Eric Garcia, Barcelona-made, but Manchester City-owned, looks set to make his return. The former academy graduate will help fill the void of Pique’s impending departure this summer or next. Guardiola is a fan of the Spanish central defender, although Kalidou Koulibaly is the defensive priority for Pep, as he attempts to add to Nathan Ake’s bolstering of the defensive line.

Koeman’s Barcelona is one of change, nostalgia and hope. The club’s head-honchos are fully aware money needs to spent, and the Dutchman will be backed in the transfer market.