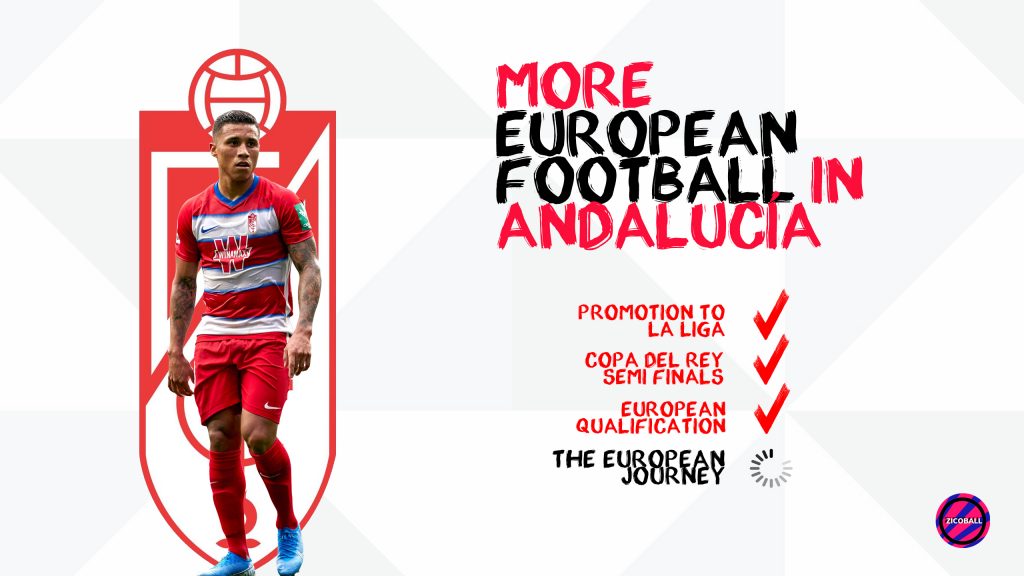 The region of Andalucía, in the South of Spain, has become accustomed to European football. With Sevilla being perennial winners of the Europa League over the last 15 years, and the likes of Real Betis and Malaga flirting with football on the continent in the past, the allure of European football hasn’t been so far from home.

But never did the region, and especially people from the area of Granada, expect to see their hometown club, Granada CF, achieve European football. However, that is precisely what they have done in what was a remarkable first season back in La Liga for the Rojiblancos. The club achieved European football for the first time in their history, while also reaching the semi-finals of the Copa Del Rey.

Granada Club de Fútbol were formed in 1931, initially as Recreativo de Granada. They finished 2nd in their first season, 1931/32, in the Tercera Regional – Región Sur. This resulted in them getting promoted to the Segunda Regional.

The following season, 1932/33, the club recorded its most significant victory to date, an 11-0 thumping of Xerez FC.

Many years later, and after several promotions, the club made its La Liga debut in the 1941/42 season. During the season they had some truly remarkable results, including an 8-0 win over Real Oviedo, and a 6-0 win over Barcelona, of all teams.

El Graná would spend the next 40 years yo-yo-ing between the first and second tier of Spanish football, with their golden years arriving during the 1970s where they competed in eight top-flight seasons, including their highest league finishes of 6th in both 1971/72 and 1973/74.

But it was in 1959 that the club had its greatest achievement, finishing runners-up in the Copa del Generalísimo (now known as the Copa Del Rey). Granada came up against Barcelona and unfortunately for them, lost 4-1 at the Santiago Bernabéu.

The Matagigantes spent the next two decades mostly in the third tier of Spanish football, accompanied by a worrying drop to the fourth tier due to non-payment of its players the season before.

The next four years were spent trying to get out of the Tercera División, which they achieved in 2005/06 when they won the league after former Real Madrid president Lorenzo Sanz, along with his son Paco, arrived at the club. Unknowingly on their arrival, they would bring severe financial trouble further down the line. The president, along with the support of the fans, continued to lead the project with the explicit intention of taking the club back to the top-flight. But with Granada middling out in the third tier after promotion, hasty actions were taken. In 2009, the club was in such a financial predicament that it was on the brink of ceasing as a business altogether.

A solution to climb up the Spanish football ladder was found when Granada signed a partnership agreement with the Italian side Udinese. Granada inherited a number of players contracted to the Italians, as well as their youth and reserve players, and it paid off handsomely.

Following the agreement, Rojiblancos went on to win their group in the third tier in 2009/10 and then promoted via the playoffs, returning to the Segunda División for the first time in 22 years. The Andalusian outfit then achieved back to back promotions after finishing 5th in the second division in 2010/11, beating Celta Vigo and Elche to become the first winners of the new promotion playoffs and end a 35-year La Liga absence.

Granada, for the next six seasons, became the survival specialists, before finishing rock bottom in 2016/17, a season which saw Tony Adams show up for a brief stint to try and steer the club away from the drop. Adams was unable to help as his training methods were questioned, and we all know how ridiculous that looked.

No one would have predicted that the hiring of, then new manager Diego Martínez, would lead Granada to not only promotion, but a 7th placed finish in La Liga, and a semi-final appearance in the Copa del Rey. The promotion was perhaps a more realistic possibility and the new man duly delivered. Martínez brought instant success as El Graná finished runners up to Osasuna in the 2018/19 Segunda División.

Going into the 2019/20, Granada were odds-on for an immediate return to the league they had scrapped their way out of. Still, they hadn’t read the script, beating Barcelona 2-0 in their 5th game of the new season, and five weeks later found themselves top of La Liga, albeit only briefly.

The club went on to lose four of their next five games, drawing the other, but Granada perceived this as a good run of events. It reminded them of who they were; the team certain for relegation despite previously sitting top of the tree in La Liga. Considering their starting eleven cost roughly £6 million – including the likes of 34-year-old former Tottenham reject Roberto Soldado, it was quite the start.

Granada remained inconsistent in terms of results for the next few months until the start of February. From February onwards, Grandad only lost four more games till the end of the season, a rich vein of unexpected form that propelled them into European contention.

From the restart of La Liga following the Coronavirus pandemic, Diego Martínez’s side impressed. Their post-lockdown form was up there with the top teams in Spain. Going into the final league game, Granada needed to beat Athletic Bilbao and hope Getafe would drop points at Levante.

Granada did their bit, hammering Bilbao 4-0, the team who they had knocked them out of the Copa del Rey semi-final on away goals in March; revenge.

Levante did beat Getafe 1-0, and with that, Granada slipped into the final Europa League qualifying spot on the final day. European football was coming to the Nuevo Los Cármenes for the first time in its history. It was a night worthy of celebration with all Granada fans, who unfortunately weren’t present to congratulate the team on what was a famous night for the club.

Granada did a lap of honour to the enforced empty stadium. A collective showing to those at home that they were at the forefront of the club’s thoughts. The achievement was for them, and whoever was suffering in the grips of the pandemic. Martínez, only 38 years old and the youngest manager in the top-flight, spoke after the game: “We felt them close, even though they weren’t there. They can be proud of the red and white shirt.”

The Rojiblancos won’t have long to wait to for their first taste of European football, as they face Albanian outfit Teuta in the Europa League second qualifying round on the 17th September. A third-round tie against either Locomotive Tbilisi of Georgia or Dinamo Moskva of Russia will be awaiting the victors.

Granada may not push on from the success of 2019/20, and may even revert to their old ways of galavanting through the divisions, but under the stewardship of Diego Martínez, it is hard to see them dropping off altogether. Statements like the following should comfort Granada fans that they’re in good hands:

“If this team has been successful, it is because it has been realistic and transparent with our reality, with the type of team we are. In moments of euphoria, we have to know who we are, what it cost us and what our reality is because, from coherence and reality, we become stronger.” Diego Martínez – Granada CF Manager