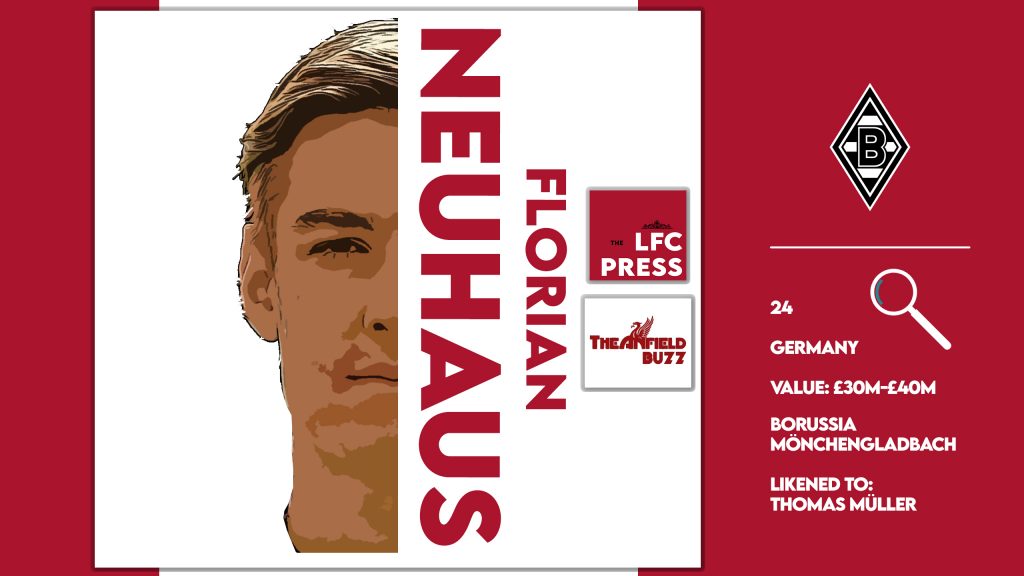 Florian Neuhaus transfer links to Liverpool Football Club have intensified since the end of the Premier League season.

According to @Plettigoal, the Mönchengladbach man is high on Klopp’s list, following Gini Wijnaldum leaving the reds on a free.

It’s reported that Klopp will act after Euro 2020, with Neuhaus currently part of the Germany set-up. Ahead of the tournament, Joachim Löw had his say on the player, “Flo is a very good footballer with a lot of football intelligence. I’m delighted with his progress.”

Despite the praise from the head coach, Neuhaus hasn’t stepped foot on the pitch so far this summer.

The club would be making a dire mistake not filling Gini’s void, and in Neuhaus as a transfer target, rest assured Liverpool would be getting a forward-thinking creative in his place.

In the Bundesliga this term, Neuhaus ranked 3rd in Through Balls, 5th in Progressive Passes and 7th in Progressive Carries. Such progressive stats highlight the attacking impetus which comes with Neuhaus in central midfield.

Against Inter Milan in the UEFA Champions League, the German’s passing abilities were on display on the biggest of stages. This assist below encapsulates Neuhaus’ range of passing in a nutshell…

After honing the defensive side of his game under Marco Rose, Neuhaus now operates as a box to box midfielder for ‘Gladbach.

However, Neuhaus believes his best position is in the ‘10’, attracting comparisons to Thomas Müller in the way he locates space and links with the forward line. Here, Neuhaus is at his most dangerous, able to pick the lock of the most robust of Bundesliga defences.

In front of goal, Florian Neuhaus is no stranger to conjuring a piece of magic.

Six goals in 33 Bundesliga games in 2020/21 is not to be sniffed at from midfield. Still, you would imagine his tally would increase in Liverpool’s engine room alongside Thiago, Fabinho, or Jordan Henderson.