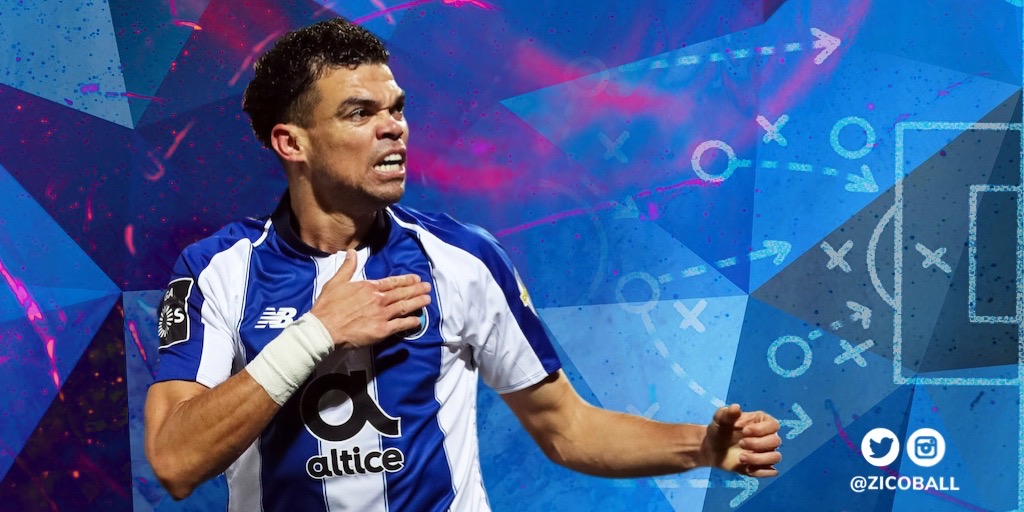 In the summer of 2017 when Pepe exited Real Madrid after a glorious decade in the Spanish Capital, it seemed that his career was nearing its final chapter.

Those ten years saw Pepe win three La Liga titles, two Copa del Reys, three Champions Leagues, one Super Cup and two Club World Cups. It was quite conceivable that he would disappear from the footballing spotlight forever to quietly finish his playing days at a considerably smaller club, in a smaller league for a few months. How wrong those assumptions proved.

Three years later, and now 37 years of age, the veteran Portuguese central defender has just been made club captain of Porto, having played an instrumental part in helping them to a league and cup double last season.

His glittering international career, which so far includes a European Championship winners medal and the inaugural UEFA Nations League title, also shows no sign of slowing down. Starts in games against France and Sweden at the beginning of October took his tally of caps to an astonishing 113; only Cristiano Ronaldo, Luis Figo, and Wolves’ João Moutinho have made more appearances for Portugal. Furthermore, he is widely expected to be named in their Euro 2020 squad should the tournament take place next summer as planned.

“He shows no real signs of decline for the Selecao, and was excellent during the recent international break. The national team are a little bit light in terms of proven centre-backs, but I don’t believe this to be the primary reason for his continued selection. He remains an integral player for Fernando Santos,” said Jamie Farr, Liga Nos analyst for Football Radar and writer for Portugoal.

This is an astounding feat, considering that most players tend to retire from club football in their mid-thirties at the very latest, never mind still continuing the rigours of international football. They also typically don’t bother finding other suitors when they’ve had such a long, successful spell at a distinguished club such as Real. Pepe, though, is an exception. Having had 18 months at Beşiktaş in Turkey, Pepe returned to the club where he made his name in the early noughties.

Last week, as Porto played out an intriguing 2-2 draw with rivals Sporting Lisbon, Pepe’s class and experience shone through. He made several last-ditch clearances and challenges which averted danger at crucial moments. The defender showed leadership to guide teammates away from the referee when decisions angered them to prevent them from picking up needless bookings for dissent.

Pepe also demonstrated his attacking threat, heading a corner narrowly wide of the target three minutes in – the run was timed to perfection after evading his marker effortlessly. The individual performance as a whole was so good that Pepe was awarded man of the match.

“Pepe is a hugely important player for Porto, particularly since the recent departure of senior figures in the squad like Danilo and Alex Telles. The partnership he has formed with Chancel Mbemba has been very strong, and he remains a leader on the pitch. His experience is unrivalled, and I think this is a key aspect on and off the pitch,” said Farr.

The Liga Nos may not be seen as an elite standard in European football, but it certainly isn’t far off. It is incredibly competitive and filled with upcoming talent that regularly catches the eye of teams from the top five European leagues. The aforementioned Telles and Carlos Vinicius were two of the latest exports to the Premier League on transfer deadline day, joining Manchester United and Tottenham Hotspur respectively. They followed the likes of Bruno Fernandes, Ederson, and Raul Jimenez who have all made the successful transition in recent seasons.

Elsewhere in Europe, João Félix and Éder Militão have made big money moves from Liga Nos to Spain over the last couple of years, whilst Danilo Pereira joined Ligue 1 giants Paris Saint-Germain this summer.

The fact that such players cut their teeth in Liga Nos before enjoying success in the elite leagues proves that it is a desirable level of competition and claims that it is an ‘easy league’ is way off. Pepe is going up against the stars of tomorrow, as well as current class acts like Benfica’s Pizzi, and is often coming out on top – for that he deserves an immense amount of credit.

Recent performances in his homeland have certainly earned him adulation from the Porto fans according to Farr: “I believe Pepe is a very popular figure amongst Porto fans. He can be considered something of a returning hero having left the club in his younger days for Real Madrid, a move that most fans would have accepted given his talent and potential. To have him back at the club playing to the level he has done and helping the team add more silverware to their collection will surely have only endeared him further.”

“In general I think he has a strength for the big games, no more so epitomised by his display in possibly the biggest game of his career against France in the Euro 2016 final. In certain circles, he is more known for his infamous behavioural shifts, but it would be a mistake to not recognise his ability to thrive when it matters most, and this looks like an attribute he has not yet lost.”

Following Porto’s domestic success last season, they qualified for the Champions League group stages. Starting in promising fashion with one win and one defeat from two games, Porto are sitting second in a difficult looking Group C. Pepe has played every minute of both fixtures and although he was at fault for giving a penalty away against Manchester City, he has shown that he still has the pedigree to compete in Europe’s flagship domestic competition.

For now, Pepe’s attention will turn to helping his side close down the five-point gap to Benfica at the top of the Liga Nos. The Centre-Back will be hoping that come the end of the season he will, once again, have added to his ever-expanding silverware collection in his illustrious and continuing career in the sport.