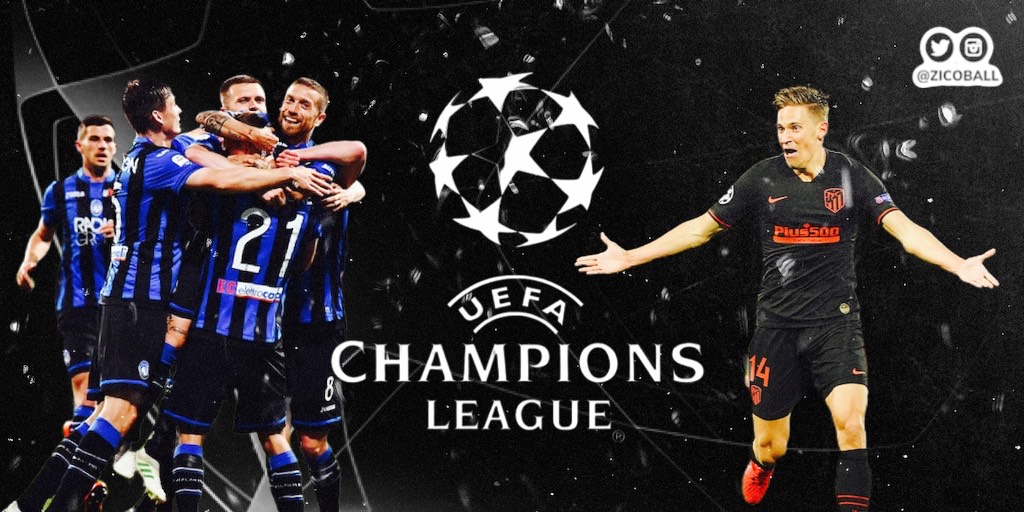 The draw for Europe’s premier competition took place on July 10th, and the whole football community has been taking turns, talking about which team will win it all. Interestingly, only one of Bayern Munich, Manchester City, Barcelona, Real Madrid, and Juventus can reach the final.

UEFA’s festival of football will be held in Lisbon, Portugal. COVID-19 has forced new changes to the tournament which will be held over 16 days. The new format of the Champions League has one knockout game for each tie, rather than spread out over two legs. The decision to host the remaining fixtures over 90 minutes and at a neutral venue, makes it the most open competition in recent years, by far. All games will be held at either Benfica’s Estádio do Sport Lisboa e Benfica and Sporting CP’s Estádio José Alvalade.

This means that between RB Leipzig, Atalanta, Paris Saint-Germain and Atletico Madrid, one of the finalists will have the opportunity to win the competition for the first time in their history.

Let’s start with the remaining Round of 16 games before delving into the quarter-final matchups of the Champions League. Kindly note that these are just my predictions. Football is an intriguing game, which produces moments of brilliance, moments of madness, and costly mistakes, but every game starts at 0-0.

Following the Round of 16 predictions, said team will be pit against their subsequent and hypothetical quarter-final opponent.

REMAINING ROUND OF 16 TIES

Current status: 2-1 away win has put the Citizens in control.

Pep Guardiola’s men are not just expected to progress from the tie; they are also the bookmaker’s favourites to win the competition. One of the reasons being that Real Madrid captain, Sergio Ramos, is suspended after a red card in the first leg. Without their defensive leader, Los Blancos will face problems against the high-flying City attack. Since the restart of football, the Citizens have scored 25 goals in just eight games. The lockdown has not had any adverse effect on City; in fact, they look sharper and hungrier.

The 4-0 hammering of Liverpool, the new Premier League champions, was a statement win. Despite losing the league crown, Guardiola’s men are still chasing a domestic double and European glory for the first time. Kevin De Bruyne has, arguably, played better since the resumption of football and even with the absence of Sergio Aguero, Manchester City look amazing.

Meanwhile, Real Madrid have a three-point advantage over Barcelona in the league race, but a lot of their wins have been scrappy. 1-0 wins against Espanyol, Getafe and Athletic Bilbao have all had debatable penalty decisions. Overall, Zinedine Zidane’s men have scored only 15 goals in 8 games. Led by Thibaut Courtois, Varane, and Ramos, Real Madrid have the best defensive record in the top five European leagues this season. However, Madrid will need to prove their worth at the other end of the pitch, as they have to score at Etihad Stadium to progress.

With all due respect to Zidane’s team, Los Blancos will have to be content with only the La Liga trophy this season.

Due to the coronavirus pandemic, the first leg between these two sides looks like a distant memory. Napoli allowed Barcelona the lion share of the ball, and Gattuso’s men were extremely compact in their 4-5-1 shape. Things have changed since the restart of football. Napoli defeated Juventus to win the Coppa Italia, whereas Barcelona have dropped six crucial points against Sevilla, Atletico Madrid, and Celta Vigo in the race for La Liga.

Many pundits are giving Napoli a chance, especially considering Barcelona’s struggles under Quique Setien. However, the width of the Camp Nou pitch will make it impossible for Gattuso’s men to defend and counter their way into the last eight.

Napoli have registered only ten goals in seven games since the restart. They needed penalties to defeat Juventus in the cup final and lost 2-0 to Atalanta. I predict Barcelona will get the job done against the Italians.

Current status: 1-0 lead for Lyon. Sarri’s men will have the home advantage for the return leg.

The aforementioned loss to Napoli in the Coppa Italia final was a huge setback. Yet, Juventus now seem to be heading in the right direction after four wins from six games, with an aggregate of 17-7. The Serie A leaders should be able to turn things around against a Lyon side who have not played since February because of the cancellation of Ligue 1.

The goalscoring blitz of Cristiano Ronaldo and Paulo Dybala has been welcome. Expect Sarri’s men to get the job done.

Current status: 3-0 away win for the German champions makes this game a formality.

Let’s settle the debate over this game with stats. Bayern Munich won all ten games since the restart of football to win the domestic double in Germany. Bayern scored 31 goals and conceded only 8. In England, Chelsea have won 5 out of 7 games since the resumption. The blues have scored on 13 occasions, but they have also leaked a worrying ten goals.

The question is not whether Frank Lampard’s team is capable of scoring goals or not; their defence just cannot be trusted. With Timo Werner and Hakim Ziyech already signed, and more arrivals expected, Chelsea will have a much better chance next season.

This has to be the most mouthwatering game in the quarter-finals this year. Neither side is expected to keep a clean sheet, let’s put it that way. PSG’s all-star attack versus Atalanta’s fearless football will be a spectacle. Atalanta are a difficult team to judge, they have scored seven goals on three separate occasions this season, as well as eliminating Juventus from the domestic cup. However, Gian Piero Gasperini’s team have also lost to Spal, Fiorentina, Bologna, Cagliari, Torino, Dinamo Zagreb, and Shakhtar Donetsk this season.

Atalanta have flown out of the blocks since the resumption of football. Gasperini’s men are unbeaten in 7 games, scoring 17 goals.

Just like Lyon, Paris Saint-Germain have also not played any competitive football since the 2-0 win against Borussia Dortmund. The Parisians started training on June 25th, and they’ve also organised three friendlies in July. Furthermore, the French Champions will face Saint-Etienne and Lyon, in two Cup finals on 24th and 31st July respectively. As mentioned at the beginning of the article, Paris Saint-Germain have an excellent opportunity to reach their first final in the club’s history with all the favourites, including Bayern Munich, Manchester City, and Juventus, crossing each others path.

Thomas Tuchel should win the Champions League with this amazingly stacked Paris squad. The final is definitely in reach for the Tuchel’s French outfit. The German coach kept his job after the shocking elimination against an injury-hit Manchester United last season, but if PSG lose to Atalanta, Tuchel will be shown the door.

PSG should just edge this one, but expect goals.

There is a very famous saying in boxing; ‘styles make fights’. What makes this clash so intriguing is that these two clubs could not be more different. Julian Nagelsmann’s team are a high pressing side who thrive when allowed to break into space. Leipzig can also dominate the ball to create their openings, as they showed against Tottenham in the Round of 16 tie.

Diego Simeone’s team are all about a solid, organised defence, and pace of the front two on the break. Expect Leipzig to dominate the ball, although they will be without the talismanic Timo Werner. Nagelsmann’s men will likely have difficulty in breaking down Atletico Madrid’s 4-4-2.

Leipzig’s form after the restart was a real mixed bag, which cost them the chance of a Bundesliga title. Out of 9 matches, Nagelsmann’s team drew four times and lost once. The lack of experience for this Leipzig side will be a factor, as their opponents Atletico Madrid can boast two Europa league triumphs under Simeone, and are also two-time Champions League finalists (2014 and 2016).

Atletico Madrid should prove too resolute at the back, with the same fate falling to their opponents, that Liverpool endured previously.

Just like RB Leipzig and Atletico Madrid, these two clubs are in very different situations. Both teams have changed managers this season, but the aftereffects have been completely opposite of what was expected. Hansi Flick was supposed to be the interim coach in Munich until Bayern got their target. Quique Setien was supposed to be Barcelona’s saviour, tasked to bring the Cruyff-Guardiola style back to the Camp Nou.

In reality, Hansi Flick has transformed Bayern Munich. From an inconsistent side under Niko Kovac, to a contender for a historic European treble. Setien, on the other hand, has not settled on his best 11 or even a fixed formation.

Barcelona have failed to find the best position for £120m signing, Antoine Grizemenn. Deploying the Frenchman wide has not worked. The 4-4-2 setup worked well against Villarreal, but Bayern Munich will walk straight through that. The diamond midfield system (with Suarez and Grizemenn ahead of Messi) leaves them short of numbers when defending. Lionel Messi is 33 years old, and he is predominantly excused from too many defensive duties. Ousmane Dembele cannot catch a break with injuries, and Luis Suarez is showing his age.

Barcelona should beat Napoli in the second leg of the Round of 16 tie, but there are too many self-inflected problems for the La Liga club.

In contrast, Bayern Munich have looked strong in every area of the pitch. The Bavarians are on a 25 match unbeaten run. A team doesn’t get this type of consistency unless they are secure in every position. Any team that has Lionel Messi shouldn’t be underestimated, but Barcelona’s struggles in La Liga suggest that Flick’s men should progress.

The Bavarians should brush Barcelona aside. Although where Messi is concerned, we can never be so sure.

We have discussed City’s form since the restart, and the lifting of the two-year Uefa ban will motivate them further. Additionally, Pep Guardiola is desperate to win the Champions League. The trophy has evaded him since 2011, despite creating two dominant teams in Munich and Manchester.

Of course, we must not forget the four meetings between Pep Guardiola and Maurizio Sarri from last season, as well as the two games between the coaches in the 2017/18 season. Sarri will face Pep Guardiola’s Manchester City with the third different team in as many seasons. The record currently stands at an overwhelming 5-1 for the Catalan coach.

These two possession obsessed teams have lost two games each since the restart. However, Juventus’s 4-2 loss against AC Milan, and the 2-2 draw with Atalanta, exposed multiple defensive issues.

Manchester City are playing extravagant football, and they should prove too much against the Italian Champions. City could run out comfortable winners.

Football is an intriguing sport which throws up so many twists and turns. Underdogs often beat big sides, and occasionally, we see a team have a really bad day at the office.

The new Champions League format, hosted in Lisbon, makes this the most intriguing showdown between Europe’s elite, for a long, long time.