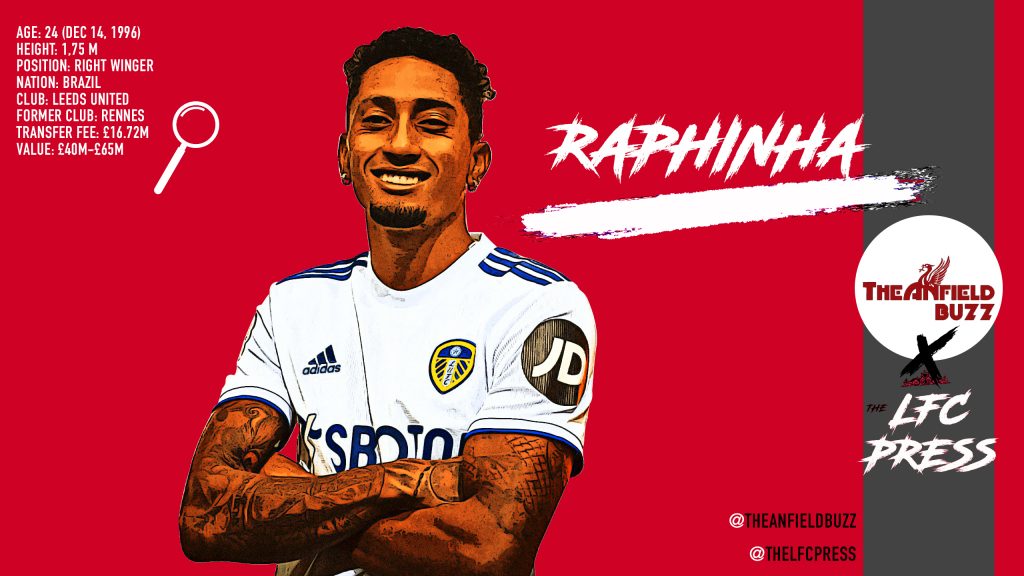 A club won’t always reap the rewards of a new signing. The hefty price tag not always a guarantee that the once packed terraces will oversee a world-beater in club colours. For Marcelo Bielsa and a fraction of football supporters in Yorkshire, however, that is precisely what happened.

With Raphinha, Elland Road’s increasing South American contingent has another figure capable of cementing Leeds United’s Premier League stay for the foreseeable future. The tricky winger, hailing from Porto Alegre in the south of Brazil, once again finds himself in a football-mad city, albeit much colder.

Leeds, via Guimarães, Lisbon and Rennes; the trodden path through Europe for Raphinha. A seismic rise to the Premier League on the face of it, but one which was telegraphed by his output and performances beforehand.

Boasting an identical return in both goals and assists with six in Leeds’ return to the top flight, Raphinha offers lethality & creativity in equal measure for Bielsa’s side. There is a case to be made that if Raphinha’s teammates had been more clinical in front of goal, the winger would be sitting pretty on double figures in the league’s assists rankings.

A strong dribbler with a penchant to drift past opponents and act decisively in attacking areas, Raphinha has the tools to unlock the most robust of defensive lines. The Leeds man ranks 9th in the Premier League for shot-creating actions (98), a total already four more than his Ligue 1 tally last season.

Raphinha’s directness and want to bear down on goal or at the heart of the opposition’s defence provides a real threat in the final third. Proving impactful from either wing (appearances: left:71 & right:78) in his career, this threat can be deployed dependent on oppositional personnel or tactics – an edge and versatility frightfully handy at the top level.

We often see players who boast that direct burst of pace to beat an opponent coupled with an end product not befitting the qualities which got them into that dangerous situation. Not here, not with Raphinha.

Equipped with the ability to use both feet and deliver into dangerous areas, the Brazilian has a skill set that commands immediate attention from full-backs or wingers overseeing defensive duties. This attention will often create space for teammates and also present Raphinha the stage to tease defenders into a challenge before sauntering past towards the box.

As with many elite footballing talents from that part of the world, trickery is woven into his armoury and comes as second nature when assessing how one should beat a press or evade a complex situation.

Attracting interest from the Premier League was no shock to those who witnessed Raphinha’s quality every weekend in France. The only surprise is that the Stade Rennais man failed to receive offers from a side either competing in Europe or fighting for honours domestically.

As the club’s record signing, there was an expectancy placed on Raphinha. The wide-man duly delivered, playing an integral role and spearheading Stade Rennais’ surge towards Champions League qualification.

Here on ZICOBALL, in the U23′ Breakthrough team of the 19/20 Season, Raphinha was picked by @GenZScouts as one to watch:

“Overall, his profile as a right midfielder who is a great chance creator, but one who can provide verticality, ball carrying, and penetration into the opponent’s area, will make him a future target for many top teams.

Perhaps his five goals and three assists have not been spectacular enough for people to take notice, yet his overall profile and underlying numbers are really impressive. We believe he has had an excellent first season in a top 5 league.”

There’s a series of questions that will prompt a broad range of responses from the Liverpool fanbase. Who can come in and dislodge one of the front three? Do we need a backup option to Sadio Mané, or does his form this season warrant a replacement? Should a striker be this summer’s focus? Would you cash in on Mohammed Salah if £200m was on the table? Is Diogo Jota a starter now?

It’s a conundrum Klopp will have thought through a thousand times. How and when should he dismantle a front three who have been so successful and clinical in recent seasons.

The subsequent dip in form and lack of cutting edge in the final third from Mané and Roberto Firmino is a worry. Compared to their title-winning season in 19/20, Liverpool are creating nearly double the number of chances in the Premier League (386 shots at goal in 19/20 & 671 in 20/21). Still, the conversion rates have dropped significantly from 22% in 19/20 to 8.2% this campaign.

The statistics suggest the Reds have been wasteful in performances this season, and the lowly league position confirms it. If a player like Raphinha becomes available to Jürgen Klopp, he must seize the opportunity with both hands.

Leeds’ star man won’t come cheap, but his qualities and ease of playing on both flanks stand him head and shoulders above other options linked to an Anfield switch in recent months. The potential transfer fee will edge over the £50m mark as his talent is undeniable, and Leeds aren’t in a position where they have to sell. However, every player has his price, shown by the £17m it took to convince Stade Rennais to sell last season.