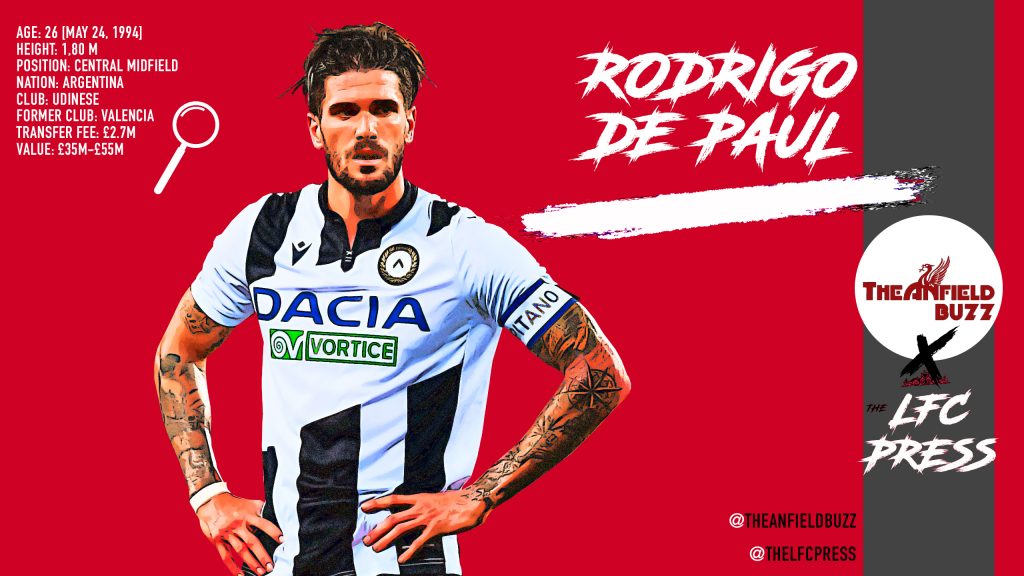 Udine’s Stadio Friuli has acted the stage for a wealth of talent in days gone by. During that time, the occupants have largely gripped onto mid-table obscurity.

Although currently not competing for domestic honours alongside clubs in the Lombardy region or the capital, there is a player amongst them whose talent radiates far afield from their base in Northeastern Italy.

The number ten from Udinese’s current crop was not quite forged in the city as its famous free-flowing export, Birra Moretti once was over a century ago. Instead, Rodrigo De Paul’s beginnings are traced back to Sarandí, a city in the Avellaneda Partido of Greater Buenos Aires.

De Paul navigated childhood with a ball glued to his feet, as you’d expect from most youngsters in Argentina. Juan Sebastián Verón, a young Lionel Messi, and Pablo Aimar were three superstars likely involved in De Paul’s wildest dreams where he would don the sky blue and white stripes of the national side.

Talent, determination, and a bit of luck, a concoction often prevalent when announcing one’s self as a professional footballer, would decide that such dreams weren’t so wild, after all. In fact, De Paul’s career to date would share similarities to the three above, alongside sharing a dressing room with the most decorated and adored of the aforementioned trio.

The first step on the footballing ladder was an impressive one, with local side, Racing Club. La Academia, who can boast 18 Primera División titles, had the pleasure of seeing De Paul turn out on 70 occasions for his boyhood side. Here, the Buenos Aires native lit the imagination of the hierarchy of Valencia Club de Fútbol in Spain.

Situated over 600 miles away were scouts and the powers that be, hopeful they had unearthed something similar to a previous gem from Argentina’s top-flight – River Plate’s Pablo Aimar.

With the weight of a club-record fee heavy around his shoulders, Aimar waltzed into the Mestalla amidst a sea of expectation.

Thirteen years later, De Paul made the same voyage, but for a snip of the €24m tag attached to his compatriot. The difference between the two in Valencia colours was that De Paul failed to hit the ground running.

In foreign lands and at 20-years-old, a quick transition into a new culture and an alien footballing setup is far from guaranteed. Put simply, De Paul struggled to impose himself on Nuno Espirito Santo’s team.

De Paul introduced himself to the locals in the worst possible fashion – a red card brandished for an elbow 63 seconds into his debut. Consequently, a four-game ban followed to add insult to injury, with his time in Valencia poised to mirror a similar trajectory.

An initial five-year contract, a Gary Neville orchestrated loan back to Racing Club, a wealth of competing talent around him, and a case of flattering to deceive, on the whole, sums up De Paul’s stint in Spain in one long sentence.

Subsequently, and after two goals and four assists in 44 appearances, this sequence of events eased the door ajar for Udinese. The Italians took advantage. Udinese viewed it as an attractive proposition, one they were willing to take a ‘gamble’ on.

Like Juan Sebastian Verón, De Paul’s next step was Serie A. At a club steeped in history and tradition, The former Racing Club man had the opportunity to grow in a side without a litter of world-beaters.

With the luxury of hindsight, it was the perfect move for him. At the top level and competing with Italy’s best, De Paul has Improved year on year. Now Udinese’s brightest asset, the Italian outfit is reaping the rewards from a punt taken on a player performing below expectations.

Statistically, De Paul has evolved into a force to be reckoned with. Playing for one of the less desirable sides in Italy, Udinese’s creative outlet tops the Serie A rankings in a host of areas this campaign.

Showing his ability to grab his side by the scruff of the neck and drag Udinese upfield, De Paul ranks in the top percentile in Serie A for both progressive carries and carries into the final third. This edge to his game has become key for Udinese as they deal with withstanding pressure through De Paul, who has a knack for transforming a passage of play into one with attacking intent with runs from deep.

De Paul doesn’t stop there. Once arriving in an area deemed dangerous by opposing sides, the Argentine has the quality to make it count. A forwards dream. De Paul has laid on seven assists (3 less than league leader – Juventus’ Juan Cuadrado on 10), a significant contribution towards Udinese’s 38 league goals.

Of course, assists aren’t always the most accurate metric to survey one’s creativity in attack as there’s a heavy reliance on a teammate to finish the move. So, looking In terms of big chances created in Udine, De Paul boasts 20 – the most in Italy’s top flight.

De Paul is elusive and hard to contain. His want to find positions to aid penetrative balls into the forward line will continue to ask questions of opposing teams and has done so this season with a league-high of 83 passes into the penalty area.

As is now expected in Udine, Rodrigo De Paul grandiosely outperforms his colleagues not only on the eye but also when delving into his statistical output. Avoiding the metrics previously mentioned, Rodrigo De Paul leads his Udinese team in:

Taking a look at De Paul’s output overall in Serie A, it’s interesting to see that the creative lynchpin, with his team 11th in the table, is ranked at 7.60 on SofaScore this season. De Paul’s rating makes him the highest-ranked player in the Serie A. Zlatan Ibrahimovic on 7.55 and Lorenzo Insigne on 7.45 come in as a close second and third.

IS Rodrigo De Paul The right fit at Anfield?

Yes. Although not a like-for-like replacement with the outgoing tenaciousness and the ‘hard yards’ Gini Wijnaldum offers, Klopp is crying out for a midfield creator.

Liverpool haven’t had that from midfield since Phillipe Coutinho. Naby Keïta was supposed to fit that mould, but that hasn’t come to fruition since his move from the Bundesliga.

De Paul provides a skillset to unlock and probe the sternest defences. As he is endowed with an aptitude to find an attacker in scoring opportunities, his output would soar if he found himself surrounded by Sadio Mané, Mohammed Salah, and Roberto Firmino, to name just three.

So many times this season have Liverpool looked devoid of ideas in attack against a low block, crying out for a bit of magic and intuition behind the forward line. Liverpool’s front three haven’t been on their game as a collective in comparison to the title-winning season. Still, the need for more creativity behind from a goalscoring central midfielder would be welcomed.

Liverpool’s midfielders have managed four goals from midfield in the 2020/21 Premier League season. Wijnaldum (2) and Henderson and Curtis Jones with one each make up the lowly figure. Liverpool’s total is 27 less than Manchester City on 31, assuming Phil Foden is a midfielder (Gundogan 12, Foden 7, De Bruyne 5 etc.)

Only Fulham (3), Sheffield United (3), and Arsenal (2) have recorded less. That’s simply not good enough, and it’s a goalscoring burden that has to be shared.

Talking to Bein Sport, De Paul subtly suggested where his next destination could be;

“I have always said that the best leagues are Serie A, the Premier League and La Liga…

I had the experience of playing in two. I am missing the Premier League.”

Wherever Rodrigo De Paul ends up, expect him to instantly evolve into a favourite of both the attackers at the club and the loyal supporters who will belt out his name once normality resumes in the concourses.