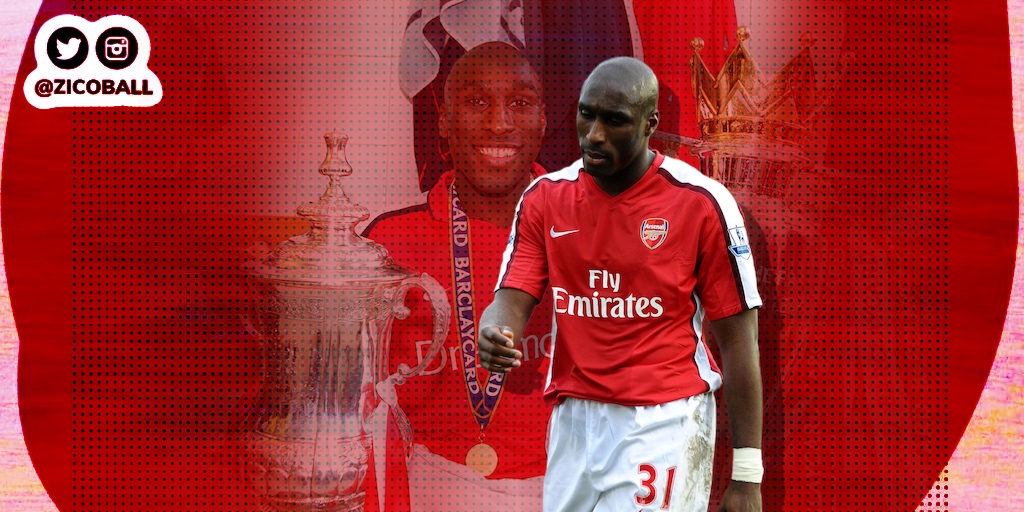 A tweet was sent out the other day proclaiming that Sol Campbell was vastly underrated, and that opinion was well received. The tweet centred around where I ranked him in the Premier League pantheon for centre-backs. Where I place him, we will get into later, but first, let’s address as to why the English colossus is so unfairly judged in terms of the best central defenders ever.

The initial suspicion could be because he rarely performed to the same level for his country. Maybe he was one of the reasons for England not winning an international tournament. Perhaps he was never that good in England white? Was it?

Campbell, as many of you will remember from England’s Euro 2004 campaign, was an England regular, featuring a significant amount from 1996 to 2006, and was the starting England centre-back along with various partners from 1998 to 2005. His stint in command was halted due to injury, allowing Rio Ferdinand to take over alongside John Terry.

Campbell, as you would guess, was dominant. Monstrous displays against the best players on the planet at tournaments along with his knack for popping up in goalscoring positions, meant he was an incredibly important player for the Three Lions.

He was also so impressive that he was named in teams of the tournament, something only ever done twice before him, and it was only the second time in the World Cup an England defender was given such recognition.

So this begs the question, why is Campbell not spoken about in the same breath as Terry or Ferdinand for England? It’s a strange one. Campbell reached levels unheard of for an Englishman for over 40 years. Campbell deserves to be spoken in the same conversation as these two, if not higher, as it is highly arguable, he had a better career for the national team.

Campbell was within 10 caps (73) of both Terry (78) and Ferdinand (81) for England, and only featured in one tournament where England didn’t reach the quarter-final as a minimum. Terry and Ferdinand both played in two.

He would consistently shines as the best defender on the field in England games. In 2002, when Ferdinand was on the verge of a world-record transfer for a defender, Campbell went about his business, putting in superior performances to the United-bound man. In 2004, when Terry was just a season off of his best-ever campaign, Campbell saved Terry’s backside on more than one occasion. He proved himself to be the most valuable defender in the side.

It’s hard to fathom why a player so great is given such a hard time, and disrespected as much. It’s unfortunate, and must be a hard pill to swallow for the colossal defender.

So, to address the question at the start, no. It is not because Campbell was poor for England that he doesn’t get the respect he deserves. In my opinion, he is the best defender to have played for England in a long time, and yet, he is never put on that pedestal with Terry or Ferdinand; very interesting.

Campbell was a Tottenham player for nine years and ran out as captain. From 1995 onwards, he steadily improved and improved, having more and more influence on the Lily-Whites and their performances.

However, despite the form of their captain, Spurs still couldn’t rise in the table. They did, however, win the league cup in 1999, with Campbell becoming the first black captain to lift a trophy at Wembley Stadium. He was also named in the PFA Team of the year, establishing himself as one of the elite centre-backs in the country. Spurs were still 11th, and Sol yearned for a taste of trophies.

The following season, Tottenham finished 10th. Still mid-table, and only reaching the fourth round was the furthest they would go in the cup competitions, showing more stagnation as a club. It was similar the year after, finishing 12th, with no real push for a trophy, and Sol was left disappointed as can be.

He was sick at competing for nothing year on year with his club, while competing for the number 1 spot of best defender in the country alongside Jaap Stam. It was a similar situation to Liverpool’s Virgil Van Dijk, stuck in an average mid-table team who would make the odd cup run, and yet was one of the best defenders around.

The difference between Virgil and Sol’s situations, however, was that there was a chance at trophies just a short distance away.

Maybe this is the reason. Maybe it’s not. I don’t think the big man cares too much. The decision yielded much-coveted medals and silverware, but also left a stain on his Tottenham career.

It was the summer of 2001, and he was a free agent. After months of the public believing he would stay at Tottenham, and several contract offers (offering to make him the highest-paid Spurs player ever), Campbell announced he would be leaving Tottenham on a free transfer.

This shock soon turned into horror one afternoon. Arsene Wenger was scheduled to unveil Richard Wright, a back-up keeper for his impressive side. Instead of Richard Wright, out walked none other than Sulzeer Jeremiah Campbell. The move was even stranger in the sense that no news or rumours were made by the press, making it a seismic shock that they had acquired the services of the giant defensive stalwart.

The idea behind the move was, of course, the desire to win trophies. Joining the spine of David Seaman, Martin Keown, Patrick Vieria, and Thierry Henry, it was clear that Arsenal were ready to compete for silverware. Wenger was chuffed, the was squad happy, and Campbell was ready to win.

The supporters who were not happy, as you would expect, were those of a Tottenham persuasion. He was quickly labelled ‘Judas’ among the Spurs faithful, somewhat clouding their recollection of just how good he was, perhaps. He played well in the circumstances surrounding his return to White Hart Lane. However, he was not pleased to see his brother in the home end with fans who were hurling abuse at him, the same supporters who adored him not long ago. It wasn’t the happiest of homecomings, and it pencilled in an awkward exchange at the next family meal.

Trophies soon followed. Being the rock-solid player and leader he was, he brought a completely different solidity and composure at the back, leading to fewer goals conceded by The Gunners.

This added solidity also dragged Arsenal to two trophies in the season he joined, after a trophyless season the year before. Campbell was at the heart of this. The Premier League and FA Cup had returned to the Emirates.

The 2002/03 season brought more of the same. Campbell displayed the same defensive rigidity and helped bring more success to Arsenal with yet another FA Cup. Campbell also gained individual success, receiving a PFA team of the year nod, showing just how dominant he was.

The season after, the 2003/04 season, welcomed Campbell’s crowning moment at Arsenal; The Invincibles. 38 games played, 26 won, 12 drawn, and 0 lost. This was the first season a team avoided losing since Preston North End’s 1888/89 season, where they were unbeaten in 27 league games.

However, it was not purely down to the amazing form of Arsenal’s front players, well, Thierry Henry specifically. It was largely down to the rock-solid defensive brilliance of Sol Campbell and company. Henry was, of course, spellbinding. 30 goals and 9 assists gave him a goal/assist influence level of 53%.

Yet, with just 73 goals scored all season, it was clear that Arsenal relied on their backline, and Sol Campbell, in particular, was key to conceding only 26 goals all season; utterly ridiculous. At the time, this was a record for a league victor, and the first for a winner to concede under 30 goals. Defensive dominance and individual brilliance up front led to the Invincible title.

Another PFA team of the year nod would arrive, highlighting how Campbell was truly recognised as one of the best around. It was followed by a marvellous Euros campaign, where Campbell was firmly in the conversation for the best defender in the world.

This would mark the end of his peak, however, as he would be blighted by injuries, public complaints, and a loss of form. It got so bad for Campbell that he felt he needed to fly away in February 2006 to ‘reflect on life’ in his final season.

Nonetheless, he still picked up another FA Cup medal and scored in a losing effort in the Champions League final. Alas, the monster had been wounded, and was on his way out from Arsenal, left to wind down his career elsewhere.

Campbell, in his pomp, was a real demon of a centre half. He had absolutely everything; controlled aggression, superb reading of the game, strong in the tackle, dynamic in the air, a leader of men with massive winners intangibles, elite ball-playing ability, all world strength, and top-level pace.

He was impossible to get past – Wenger had dubbed him ‘indestructible’ when asked why he signed him. Just go back and watch the 2004 Euro quarter-final between England and Portugal; the dominance on show from the big man was undeniable. Had it not been for him, it would have been a true rout.

He could even play both roles at centre-back. Whether it was a sweeping role, mopping up any errors from his partner, or the more aggressive, assertive centre-back. However, all the while, he would be a true leader. For me, he was undoubtedly the most dominant and complete centre-back England ever produced.

Why then, is he treated with such disrespect, and not mentioned in the same breath as players like Van Dijk, Ferdinand, Terry, and Nemanja Vidic? It doesn’t make sense. If the argument is for peak defensive ability, then Campbell is on that level, and in some cases, above it. If the case is for longevity at the highest level, then there is one player in particular who doesn’t belong in that list.

In terms of the aforementioned players, all commonly brought up in the best ever debates. I view them in this order: Virgil Van Dijk, Rio Ferdinand, John Terry, Nemanja Vidic. That is from best to worst. Were I to slot Campbell in here, I would have him number two, behind Virgil.

Campbell was essentially Van Dijk, before Van Dijk. Elite in all areas of defending, and a superior ball-player for his time. Van Dijk is just better in every aspect, excluding the aggression, which doesn’t actually inhibit his ability to defend, it just means he’s so good he doesn’t need to. Van Dijk is an improvement on Campbell in my view, considerably. Same profile, only vastly improved.

Now, why do I have Van Dijk above Rio? Sol Campbell, in his peak, was as complete as you get. All the attributes mentioned above, Ferdinand has, except at times he could get dominated physically by more robust centre forwards, even outpaced by some, though the former was much more common. Add to the fact he was not as aerially dominant as Campbell; I don’t believe he’s worthy of going above the big man. Although it wasn’t leading to Rio being bullied continuously like John Stones (he was still an immensely talented defender), it was still a problem at times, which, in his prime, Campbell never had to deal with.

I implore you, don’t let his period post-peak cloud your view of Sol Campbell, because for a period of around five or six years, he indeed was the best defender in the country, and one of the very best in the world, and that fact is indisputable to someone who watched and admired the big man for years in North London.

The monster, everybody. Sol Campbell.