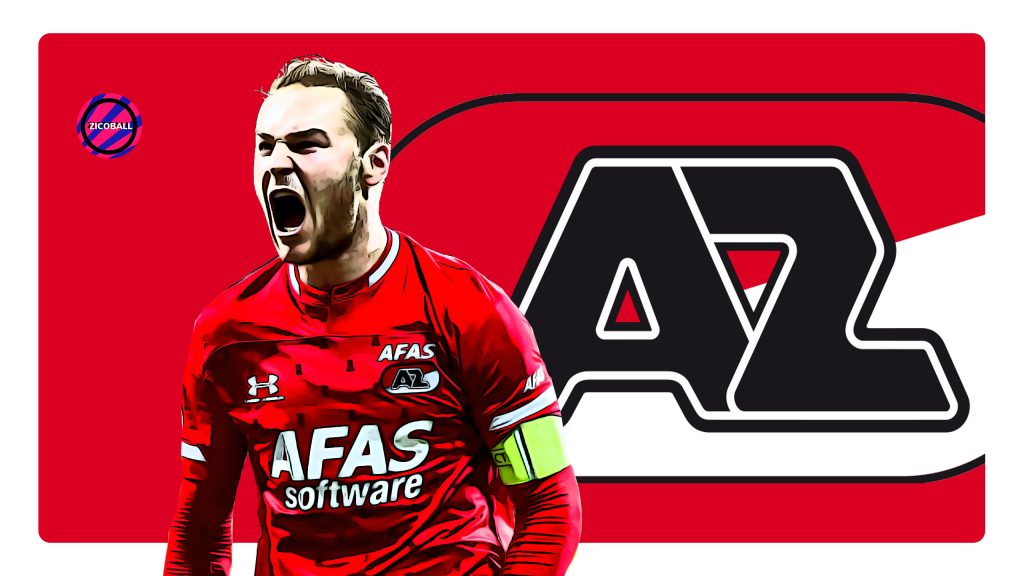 AZ Alkmaar were having a fantastic season in the Eredivisie before the league season was, unfortunately for AZ, cancelled amidst a global pandemic. Arne Slot’s exciting AZ side sat level on points with Ajax at the top of the table, before the cancellation of the league season in Holland. AZ Alkmaar’s Myron Boadu and Calvin Stengs’ performances have grabbed all of the attention this season. However, in this article, we would like to shed light to arguably their most important player: Teun Koopmeiners.

Koopmeiners has made the joint-most appearances for AZ this season, alongside Oussama Idrissi on 25. He has been a vital element to AZ’s success in league competition.

Koopmeiners was born in Castricrum, Netherlands, on the 28th February 1998. He joined his local side, Vitesse ‘22 at a very young age. In 2009 at the age of 11, he joined AZ Alkmaar’s youth setup.

He was handed his professional debut for AZ on 18th August 2017 where he came on as a substitute for ex-AZ winger, Alireza Jahanbaksh of Brighton.

Koopmeiners has so far made 83 appearances for the AZ first team and has played for nearly every age group at national level. Koopmeiners is yet to earn a cap for the Dutch national team.

AZ Alkmaar usually deploy a 4-3-3 or a 4-2-3-1, with Koopmeiners as the deepest distributor in Arne Slot’s side. Koopmeiners has also covered in at centre-back this season.

AZ usually like to invite pressure from the opposition and play out using mini triangles, or put balls over the top to exploit the speed of star attacker, Myron Boadu.

Koopmeiners is an essential factor in how AZ functions. He’s currently completing 5.8 long balls per 90, with a 53% long ball accuracy. His distribution is second to none in the Eredivisie. He’s usually responsible for helping AZ break through the opposition press and utilising his passing to help AZ transition from defence to an attacking phase.

Koopmeiners either drops in either side of the centre-backs, in between them, or just in front of the defensive pairing. This is a feature of his play which helps AZ move through the lines. He tries to make himself available as a passing option in possession/playing as an auxiliary centre-back.

Teun Koopmeiners is incredible at playing a pass through the lines. He has a unique passing range. He!usually drops incredibly deep to get the ball into dangerous areas using his impressive passing ability, as is on display in these two pictures;

Koopmeiners is a very intelligent player who can spot a pass from a mile away. He’s a very imaginative player and knows how to progress his team up the pitch using a variety of passes. His passing ability is a unique aspect of his game.

Koopmeiners is a very clean and confident player on the ball. He’s completing 1.2 dribbles per 90 at an 83% success rate this season. He’s a very mobile player and often picks the right situations to dribble.

Koopmeiners has 11 league goals this season, But none of them are from open play. He’s a penalty expert and steps up to the spot with confidence. Koopmeiners has scored 20 out of 21 career penalties. He knows how to take a spot-kick.

Koopmeiners is also fantastic from dead-ball deliveries. He creates 1.1 chances per 90, mostly being from set-piece deliveries.

How does Teun Koopmeiners compare from this season to last season?

Using data provided to us by Statsbomb, we can see that Koopmeiners has taken a massive leap in his development at AZ Alkmaar.

His xGbuildup is at 0.90, which is higher than ever. It shows how engaged and important he is to the AZ buildup play.

Koopmeiners has impressed in Europe as well. He was especially impressive against Manchester United at home with his numbers looking like this:

Koopmeiners is a player on the rise.

Koopmeiners would make a great Alternative to Swiss-International Granit Xhaka. He’s a willing pressing player from deep like Xhaka, and he can cover centre-back. He certainly ticks a lot of boxes for the North London outfit.

Mikel Arteta has deployed a variety of formations. He has had significant success for Arsenal with the 4-2-3-1 (first picture), which turns into a 3-4-3 (second picture) in possession, with Xhaka as the third centre-half.

Koopmeiners would make a perfect fit in this system and is a much more capable defender than Swiss-International, Xhaka. Koopmeiners also has experience playing as a central defender and would eventually be a fantastic replacement for Xhaka. His distribution from deep is superior to anybody’s from the Arsenal backline.

Spurs have had a lack of consistency and balance in their midfield ever since the arrival of Jose Mourinho. With the Portuguese manager not the biggest fan of club-record signing, Tanguy Ndombele. As Toby Alderweirald is advancing in years, Spurs will need a premium distributor from the base of midfield to add balance, and who covers a sizeable amount of ground. Koopmeiners gives spurs a lot of options and flexibility.

Koopmeiners would make a good fit for Spurs; an able distributor from the base of midfield and centre-back, Koopmeiners is a fantastic option for the North London outfit, and would be a significant upgrade on Eric Dier.

Spurs have previously had success in signing players from the Eredivisie. Steven Bergwijn has hit the ground running, as well as Christian Eriksen, Davinson Sanchez and Jan Vertonghen.

To conclude, Teun Koopmeiners is a fantastic young player who is only going to get better with game time. He has already shown great experience and leadership at the age of 22. With the right club and coaching, he could truly become a special player in the future domestically and on the international stage. Teun Koopmeiners is someone who deserves your attention!