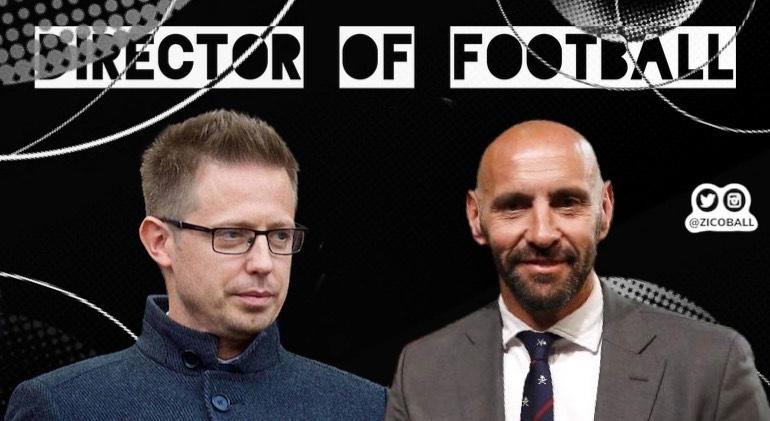 As the world and society grow and adapt to the modern world, football proves to be no different. Technological adaptions such as goal-line technology and VAR, and new positional roles such as false nines and trequartistas are proof of such change. Football is forever evolving and intertwining into the modern world, and this has naturally created a plethora of new job roles off the pitch.

One such role is Director of Football; a position described as a measure taken to protect clubs from the growing financial risk associated with a sporting decision, ensuring a club’s future safety.

In this feature article, we’ll be looking at what is exactly meant by this, while using real-life examples of how they have mustered up change in the modern game. The role has seemingly been shoehorned into the sport due to the short life-span that managers face, and the increased know-how needed in navigating the transfer market.

There was a time where a manager dealt with football, an executive who dealt with the finances, and both who would cast an eye over recruitment, but not anymore.

Due to the growth of football, the sport needed a new and dynamic role. The Director of Football role demands someone who is business savvy just as much as they are football savvy. The perfect candidate is someone who can lead a team of people, and who is smart enough to find their way through the world of corporate football.

The idea that this role revolves purely around the recruitment side of the game is often inaccurate. Recruitment is essential, but it goes beyond merely buying players. A DoF is there to ensure a club’s goals and visions are upheld in search for success on the pitch, which is spearheaded by the first team manager.

A leading example can be found with Borussia Dortmund’s DoF, Michael Zorc, who has previously stated that Dortmund’s aim was to please their fans by playing attacking football. As this is the German outfit’s central philosophy, not only is it young and exciting players who are signed, but recruitment is fine-tuned to any potential incoming manager.

Since Jurgen Klopp left in 2015, Dortmund have had four managers, all of whom play a similar style which suits the club’s philosophy. A structure like Dortmund’s allows there to be little reason for the squad to undergo an overhaul, as they have the playing staff to suit the style of manager, and vice versa.

Zorc ensures that not only are the right players signed for the club, but that the tactics and style of play are engrained in Dortmund’s youth teams. Zorc’s input helps the youth players develop and mould into Dortmund’s footballing style, and consequently encourage them to break into the first team.

Zorc has an impressive list of purchased talent to his name while operating in Dortmund. £11m was enough for Saint-Etienne to part ways with Pierre-Emerick Aubameyang, Ousmane Dembele was bought for £13m from Rennes, Robert Lewandowski cost only £4m from Lech Poznan, and former Manchester United man, Shinji Kagawa, was plucked from Cerezo Osaka for £300k. Impressive.

The former Barcelona and current Manchester City DoF is arguably the most famous face in the role. Txiki Begiristain believes you don’t need to sign 11 new players, just one or two. If you are a team that is achieving your targets, he says the idea is to sign players to help compete for places in the squad. If you are losing and unable to reach proposed goals, you must sign players where you’re weakest. Simple then, in theory.

Before becoming a DoF, he played for Barcelona as a forward. The experience of playing for the Catalonian club helped him to create two great Barcelona squads. He also shares a great working relationship with Guardiola, who speaks very highly of him; “I think Txiki is the most important person in my career as a manager” said Guardiola in an interview on City’s official website.

The LOSC Lille director is hot property right now. Chelsea, Manchester United, and Barcelona have all shown interest. Campos was very popular in France during his stint at Monaco and laid the foundations for their sensational league win.

Before becoming a DoF, Campos was a manager in Portugal. His teams were known for playing an exciting brand of football, with his Gil Vincente side managed to beat Mourinho’s Porto.

Campos was also known for relegation in Portugal, receiving his nickname “Luis Campa”; Campa meaning ‘grave’ in Portuguese. After a sabbatical from the sport, he would later return to the beautiful game as a fixture of Mourinho’s backroom staff in Madrid.

His first recommendation was a right-back from Rio Ave called Fabinho, who would later team up with Campos at Monaco, as a £50m rated midfielder. While at Monaco, Campos’ ability to buy players cheap and foresee their potential created nearly £1Billion in transfer income. You can see why his services are so coveted.

Known better by his nickname ‘Monchi’, the former Sevilla Goalkeeper has been a massive part of Sevilla’s recent success.

Following retirement, he took up his role as a DoF where his task was simple. He was to help set up the club’s youth system and ensure they didn’t drop down to the second division straight after being promoted.

Instead, he built a solid foundation for the Segundas, adding over 700 scouts to their network and generating £200m profit in transfers. During his tenure, the club won 11 trophies, including the Europa League in three successive years. He would later leave Seville to try his hand in the Serie A with Roma, and help build from within the youth setup, nurturing both Justin Kluivert and Cengiz Under.

In 2019, he returned to his beloved Sevilla. Jose Castro, Sevilla’s president, stated Monchi’s role was more prominent than before, signalling his worth to the Spaniards. Monchi’s most significant signings in Spain include Sergio Ramos, Dani Alves, Adriano, Ivan Rakitic, to name only a few.

The Toffees appointed Marcel Brands with the hope he could help the club move forward. The Dutchman is another example that this role is much more than just signing players. After his playing career finished, Brands’ first job was Technical Director for RKC Waalwijk, where he appointed Martin Jol as manager.

Brands later moved to AZ Alkmaar with Louis Van Gaal, where the club won only their second-ever Eredivisie title. The success helped Brands land a job at PSV Eindhoven, who tasked him to improve the youth system and their transfer activity.

Brands spent eight very successful years at PSV before being poached by Everton.

The Former PSV man is rated very highly by Everton officials, so much so that he was moved onto Everton board after six months. In his role, he was instructed to improve their youth system, transfer activity, scouting, and help with their project of creating an attractive brand.

Farhad Moshiri and Bill Kenwright have both expressed their ambition to move Everton into a position to challenge the best, and both have proclaimed that they believe Brands is the right man for the job.

Liverpool’s DoF has had a big say in their recent Premier League and Champions League success.

Starting his career as a sports analyst at Portsmouth and Tottenham, he then joined Liverpool, and was promoted to DoF. A strong ability Edwards has in his arsenal is the ability to sniff out a bargain. Andy Robertson and Gini Wijnaldum were signed for a combined £33m from relegated sides. Edwards also engineered the transfers of Mohammed Salah and Sadio Mane, who were both impressive players, but neither had reached their full potential before the Anfield switch.

Liverpool owners, Fenway Sports Group, deem Edwards as a highly valuable asset to the club. His Moneyball and statistics-based approach is something FSG have applied to The Boston Red Sox, their other successful sports franchise.

Moneyball is the use of data to find undervalued players who spring up impressive on-field statistics. A player’s reputation takes a backseat here as data analytics act as the catalyst behind transfer decisions.

Edwards’ Moneyball has left a legacy of success at Liverpool. Alongside a steady flow of silverware, the club is in a healthy financial position. When they choose to, they could sell the majority of players for a nice profit.

Edwards’ most prominent signings can all be seen lifting the Premier League trophy in the next month, with Sadio Mane, Roberto Firmino, Virgil Van Dijk and Alisson Becker amongst those bought under Edwards’ stewardship.

As the world of football continues to grow and attract further eye-watering investment, all roles within it become more geared towards business. Owners demand returns on investment in both the transfer market and exploits on the pitch. The DoF role is now hugely influential in modern football, and is as valuable as some of the roles in the dugout. Nevertheless, it’s certainly an approach that a lot of clubs will be incorporating into their business plans.