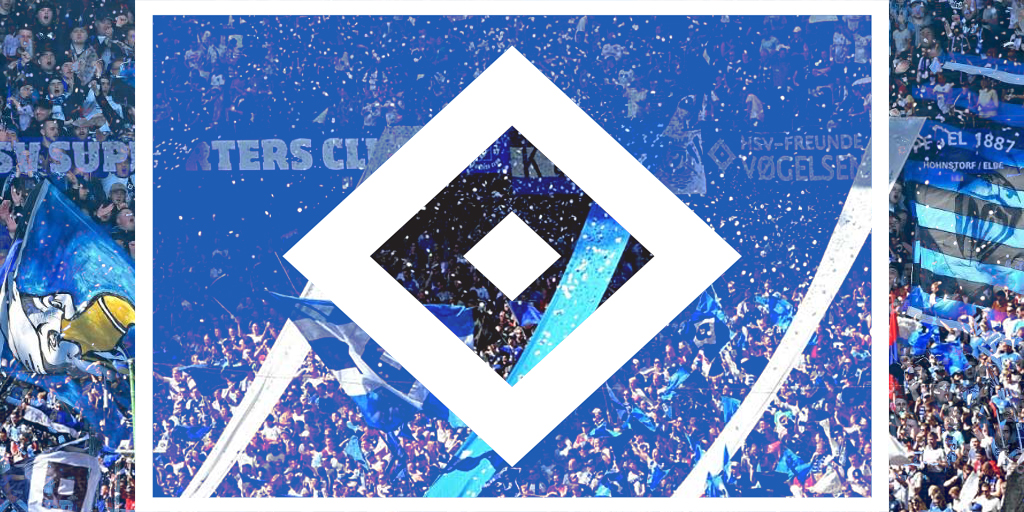 Fifty-four years, 261 days, 0 hours, 36 minutes, 11 seconds – the clock in the Volksparkstadion stood still following Hamburger SV’s final day relegation from the Bundesliga in 2017/18 bringing an end to their top-flight status.

The only Bundesliga club since the league’s inception to avoid relegation, as well as play continuously in the top tier of the German football league system since the club’s formation at the end of World War I.

The writing appeared to be on the wall for Hamburg who had flirted with relegation for four of the previous five seasons, relying on winning the relegation playoffs in 2013/14 and 2014/15. It wasn’t always doom and gloom for Die Rothosen (The Red Shorts) who are fifth on the all-time list of Bundesliga victors with six titles and eight runner-up spots.

The club was triumphant in other domestic leagues before the founding of the Bundesliga in 1963, but their most significant achievement came in the 1982/83 season when they won the European Cup.

It came during the club’s most successful period of the mid-1970s to the mid-1980s. So, the question begs, how did they fall away so dramatically in recent times?

If we look at their past, as well as their recent endeavours, we can gather an understanding of why the club is featuring in their third consecutive campaign in 2.Bundesliga.

Hamburger Sport-Verein (HSV) trace their origins to the merger of two clubs; Hohenfelder Sportclub and Wandsbek-Marienthaler Sportclub in 1887 became Sport-Club Germania Hamburg, often referred to as SC Germania. This was the first of three clubs that merged to form Hamburg in 1919, with HSV recognising the founding of SC Germania as its date of origin.

The other clubs involved in the merger were Hamburger FC, founded in 1888, and FC Falke Eppendorf, founded in 1906. The opportunity to merge reared its head as a result of all three clubs severely weakened due to the impact of the First World War on human resources and finance, meaning they could not continue as separate clubs.

Post Second World War proved challenging for all German clubs, including Hamburg, with national titles hard to come by. Despite their difficulties, in 1956, the Red Shorts did reach the DFB-Pokal final but were beaten by Karlsruher SC. The upset in the final was followed with losses at the business end of the national championship in 1957 and 1958 to Borussia Dortmund and Schalke 04 respectively.

The following season, as a result of being crowned German champions, Hamburg took part in the European Cup. It was their first-ever European competition, and after a valiant effort, they tasted defeat in the semi-finals by Spanish giants, FC Barcelona.

The crowd at the first leg of the semi-final fixture at the Volksparkstadion remains the record attendance for a Hamburger SV home match, with 77,600 making their way through the turnstiles.

Two years after their maiden European venture, HSV was invited to join the newly formed Bundesliga for its opening season in 1963 – along with 15 other clubs. Just before the start of that Bundesliga campaign, the club won its first DFB-Pokal following a 3-0 victory over Borussia Dortmund, and later the groundwork to the successes that would follow.

Hamburg’s great success would not arrive for another ten years. The start of the golden era began in 1973, when HSV won the first edition of the DFB-Ligapokal, beating Borussia Mönchengladbach 4-0 – a competition which oddly wasn’t founded until 1997, but was played as a unique event in the 1972/73 season due to the Munich Olympics causing a postponement to the regular season kick-off.

After another miserable DFB-Pokal defeat in 1974 to Eintracht Frankfurt, the Dinosaur again reached a DFB-Pokal final in 1976, beating 1. FC Kaiserslautern 2-0.

The next year saw the club achieve its first international success, beating Anderlecht 2-0 in the final of the 1976/77 European Cup Winners’ Cup. HSV also achieved their best Bundesliga finishes during this time, coming fourth in 1974/75 and then bettering that the next season in second.

After the club’s first European triumph, English superstar Kevin Keegan was added to the ranks from then English champions, Liverpool.

Although HSV weren’t as successful in Keegan’s first season in Germany as the club had hoped, it would turn out to be just the beginning of their period of dominance. Die Rothosen, in 1978, appointed Yugoslavian coach Branko Zebec who led them to their first-ever Bundesliga title in 1978/79, with Keegan topping the scoring charts and winning the Ballon d’Or for a second successive season. The campaign that followed saw the German outfit back in the European Cup after a 19-year absence, however this time, they went one step further.

Falling to a 2-0 defeat in the first leg of their semi-final with then-six-time winners Real Madrid, Hamburg would subsequently serve up payback in the next leg. Thrashing Los Blancos 5-1 at the Volksparkstadion was as impressive as it sounds today, and ultimately ensured their love affair with the European cup reached a climax.

For their first European Cup, HSV would return to Madrid to contest the final, coming up against reigning European Cup champions Nottingham Forest. The final would go Brian Clough’s way, with The Tricky Trees clinching a 1-0 win.

In the league, the club missed out on retaining the Meisterschale (Champions’ Bowl,) finishing two points behind champions Bayern Munich.

Midway through the 1980/81 season, Hamburg relieved Zebec of his duties and placed his assistant, Aleksandar Ristić, in charge for the remainder of the season. The deputy secured a creditable second-place finish in the Bundesliga.

But in 1981, Ernst Happel was appointed and would go on to become the most successful manager in the club’s history. In the Austrian’s first season, HSV regained the Bundesliga and reached the final of the UEFA Cup, though they went on to lose 4-0 on aggregate to Swedish outfit IFK Göteborg.

From January of that season to the following January in 1983, Hamburg were undefeated in the league – a record 36 games that remained a record until 2013. A third Bundesliga title followed at the end of 1982/83, defending the title on goal difference against local rivals Werder Bremen – this was not to be the highlight of the 1982/83 season, however.

A month before Hamburg regained the Meisterschale, they travelled to Athens to face Juventus in the European Cup final. The Old Lady were a formidable opponent, as you’d expect, but a goal from midfielder Felix Magath, who would later manage the club, was enough to seal Der Dino’s first-ever European Cup.

The next few years brought little joy, with HSV losing out on the Bundesliga title in 1983/84 to VfB Stuttgart on goal difference, before finishing fifth and seventh over the following two years. A return to some form of success did arrive in the 1986/87 season when Hamburg finished second in the Bundesliga and won a third DFB-Pokal, beating Stuttgart Kickers 3-1. Following the cup final, Ernst Happel left the club with two Bundesliga titles, one DFB-Pokal, and one European Cup.

The success of the mid-1970s to the mid-1980s would ultimately, bar a DFB-Ligapokal victory in 2003, be the end of Hamburg at the top table, and a steady decline would ensue over the next 30 years.

As early as the beginning of the 1990s, Hamburg were embroiled in financial difficulties. In 1991, Thomas Doll was sold to Lazio for a record fee of £16million and was credited with ensuring the survival of the club.

The off-field issues soon filtered down to the pitch, with HSV finishing in the bottom half of the league for four consecutive seasons between 1992 and 1996. The campaigns that followed provided better league finishes, the highlight being a third-place finish in 1999/2000.

The Red Shorts would record several impressive league finishes over the following ten years; fourth in 2002/03, third in 2005/06, fourth again in 2007/08 and fifth in 2008/09. The impressive league standings, however, covered up the off-field issues and the racking up of enormous debt, which to this day stands at a reported £133m.

To add insult to injury, many of the on-field issues started to unfold after the dismissal of manager Martin Jol in 2009. Since the Dutchman’s sacking, there have been 14 permanent managers in the 11 years. This revolving door ‘policy’ meant that the team struggled to settle to any particular style brought in by one of the many managers. Disappointment swamped the club, with the blame for Hamburg’s failures falling on the managers who weren’t given enough time. Along with accumulating massive debt and the ever-changing backroom staff, Der Dino in 2014 outsourced into a limited company – a process in German football known as ‘Ausgliederung’.

A promise was made to supporters that this would encourage levels of investment to help the club establish itself among Europe’s elite. Four years later, Hamburg saw relegation on the final day of the 2017/18 Bundesliga – the name ‘The Dinosaur’ becoming redundant, and the club are now starting a third consecutive season in the second tier.

After the club’s relegation, businessman Klaus-Michael Kühne who pumped millions into the explained, “Economically speaking, Hamburg is the worst investment decision of my life.” Kühne, who has a 20.6% stake in the Die Rothosen, has an influence that appears to grow alongside the ongoing worsening crisis. HSV have stagnated in a self-perpetuating cycle of financial reliance on the German businessman.

Other clubs in Germany have witnessed similar issues recently, including the likes of Kaiserslautern, who filed for insolvency over the summer, and also 1860 Munich. It is quite clear to see what can happen to fallen German ‘giants’ who find themselves trapped in a downward spiral of sporting failure, financial mismanagement, and unrealistic expectations – Schalke 04 could yet be next if they are not careful.

Hamburger Sport-Verein supporters have forgiven their club for much over the years, but they are growing ever impatient of current continuing circumstances.