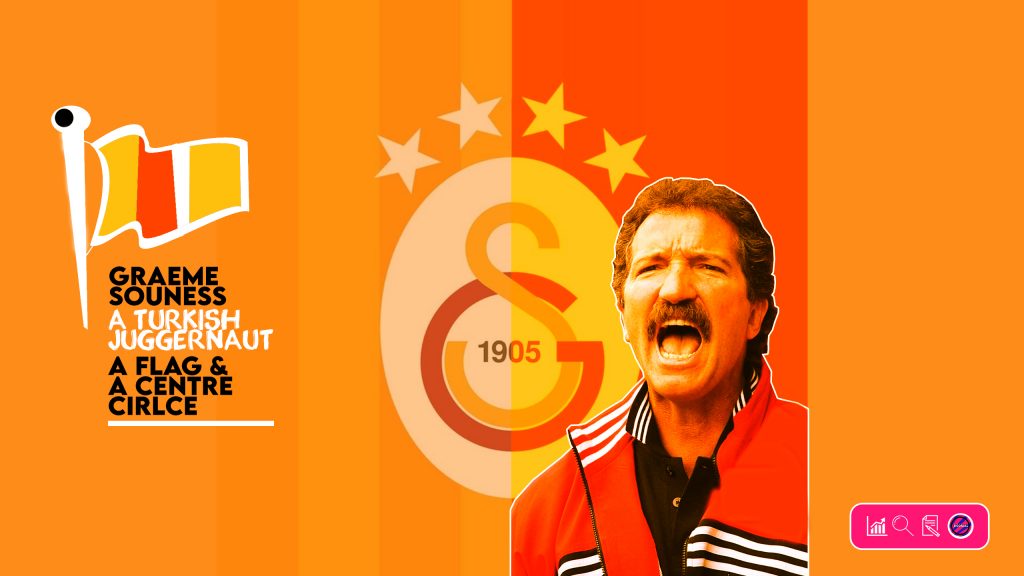 Graeme Souness wasn’t always confined to a Sky Sports studio. Although the colleagues he now rubs shoulders with may mirror careers in the same sport, it would prove a struggle to find one with an honours list as impressive.

Most famous in the United Kingdom for his showings at Middlesbrough, Rangers and Liverpool, Graeme Souness’ path in football took the course of a twenty-one-year playing career and a twenty-year stint in the dugouts of Europe.

The commanding midfield general boasts a CV that spanned the globe, including loans from Montreal to West Adelaide and a managerial reign with stops in Portugal and Turkey. The latter, one of his shortest appointments, duly earned him cult-hero status in the nation’s largest city.

A year on from Souness’ managerial exit from Liverpool, a club where he achieved his greatest successes, it’s time for a new challenge. Istanbul – the home of the Turkish super-club Galatasaray. A club showered in footballing riches and a stadium brimming with silverware and ravenous passion. It was a stage set to oversee the arrival of a Liverpool legend in the summer of 1995.

Galatasaray stands in good shape, having won the league two seasons earlier. However, the third-place finish behind Besiktas and Trabzonspor the season before was undoubtedly deemed a failure. Souness knew he would need to deliver trophies for the Istanbul-based club to consider his role successful.

With Hakan Sükür attracting interest from Serie A outfit Torino, Graeme Souness and the Galatasaray hierarchy’s task is to find a goal scorer to fill his want-away boots. Sükür was monstrous for Galatasaray since joining on a free transfer, and in three seasons, the goal-getter scored 68 goals in 133 appearances.

Back in England, Aston Villa is notified of a Turkish club activating a release clause for one of their most valuable assets. Souness plans to link up with a former player he managed on Merseyside. Dean Saunders amounted to 22 goals in 52 games during Souness’ debut season at Liverpool, and it was enough to leave a lasting impression.

The Welsh international, who also works as a pundit, spoke to TalkSPORT about the abnormal build-up to his move:

“Graeme said, ‘come and have a look,’ so I get the plane. He’s waiting at passport control and shakes my hand.

“Two supporters picked me up and carried me through the baggage haul where 5,000 Galatasaray fans are. They carry me out, put me in the car and 50 of them pick the car up and carry it 25 yards down the road in the Mercedes. I was in the car on my own; it was like the pope.

“Graeme says they are having a training session at the ground. Graeme says, come down and watch. I get there, and he says, “get some kit on.” I walk up the steps onto the pitch, and I was like, what is that noise? Forty thousand people in the stadium, and I’ve walked out in a Galatasaray training kit.

“The president chucks me a big Galatasaray flag, and I hadn’t even signed or negotiated my contract! I had to run around the stadium, waving my flag. It was easier to do it than refuse.

“I had to run around waving to fans, and when I got back, the president said, with a big cigar in his hand and his coat over his shoulders, ‘Dean, if you don’t sign now, there may be a problem…

Souness gets his man as Saunders joins Mike Marsh from Coventry and Barry Venison from Newcastle heading to Turkey. The former Liverpool man had just completed a season to remember for the midlands club, scoring 15 goals in 39 appearances in 94/95.

Meanwhile, in Turin, Sükür is hankering for a move back to the Süper Lig. Having played five games for Torino, the frontman struggled to settle into his new surroundings and secured an October return to Galatasaray. Saunders had impressed in Sükür’s absence with five goals in eight. However, the prospect of the pair performing in the same team was frightening.

Saunders and Sükür’s first chance to pair up together is in the ‘eternal derby’ against fierce crosstown rivals, Fenerbahçe. Saunders plays in an attacking midfield role, just behind the forward pairing of Sükür and Saffet Sancakli. Unfortunately, Galatasaray’s attacking trio is not enough to stop them from slumping to a 3-1 defeat. More bad news to follow for Galatasaray fans as Saunders picks up a knock and is sidelined for the next three months. A significant blow.

Turkish Delight In The Eternal Derby

22nd March 1996, Galatasaray welcomes Fenerbahçe to the other side of Istanbul. Fourth welcomes first as the eternal derby plays out its second fixture of the season. In the backdrop to the game, both sides clinch semi-final wins in the Türkiye Kupasi, with the two-legged final pencilled in for three weeks. Souness’ second eternal derby is to act as a must-win warm-up to the biggest day of the Turkish calendar.

The Bosphorus strait, a waterway that runs through Istanbul, forms the continental boundary between Europe and Asia. Situated on the European side of the Istanbul divide are the city’s commercial hub, more affluent areas and Galatasaray’s home.

In the east, densely populated residential areas and Fenerbahçe. The two teams and their fanbases are divided geographically and in terms of competing for honours on the pitch. The tug of war for the Süper Lig had resulted in Fenerbahçe amounting to 12 top-flight wins by 1995, two more than Galatasaray.

Two halves pass, and the much-anticipated clash ends 2-0 to the hosts. Sükür gets his goal as he often does, and Galatasaray triumphs in a feisty derby to make it honours even in meetings between the sides this season. The gaffer is overjoyed as he oversees his first derby triumph, adding three points to the table. Souness watched as his team followed up the victory by recording a 3-0 away win to Karsiyaka and a 3-0 home victory over Eskisehirspor. Galatasaray is poised to strike.

11th April 1996: Galatasaray’s home leg to Fenerbahçe in the final of the Türkiye Kupasi. A raucous atmosphere emanates from the sidelines as flares, banners, and ultras add to the nervousness sweeping across the stadium. However, five minutes into the game, those nerves transform into adulation for the majority in attendance. Dean Saunders’ dispatched penalty from the spot, a strike proving to be the winner on the day.

The return leg in Istanbul’s east, 13 days later, plays out to be a cagey affair in front of another decibel-raising sell-out crowd. An atmosphere to rival any footballing cauldron in the world. Fenerbahçe fed the frenzy of their fans with Aykut Kocaman breaking the deadlock in the 34th minute before heading into halftime at 1-1 on aggregate.

The second half would play out similarly to the first. The cagey nature continued as either side knew that any chance of silverware would be in serious jeopardy if they were to concede. Ayhan Yücebilgic blows the whistle to signify the end of 90 minutes as the genuine impending prospect of a penalty shoot-out to decide the fate of the cup grows nearer.

The prospect of penalties, however, was not on the agenda for Dean Saunders. A 116th-minute finish from the Premier League export proves fatal for their opposition. Four goals in his four cup outings this season ensure Souness wins the Türkiye Kupasi at the first time of asking. A stadium and city divided as one-half reels in sheer ecstasy. An inspired signing by a figure in the dugout adept at harnessing the best from his players.

The most iconic moment of the triumphant day is still yet to come as Souness and his match-winning side head towards the Galatasaray faithful to celebrate.

Celebrations soon turn sour in the eyes of the remaining opposition fans in the stadium. Fenerbahçe supporters watch as Souness, coaches and playing staff celebrate in front of the ‘travelling’ support.

A bitter pill to swallow transforms into a different beast as Souness appears from the celebrating Galatasaray ensemble. Leant on his shoulder was a large flag pole donning red and yellow. Colours of Galatasaray now moving from side to side as he built up into a jog. The chorus of boos and jeers rings louder as the Scotsman approaches the centre circle with steely determination.

The Galatasaray manager proceeds to stab the pole into the ground on the halfway line. It finds its place as intended and red and yellow stand tall in the middle of Fenerbahçe’s pitch. Realising he has flared tempers in the stadium, Graeme Souness plans a swift exit to the dressing room as emotions overflow from the stands. As you’d expect, the home supporters are incensed.

Graeme Souness recently lifted the lid on the moment, earning him legendary status amongst one half of Istanbul while speaking on Sky Sports’ Football Show alongside Gary Neville. The ex-Galatasaray head honcho divulged the circumstances leading up to the incident:

“When I first went there nine months earlier (3-1 loss to Fenerbahçe), one of Fenerbahçe’s vice-presidents questioned Galatasaray’s wisdom in signing a “cripple”, referring to me with the heart operation I’d had.

“A year later, we won the trophy in their stadium, and we go over to where our supporters are, and a big flag is handed over the wire fence. All the players take a few waves of the flag, it’s handed to me, and I have a few waves and look to hand it to someone.

“I thought, “I’ll show you who’s a cripple”, which was not the smartest thing I’ve ever done in my life. I managed to get the flag in after about the third attempt into the centre circle and turned around to see supporters now climbing the fences to get onto the pitch.

“So I found a bit of pace from somewhere, sprinted into the tunnel and got away with it. I’m sitting in the dressing room afterwards thinking, “that’s me. I’ll be finished. I’ll have a plane ticket and be off tomorrow.

“Our board came in 10 minutes later with tears in their eyes, saying “this is the greatest thing that’s ever happened to the football club.” I’ve never kissed so many moustachioed men in my life.

Graeme Souness’ new-found status amongst the fans and boardroom drew a new nickname and garnered comparisons to an Ottoman general. Ulubatli Hasan, the general in question, erected a triumphant flag at the Siege of Constantinople. To this day, crowds at the Türk Telekom Stadium orchestrate displays of Ulubatli Souness’ time in the spotlight.

Dean Saunders’ 21 goals in 30 games were not enough to push Galatasaray towards lifting the league title. Fenerbahçe first as Galatasaray only manage fourth is what the record books will read. However, the Türkiye Kupasi win and Graeme Souness’ exploits in east Istanbul would dampen any Süper Lig disappointment amongst the Galatasaray faithful.

The owner of the 80/81 European Cup’s golden boot can now add Galatasaray’s Turkish Cup triumph to the five top-flight titles draped in Liverpool-red.

The Turkish centrepiece now stands amongst the Scotsman’s three European Cups in the north of England and the spoils from his dominance at Rangers.