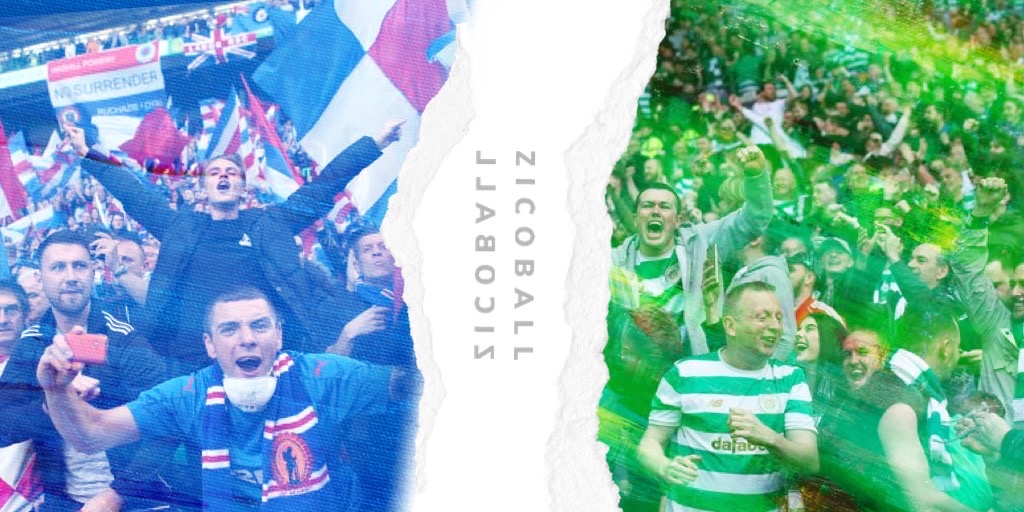 That headline alone might have drawn or dissuaded some.

‘Another dramatised hit-piece on the sectarian rivalry of The Old Firm and football-hooliganism neatly packaged in a sneering class divide?’

Naw.
As a Scottish football fan, it’s tedious to read and all-encompassing paper-umbrella-argument garbage to write.

So, to those of you that have no interest in Our Beautiful Game or; quite reasonably; sport in general, I present to you a sprawling elegiac review on my encounter with the 418th Glasgow Derby and its larger resonance to the human experience as a whole.

Perhaps that’s a tad ambitious actually – but how else will philistines of football come to terms with the subjective truth that sport is as unique and glorious as any other art form?
(Excluding Brit-Pop of course, which as we all know is for the echoic and weak).

Running late for any kick-off is unnerving, but it only heightens the anxiety of this particular discord. The tension in and around Glasgow seemingly swells on an Old-Firm match-day, perhaps somewhat driven by colourful press paranoia.

As the streets lay barren, I try to find the bar that everyone’s in.

A few local public-houses are flush with understandably bhoysterous Celtic supporters anticipating a further extension to the bragging rights that they have reserved over their in-laws in recent years. Bipartisan-I however, need to jot down notes and cannot think clearly while being serenaded by poorly doctored versions of beloved pop songs. I keep searching.

Taking from another one of football’s overly marketed and damaging trades, I decide to gamble on going to a Rangers pub in the expectation of their loss and thus a, hopefully, more wounded, sparse and melancholic atmosphere.

My winning’s beguilingly come in as I score an empty booth perched in front of the speakers just in time for the sounding of the referee’s whistle and the roar of ‘The People’ versus The Papal; commencing the greatest overture in The Homosapien Opera:
‘Il Primo Tacleone!’
(A phrase Gennaro Gattuso might have used/ certainly abused in his Ibrox days).

A Celtic academy graduate recklessly clatters a blue-blooded counterpart in his first real opportunity to do so with an aggression that only transmits itself to the rest of the stakeholders in the stadium; as well as the ones behind me in the pub.

In another setting, it’s probably a straight sending-off but in this raw and purer sporting landscape – it isn’t even deemed worthy of a booking. What it does provoke is a communal expletive rage from the pub’s brethren of Bears.

The Tennent’s has been quickly brought to boil.

Yes, perhaps some might say it is a bit childish to get so worked up over the inconsequential and uncontrollable fallout of a football game – but arguably, like all organised play and polarising art, this power churns endlessly at its very core.

It’s just that some people’s nuclear reactor’s are a bit more simplistic and Chernobyl-y/ Glesga-y than others.

Yet through this lens, football fandom is a legal vice-like any other. A voluntary contract of escapism that, when coupled with a bit of self- cognition, is utterly harmless. It’s only when some can’t comprehend its insignificance to everything except their own ego or lack of direction in life that it becomes an issue and can lead to maltreatment.
Or in more extreme cases in Glasgow, Royal Mail vans full of eruptive IKEA bits.

The first half stutters on with little of note besides both teams engaging in coy acts of destruction to snuff out any shred of quality that they possess. Some find this boring.

I think it’s a bit more of an acquired taste. Two finely tuned athletic orchestra’s cancelling each other out in a manic, broken, improvised jazz routine semi-conducted by a flaming cauldron of resentment. The laboured sparks of a slow-burn are there to see; lulling their way towards a fiery, dramatic conclusion. It’s a different genre of football.

And perhaps it’s this genre that transpires: an almost grassroots-style amateurishness of the game that in turn radicalises fans into greater worship of two symbolic Dear Green entities.

When the game becomes more accessible; more achievable; more relatable as the divides lie closer to home, maybe then a football supporter’s psyche can be cemented. It’s the intensity of the chaos that makes the Old Firm so grasping. The personnel change but the themes remain the same. An adaptation of a timeless prayer. A bitter pantomime that never runs out of acts. It’s an all-consuming Freudball that reflects the maddening imperfections in creativity and human frailty.

But for some; it’s all they’ve got.

Crying for euphoria is all we’ve got.