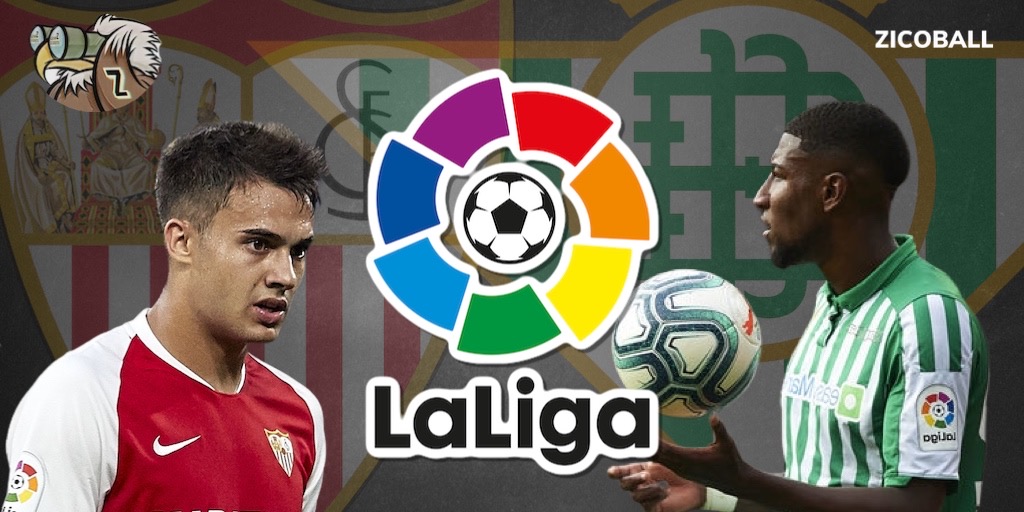 The day we had all been waiting for. Thursday came, and so did the return of La Liga. El Gran Derbi, Sevilla vs Real Betis at the Ramon Sanchez Pizjuan.

Sevilla dominated the game, winning 2-0 with thanks to a penalty from Lucas Ocampos and a second-half header from Fernando following an innovative flick by Ocampos from a corner.

Despite the distractions of bizarre virtual fans appearing as if we had been transported back to being hunched over FIFA 97, our eyes were firmly fixed on three young talents: Jules Koundé, Emerson and Sergio Reguilón.

We have focussed on these individual performances and highlighted their strengths, weaknesses, and whether they are capable of making the step up in grade in the future.

21-year-old French centre-back, Jules Koundé, had a fantastic game for Sevilla showing enormous promise and potential. The Frenchman was both solid defensively and also revealed that he was an attacking threat from corners and crosses. The centre-back pairing of Koundé and Diego Carlos were unphased throughout the game, showing composure and complete control of the backline. Diego Carlos may have taken most of the plaudits in the game, but Koundé was equally dominant and imperious for Sevilla.

The most striking and prominent aspect of Koundé’s game which astounds us each match is his ability in the air. For a relatively small centre-back at 5ft 10, you would be forgiven for assuming the Frenchman is weak in the air. However, you would be mistaken.

Koundé over the whole season has won 70.8% of his aerial duels, ranking him 10th in the whole of La Liga. The Frenchman betters the likes of Stefan Savic, Mohammed Salisu, Sergio Ramos, and teammate Diego Carlos, with his capabilities off the ground (Source: Fbref).

Instead of relying on natural height, or strength, Koundé uses his athleticism, excellent jumping ability and timing to dominate the air, launching himself at each ball as if his life depended on it. During the Seville derby, Koundé showcased his aerial strength on countless occasions, and he really should have converted from a corner had he not attacked the ball with so much enthusiasm and speed, and ultimately affected the timing of the header.

We’ve tried to use two photos to show the height he manages to reach, towering over Cristian Tello without climbing on his shoulders for support. Koundé epitomises that size does not matter.

Defensively, Real Betis created very little and hardly threatened to create any clear-cut chances to test the defence, bar some crosses into the box which were hoovered up easily by Koundé and Carlos. Koundé showed aggressive front-foot defending where he left the line to put pressure on the ball. Koundé’s defensive showing was balanced, however, with him showcasing that on occasions, when necessary, he displayed some passive defending.

It was encouraging to see this balance as he adapted his style based on the attacker that has the ball, the match’s context at the time, and whether he has defensive cover should he step away from the defensive line and leave space in behind.

Sevilla played a high line recognising that Borja Iglesias was not a considerable threat running in behind. The line was maintained well, and the back four showed very few defensive weaknesses. Koundé was also strong in tackles, showed reasonable, though not lightning pace, and showed few signs of physical weakness.

Koundé was not up against lightening forwards but tracked any runs well and knew when to re-join the defensive line to ensure he was not playing anyone onside. He had good side-on positioning, he didn’t appear flat-footed, and he read the game well.

Koundé was not very ambitious nor progressive on the ball, performing below his seasons average for progressive passes and forward passes. In fact, the person Koundé passed the ball to most was goalkeeper Vaclik, followed by defensive partner, Carlos. This goes some way in explaining why Koundé had a pass accuracy of 95%, in comparison Diego Carlos who was ambitious in his pass selection. Carlos attempted numerous sweeping long balls and had an accuracy of 76%, but had nearly double the amount of progressive passing distance than Koundé (Source: Fbref).

This is something that requires more analysis to see whether Koundé does possess a better passing range and vision. During his time at Bordeaux, Koundé was known for having a variety of excellent passing.

Real Betis were very poor on the day. They struggled to do much with their possession, and this made Koundé’s job easier. Nevertheless, considering his age and the pressure of a big derby following an unexpected layoff, the Frenchman showed the maturity and dominance of a veteran. The French list of talented young centre-backs is genuinely eye-watering, and Koundé showed us why he belongs list on it. An impressive and assured performance, Jules Koundé is undoubtedly a player we will continue to watch.

Emerson was the standout player for Real Betis in el Gran Derbi. The Brazilian is on loan from Barcelona and impressed a lot in a team that was lacking energy and fight. The battle that everyone was waiting to see was Reguilón against Emerson. The loanee El Classico derby between Barca and Real Madrid.

Two very attacking full-backs with bundles of energy, enthusiasm, and talent. It was great to watch.

Emerson was camped mainly in his half with Reguilón and Munir bombing up the Sevillan left-hand side to create overloads, meaning that Emerson often looked isolated and outnumbered. Sevilla looked to attack nearly exclusively from wide positions, and because of this, Emerson was regularly tested defensively. It should also be noted that Fekir, who was also on the right-hand side, offered little coverage for Emerson.

There were countless moments, as shown in the photo where Emerson had no support. He is aware of the danger, but there is no one there to help him.

The Brazilian was aggressive in his approach, showing a level of passion and commitment that was lacking from the rest of his Betis teammates. He had a lot of work to do and bar a few crosses that he allowed past him; his overall tackling and defensive positioning was mostly sound. Emerson looked to slide-tackle a lot. A risky method and it did result in him picking up a booking.

Here, the green x’s indicate tackles won. Emerson showed good strength in his challenges, and the majority were clean and well-executed. He looked comfortable in 1v1 tackles and managed to keep Reguilón quiet, especially in the first half.

What was also impressive about Emerson’s performance was his defensive awareness and concentration levels. Emerson was seen to be checking his shoulder a lot when defending from crosses which shows he was aware of his surroundings at all times and not ball watching. Emerson consistently ensured he was marking his man and that his body positioning was sound. He is a powerful and athletic player and can defend well aerially.

Emerson maintained good space to centre-back Bartra; however, there will be inquiries as to whether he let Fernando go free from the corner for the second goal. Emerson had shown exemplary marking and positioning in the box up to this moment, but it goes to show that he still has some work to do defending corners and ensuring he is on his man at all times.

Here we see that Emerson’s positioning is all wrong. He is ball watching and square to the incoming ball in the first photo. By the time of the second photo, he is no longer goal-side.

The black-line in photo one shows where his shoulders are aligned. It’s a weak position to be in when defending a cross. It also means he has no way of knowing where Fernando is. A period of play which didn’t reflect his overall positional and man-marking abilities.

Emerson looked to push quite high in attack when Real Betis had possession. Still maintaining width, Real Betis in possession were in a 3-5-2 shape. His link-up play with Fekir and other teammates was slow and like most of Real Betis’ possession; passive and lacklustre. In fairness to Emerson, he did not receive many runners ahead of him as Fekir wanted shorter passes to feet, and Iglesias showed no energy or movement.

Emerson is usually most impressive in the final third; however, he was not particularly progressive or creative in his approach.

This graphic from Statified Football shows the little attacking threat Betis possessed. They had spells of possession but did very little with it. Emerson, who has provided the most assists for Betis this season, had little attacking impact on the game.

Overall, Emerson is undoubtedly a player that top teams should be keeping an eye on. If Semedo leaves Barcelona, it is quite likely that the 21-year-old will be part of the Blaugrana first team. However, should Barca choose to sell, I imagine a host of clubs will come in for him.

It wasn’t a perfect game, and he contributed little going forward. A brief lapse in concentration and marking from a corner allowed Fernando the space to head home the second goal, but having said that, he was still the most impressive Real Betis player on the day, and deserves credit for keeping Reguilón largely quiet.

Sergio Reguilón has had a breakthrough campaign at Sevilla, on loan from Real Madrid. Currently, the 23-year-old Spanish full-back is making on average 4.1 tackles and interceptions per 90, while also completing 1.4 dribbles with a 61% success rate. He’s an incredibly progressive player, averaging 523 metres of both progressive passing and carries per 90 (Fbref).

He is also making 1.6 key passes per and has registered four assists from left-back this season. Reguilón had an indifferent game against Betis. It was clear to see that he is still trying to get up to speed and fitness, though he did contribute to attacking transitions and had a very tough battle against Emerson in the first half.

Reguilón completed two key passes in the game, but didn’t complete a single defensive action, and failed with his only attempted dribble in the whole 90 minutes. Reguilón received the ball in incredibly wide positions, almost like a second winger at times, with Munir in front of him. He was given the task to take advantage of the space on that Betis right-hand side, where Emerson had little cover at times. He failed to take advantage of this situation in the first half, but was much better in the second half and grew into the game.

As you can see in this Stats Zone radar, Reguilón was incredibly positive with his passing in attacking transitions. He was always looking to find the ball inside to one of the Sevilla attackers and help them move into the box.

It was not the Spaniards best game, but he has the potential to become a superstar. He’s likely to get a move to a club at a higher level than Sevilla. Currently on loan from Real Madrid, Sevilla will look to make his deal permanent but will have a challenge keeping Reguilón at the club for years to come. With the dearth of leading, young, and well-rounded left-backs in modern football, Reguilón is someone that truly deserves the attention of Europe’s biggest clubs.

Analysis by: GZS – @GenZScouts – Make sure you follow the team on Twitter for further in-depth video analysis.