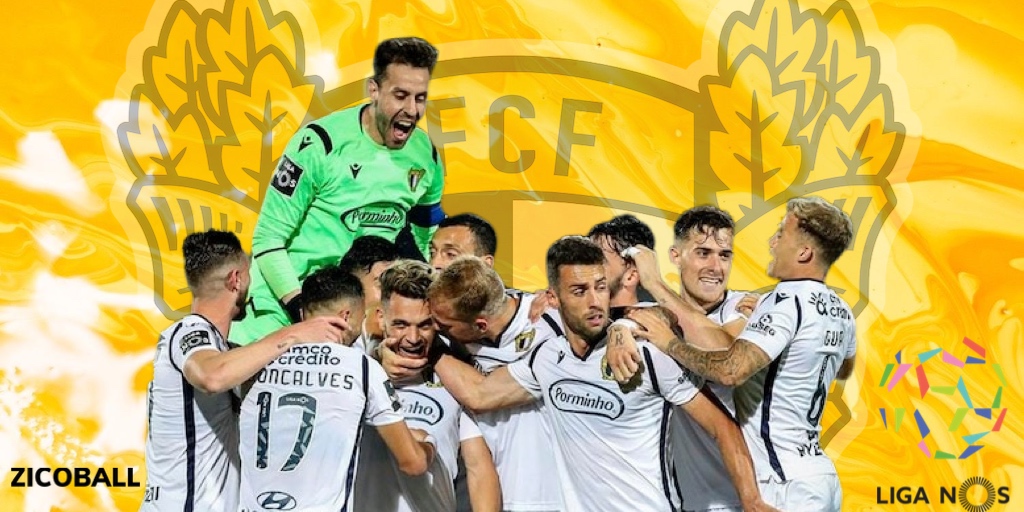 Famalicão produced the shock of the week with a superb 2-1 victory over league leaders Porto on Wednesday night as The Liga Nos burst back into life.

Make no mistake, this was a deserved victory, and it showed that Famalicão are chasing a Europa League position on merit. The win puts them fifth, although this will become sixth if Rio Ave can beat lowly Paços de Ferreira at 21:00 on Sunday.

Nevertheless, it’s already an upward movement from the seventh position they occupied before the resumption of the league. Famalicão’s victory highlighted how well organised they are under manager João Pedro Sousa.

They defend as a unit and are incredibly hard to break down. It took an excellent Porto move to deny them a clean sheet. Their backline sit relatively deep and are content to soak up pressure; however, this doesn’t mean that they are a side who don’t like to venture forward much. On the contrary, when they have the ball, they break with purpose and ingenuity.

Against Porto, Famalicão were clinical and didn’t waste good opportunities. This was characterised by the fact that their two shots on target both resulted in goals.

When out of possession, their attacking players work hard. This work ethic was rewarded with the opening goal of the evening. The goal came from chasing lost causes which forced Porto to knock the ball back to their goalkeeper, Agustín Marchesín. Marchesín forced to rush his clearance and ended up haplessly scuffing it to a willing Fábio Martins who made no mistake in stroking the ball into the empty net.

Famalicão have assembled a competent side and just glancing at the team sheet shows they have fully utilised the loan market. Seven of their starting 11 against Porto were loanees. The club has built a competitive team without breaking the bank.

You may think Famalicão would resemble a team of strangers, but this certainly doesn’t look the case. The loanees were integrated seamlessly, and all seemed to be on the same wavelength throughout the game. Cynics might suggest they’ll struggle next year when the loanees return to their parent clubs, but if they have Europa League football next year, they will potentially be able to attract players a level above.

Famalicão have an array of young players now thriving with experiencing first-team football.

22-year-old Uroš Račić, on loan from Valencia, produced a mature combative midfield performance that defied his age. It would have been easy to mistake him for a veteran campaigner of the division. Parent clubs such as Valencia will only benefit in the long run, as will Famalicão. They are proving to be a suitable destination for the youngsters of big European clubs.

Loanees will return sharper and more seasoned, putting them in a position to break into first-team setups. In an age where the transfer market regularly produces club-record fees, it’s good to see a club maximising the budget-friendly option of the loan market.

As a newly promoted team, it would be expected, particularly against a streetwise side like Porto, that Famalicão would be tactically naive. They subverted those stereotypical views with a wily display.

When Porto tried to be clever or unpredictable such as taking free-kicks quickly, Famalicão were ready for it and actively prevented them from doing so. They didn’t get drawn into any pettiness or the dark-arts that some of the Porto players tried towards the end. You guessed it, most notably, Pepe. It was refreshing to see a side who have clearly done their homework on the league and its opposition and adapted accordingly.

For all of Famalicão’s strengths, this was not a vintage display from Porto. They were wasteful in front of goal, sluggish in possession and generally devoid of ideas in attack.

However, Porto’s one shining light was Mexican international, Jesús Corona. The 27-year-old lined up as a right-back in a 4-4-2 formation but played more like a marauding wing-back. Whenever Porto were in possession, he was consistently available in space, and positionally progressive. It was of no coincidence that their biggest attacking threat came from the right-hand side.

When he was picked out, Corona’s close ball control was sublime. He pulled a couple of tricky looking crossfield balls down from the sky with absolute ease and grace. His eye for a pass is unquestionable. With just over ten minutes gone, he clipped a beautiful ball over the top that caught Famalicão flat-footed. Moussa Marega was through on goal but unfortunately for Porto, the striker scuffed his shot into the legs of Rafael Defendi.

Defensively, Corona was brilliant, positionally sound and calm in possession. He made several crucial tackles and interventions that denied Famalicão clear sights of goal. Corona capped a magnificent performance with a goal and looked at one point as if it would be enough to salvage a point from the match.

Corona collected Sérgio Oliveira’s defence-splitting pass in the penalty area, and then lashed it in at the near post with his weaker left foot. The confidence and power with which he struck the ball on his unfavourable foot demonstrated what a talent he is.

With Porto dropping points, Benfica were presented with a huge opportunity to take the lead of the league if they could beat lowly Tondela. Surprisingly, they were unable to find a breakthrough as they stuttered to a 0-0 draw.

A superior goal difference was enough to send them top of the table, but it now means that both Benfica and Porto are locked on 60 points with nine games remaining. The Eagles carried a good attacking threat throughout the match. They could have been ahead inside 90 seconds but for a sharp stop from Tondela ‘keeper Cláudio Ramos.

Captain Jardel’s header was a whisker wide later on in the half. Benfica proceeded to hit the woodwork twice in the second half but could not find a breakthrough. The slight worry for manager Bruno Lage has to be the fitness of some of his key players. Pizzi in particular tired considerably in the second half before substituted and was far less of a threat than he was in the first. In the 45 minutes prior, Pizzi was central to every attack.

Take nothing away from Tondela though, defensively they were magnificent and deserved a share of the spoils. Philipe Sampaio in the centre of defence was superb throughout. He threw himself in the way of shots and won headers he had no right even to contest, never mind win.

The point helps keep Tondela clear of the relegation zone. They know only a drastic loss of form will cause them to get dragged back into the scrap for survival. If they keep accruing points steadily during the run-in, it should ensure they avoid any nervous moments over the coming weeks.

A perfect start given most people expected Tondela to come away with nothing.

The rest of Liga NOS

Sporting Lisbon shared the spoils away at Vitória de Guimarães as they played out an entertaining 2-2 draw.

Sporting looked a good side going forward, with Andraž Šporar as the fulcrum of the attack. Šporar bagged both goals in an impressive display. It is worth remembering that this was Sporting’s second game under new manager Rúben Amorim who had masterminded Braga’s run to third in the table. Once Amorim has found his feet and had more time to gel his players and tactics together, there is no doubt they will be a force to be reckoned.

Guimarães were incredibly resilient, surviving the last 13 minutes plus added time, with ten men. The sending off was ill-timed as they were starting to come into the ascendancy; Guimarães looked most likely to score again. Proving this tough to beat bodes well for any Europa League aspirations.

Braga’s surprise 3-2 away defeat to Santa Clara on Friday night meant that all of the top four sides failed to win in the first fixture back following the pandemic. The odds on that before the start of play on Wednesday would have been gigantic. New manager Custódio needs to get his side back on track, or they will be in danger of throwing away their good start and their position in third place.

At the other end of the table, Paulo Sérgio’s task of saving Portimonense received a massive boost with a 1-0 home win over Gil Vicente. This cuts the gap to safety to only three points. However, as aforementioned, Paços de Ferreira haven’t played since the resumption of the league and will move six points clear with a win.

While there is hope for Portimonense, things look increasingly bleak for bottom-side Aves. Aves were beaten 2-0 at home by Belenenses which leaves them nine points adrift of safety, which could be 12 points before they next play.

This round of fixtures will be completed on Sunday, before game-week 26 starts on Tuesday with Gil Vicente hosting Famalicão. FreeSports TV will once again show selected Liga Nos fixtures throughout the week in what continues to be an intriguing conclusion to the Portuguese season.