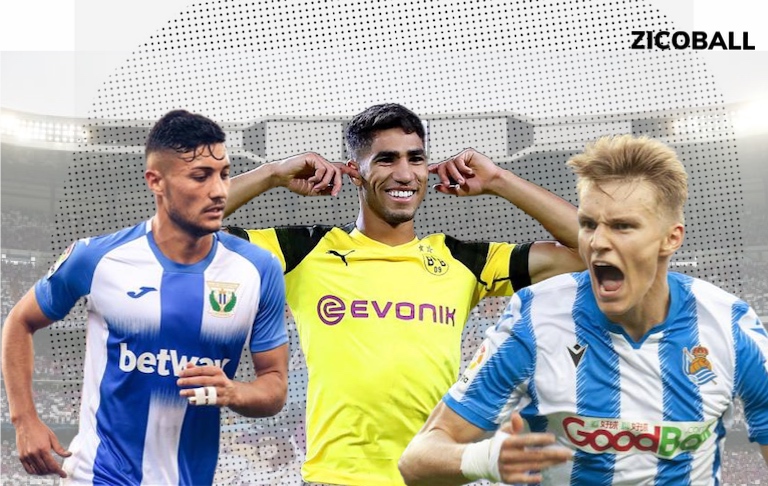 Real Madrid’s conveyor belt of potential superstars sees no end in sight. When it comes to churning out match-winning talent, Madrid are a cut above the rest.

The prospect of La Liga is seemingly edging closer to a return. 81,044 empty seats at El Bernabéu look set to oversee the star-studded squad competing for what would be Madrid’s thirty-fourth top-flight triumph.

Away from the capital, there is a talented trio on loan plotting how to write themselves into Zinedine Zidane’s plans. Pulling on the white jersey at the start of next season is their ultimate aim. An ever-present scenario likely to be replayed in the dreams of every young Madridista.

A bombing Moroccan “wing back”, Norway’s most coveted rising star and a local boy regarded as one of Spain’s most lethal dead-ball specialists.

A converted penalty and three direct free-kicks make up for more than half of Óscar Rodríguez’s seven La Liga goals this season. The highlight, undoubtedly, was the 94th-minute showstopper to see Leganés clinch all three points at home to Imanol Aguacil’s Real Sociedad. Not only easy on the eye, the colossal strike proved that the Madrid man has the nerve to be called upon when required.

Cementing a spot in Zidane’s dressing room will be a difficult task given the array of attacking talent ahead of him. An extended loan period at lowly Leganés looks unlikely. Leganés now face a relegation battle without Barcelona-poached forward Martin Braithwaite. Rodriguez’s journey has all the signs of continuing in the Spanish top tier, at a club competing for European delights.

AS reports that Real Betis hold a keen interest and intend on signing the twenty-one-year-old on a permanent deal in the summer. Nabil Fekir, Sergio Canales and Óscar Rodriguez in a Real Betis midfield next year? Yes, please.

Rodriguez’s start to life in La Liga will have turned heads amongst the Madrid hierarchy, and any permanent deal should see a buy-back clause attached. Los Blancos have been the architects of similar transfer negotiations in the past, most notably with Casemiro. Now a mainstay in the heart of Zizou’s midfield, Real Madrid activated a €7.5m buy-back clause following Porto’s desire to make the 2014-2015 loan switch permanent for €15m. A smart piece of business with the Brazilian defensive midfielder worth in excess of €60m in the current market (pre-COVID-19).

The midfielder’s competitive debut for Størmgodset at 15 was the start of the steady but meteoric rise to the fringes of Real Madrid’s first team. Martin Ødegaard has produced a season touted for him while out-classing his fellow professionals in Norway, some of whom were twice his age.

Registering four La Liga goals and laying on five assists for his teammates in the blue and white of La Real, Ødegaard has been earmarked as Luke Modric’s replacement in the centre of midfield. The Norwegian’s ability to seemingly ghost past players, find a pocket of space and pick the right pass, has been integral to his current side’s gallop to fourth. Sitting ten points adrift of Real Madrid in second, Real Sociedad are on course for their highest finish since gaining Champions League qualification eight years ago.

Talks over Ødegaard’s future will be held soon with Real Sociedad eager to hang on to the playmaker for the remainder of his two-year loan deal. This season’s performances, coupled with the state of the economy, will impact his whereabouts come the start of next season. Zidane faces a difficult decision and much will decide on how tight the purse strings are.

Ødegaard has proven he’s capable of playing a role in this Real Madrid side. Honing his trade for another year on loan, however, will positively impact future Real Madrid sides for years to come. As the next generation looks to replace the current, Ødegaard has situated himself in pole position to play the leading role.

The young African has managed eighteen goal contributions in the Bundesliga and Champions League so far this season. A tally which is likely to be added to.

Hakimi has captured the attention of Madrid supporters who are desperate to see the Moroccan international’s return. Dortmund’s 0-2 Champions League away victory against Slavia Prague saw Hakimi announce himself on the biggest of stages. The defender, who played left wing in front of Raphael Guerreiro, scored two goals and put in a man of the match performance in the Czech Republic.

The Borussia Dortmund loanee’s path to Real Madrid’s first team is uncertain. Daniel Carvajal’s presence at Real Madrid is one which oozes consistency and stability, and any competition looking to dislodge Spain’s starting right-back faces a stern test ahead.

Hakimi has shone during his two-year loan in Germany and has consequently attracted suitors from all over Europe. Chelsea, Arsenal, PSG and Juventus are said to be keen on acquiring the services of the Real Madrid man. Hakimi’s probable doubts over game time in Spain could see him exploring avenues with another European giant.

Hakimi, now in the spotlight as the Bundesliga appears alone on stage, is firmly in the shop window.

Transfer rumours circling the top European clubs are rife, without having a plethora of European football to report. Although we may see less transfer activity across the board this summer, the aforementioned trio will be high on many’s wish-lists.