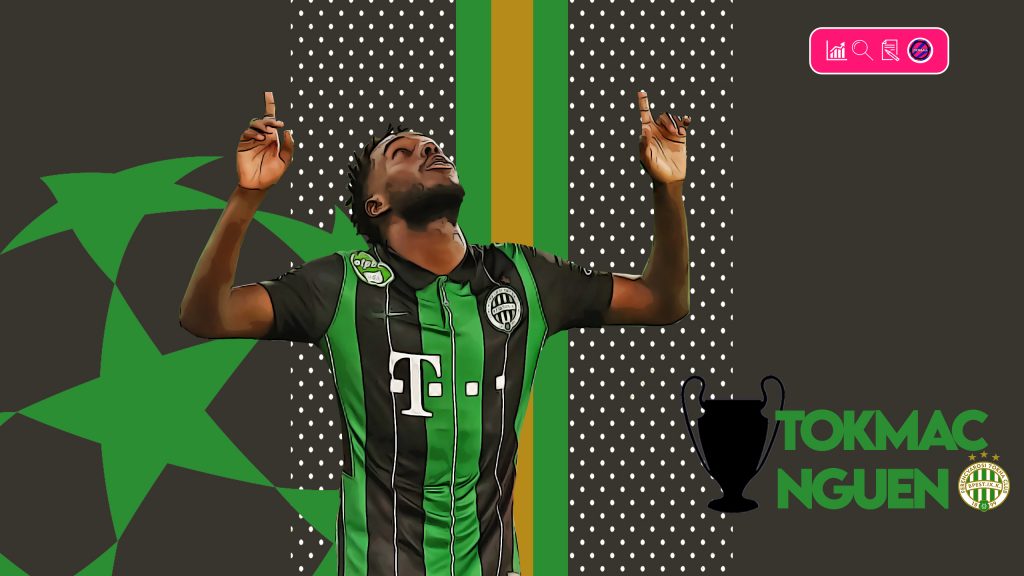 An eerie silence fills the Nou Camp, and all that can be heard on the broadcast is a call for a quickly released pass up the channel and into space behind the Barcelona back-line. Bosnian left-back Elder Civic is alert and fires a ball over the shoulder of Gerard Pique for Tokmac Nguen to latch onto – and latch onto the ball he does.

With plenty of work still to do, Clément Lenglet is almost effortlessly turned inside out before Nguen thunders a strike past Marc-André ter Stegen and into the roof of the Barca net. It was almost the perfect start for Ferencváros. A mere nine minutes in, with the scores level at 0-0, playing in their first Champions League group game in twenty-five years, Nguen looked like he had given Fradi an unexpected lead over one of Europe’s aristocracy – and would have done so had he not strayed offside by a mere inch or two.

This season’s UEFA Champions League sees a fascinating synchronistic storyline of both club and forward attempting to make hay while the sun shines. Hungarian champions, Ferencváros, have spent a decade steadying their own ship, qualifying for their first UCL group stage in over two decades after a lengthy period of internal turmoil, while their creative pulse Tokmac Nguen looks set to assert himself centre stage in front of Europe’s elite scouts. Having provided three goals en route to this season’s group phase – including a stabbed finish to eliminate Neil Lennon’s Celtic – Nguen and Fradi have found themselves dealt clashes with the aforementioned Cataluyans, Dynamo Kiev and the kings of Turin, Juventus.

A Long journey to the Champions League

For the man known as Tokmac, if you’re to read the name from the back of his shirt, Nguen started life in north-west Kenya, born in a refugee camp to a pair of South Sudanese parents having fled famine and civil war in their homeland during the early 1990s. Captured in Kevin Carter’s Pulitzer prize-winning photograph “The Vulture and the Little Girl” – a harrowing image and heartbreaking tale worthy of 2,000 words of its own – and known as the ‘silent famine’, the emerging misery in Sudan during 1993 saw over 20,000 Sudanese citizens lose their life and displace over 100,000 others. Those who were fleeing encountered the help of relief efforts across the border to neighbouring Ethiopia, Uganda and Kenya, and those lucky enough to escape with their life found sanctuary for a brief period before moving on to greener, sometimes icier pastures later down the line.

At age 5, a shift in fortune and climate saw Nguen arrive in Norway. For a child arriving in the icy cold winds of Scandivania from the searing heat of the Kenyan plains, this will have seemed like another world, an entirely different climate and experience. Tokmac turned to football early and first appeared for Norweigian outfit Strømsgodset at just 18 years of age, starring in a first-XI that later included Martin Ødegaard and during his tenure in the Tippeligaen was called on to represent his adopted homeland at under-18 and under-19 level.

Since 2019, Nguen has provided an attacking threat for a Ferencváros side who have climbed back from financial turmoil and a stint in the second-tier to the pinnacle of Hungarian football, winning back-to-back titles under the tutelage of Serhiy Rebrov. With eight goals for the side last season creeping in from the left-wing position, Nguen has already notched four in the league thus far. Quick, direct and possessing astute intelligence when it comes to exploiting space in and behind the defence, Tokmac Nguen can be a defender’s worst nightmare.

His unabashed, merciless style of play on the pitch is complemented by his outspoken willingness to steer the conversation towards social justice off it. While stars in the Premier League and Bundesliga were displaying written messages on their undershirts to the television cameras to show support for the Black Lives Matter movement in June, Nguen was doing the same after scoring for Ferencváros in a 1-1 draw with Puskás Akadémia.

Shortly after Tokmac gave Fradi the lead midway through the first half, he removed his shirt to display a handwritten message of support for the movement – simply reading “Justice For George Floyd”. While the likes of Jadon Sancho, Weston McKennie and Marcus Thuram avoided any punishment for their displays of solidarity in Germany, Nguen was reprimanded for his efforts and was left “shocked and angry” as he was told to stay silent on the issue by the powers that be.

After the game, Nguen responded to media questions, asserting: “It was a very important message, and I’m standing by it.”

A disciplinary committee met hours after the incident and gave a verdict that any further such displays would be met with “actual penalties.” It is one thing to speak out in admittedly liberal countries such as England or Germany, but to do so in a former communist state like Hungary requires an extra ounce of bravery.

Nguen’s response to the criticism from the Hungarian FA was, “You’re supposed to only play football. You’re supposed to do your job on the field. They don’t want you to have an opinion because of politics.” A player, clearly unafraid to poke his head above the parapet in a nation visibly edging towards a sense of authoritarianism under the government of Viktor Orbán.

To Orbán, Tokmac Nguen – a black refugee and African immigrant into Europe – represents everything he is trying to eradicate from Hungarian society under the “procreation not immigration” mantra. For the national football association to threaten to throw the book at Nguen for a perceived slight at the status quo is no surprise considering the direction the country’s leading political party is determined to steer. Despite the political climate in Budapest, Nguen has decidedly shown courage in his celebration that mirrors his determination to work himself into goal scoring positions.

While Nguen made the headlines for removing his shirt during the summer, what shirt he will eventually pull on in the international game is still undecided. A call up to the Norweigian squad seemed inevitable during his final season at Strømsgodset, but it never came. Instead, Nguen was offered the opportunity to suit up for South Sudan at the end of 2019 along with thirteen other members of the Sudanese diaspora.

AFCON and UCL for Nguen

In October 2019, South Sudanese coach Ashu Cyprian Besong and his staff named a squad for a set of AFCON qualifiers that included Tokmac Nguen along with twelve further players of South Sudanese descent that played their club football in Australia. Sharing a similar story to Tokmac, there is a sizeable Australian contingent of Sudanese refugees who over the last two years have been handed their international debuts for South Sudan after turning out for their adopted nations at underage level – Abraham Majok, Ruon Tongyik and midfielder Jackson Morgan to name but a few.

While South Sudan begins to make inroads into international competition and find its footing on the African continent, it will rely heavily on players developed and coached abroad. For Tokmac, he failed to show up to the training camp, opting against pulling on the blue and red sash of South Sudan last autumn with talk of a call up to the Norweigian senior side still rife among the Norweigian fans and media as his career propels from strength to strength.

In almost perfect synchronicity, the most successful side in Hungarian football history are also riding a wave of recent success into this year’s competition. Ferencváros have had to be extremely patient for their opportunity to return to the top table of European football and have been rewarded for their efforts with a pair of glamour ties in Turin and the Catalonian capital during the group stage along with two head-to-heads in what will undoubtedly be seen as the ‘Rebrov Derby’. Fradi coach, Serhiy Rebrov, has overhauled the side at Ferencváros since his arrival in 2018 and has proved himself a tactically astute coach with impressive game management ability. This will be no surprise to some, considering Rebrov spent a large chunk of his playing career under the stewardship of influential Ukrainian boss Valeriy Lobanovski at Dynamo Kiev.

Having turned the tide on their misfortunes, Fradi will now be looking ahead and securing a sustainable financial future for the short-to-mid term. It’s well documented that one season in the Champions League group phase can provide a healthy springboard for perpetual domestic success outside Europe’s top five leagues.

Dinamo Zagreb capitalised on the recent influx of cash thanks to their Champions League exploits and are now enjoying a run of fourteen domestic titles out of the last fifteen. Ludogorets Razgrad of Bulgaria excelled passed the qualifying stages for the first time in 2014 and enjoyed six games against Basel, Liverpool and Real Madrid for their efforts – they have won the last nine Bulgarian titles. If Fradi and their board play their cards right, six strong performances and some shrewd financial decisions could see them dominate the Balkan nation for years to come.

Having given Barcelona an early scare in their opening game before succumbing to the almost autonomous excellence of Lionel Messi, Ansu Fati and company, to an eventual score of 5-1, Fradi will have high hopes going into their first Champions League home game since 1995 tonight against Dynamo Kiev. While a top-two finish and qualification for the knockouts look out of the question, Ferencváros look set to fight tooth and nail for a spot in the latter stages of the Europa League. A defence marshalled by the well-drilled pairing of Miha Blazic and Elder Civic, Denes Dibusz in net is a safe pair of hands, while the scorer of their solitary goal at the Nou Camp – Igor Kharatin – has the ability to recycle the ball at the base of midfield while providing a sturdy screen in front of the back four.

Scoring opportunities will come few and far between in Group G. So, Nguen, Brazilian playmaker Isael, and Ivorian target man Frank Boli will need to ensure their finishing is clinical if they want to be playing European football beyond Christmas.

For both player and club, this season is one of both celebration and opportunity. Club officials have opted to stage home games at the national stadium, the Puskás Aréna, due to its larger capacity and the increased ability to host 15,000 more fans at home games under UEFA’s 30% capacity rule. As for Tokmac Nguen, this season’s exploits in Europe is only one chapter in a long, almost unfathomable, journey that is likely to peak at an even higher level. From refugee camp to the Nou Camp, there is little doubt that the man from Kenya has planted himself front and centre of Europe’s premier shop window and a move to an elite league could follow in just a matter of months.