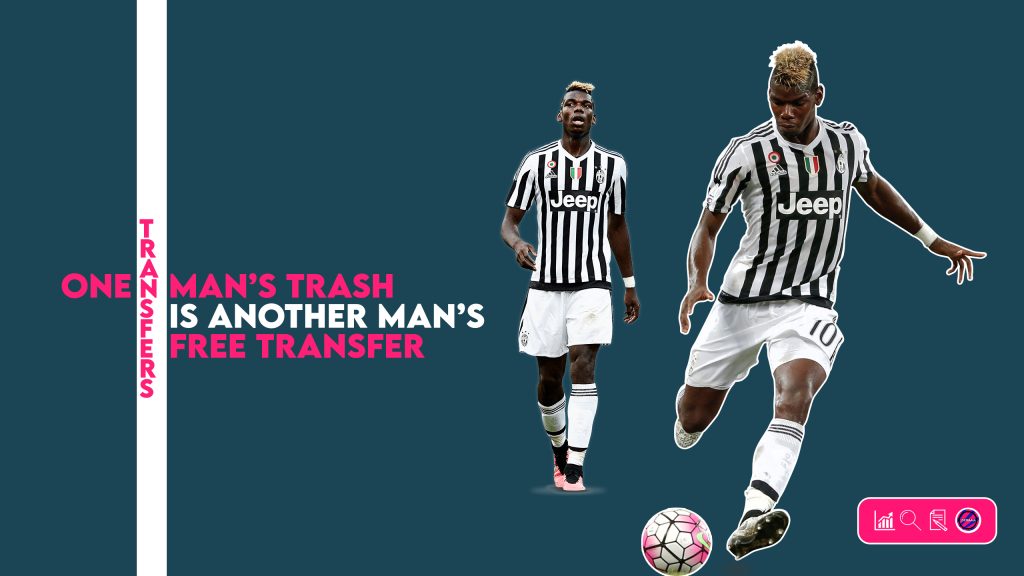 Top 5 of the best free transfers: often used by clubs when the purse strings are tight. Managers working to a budget will scour the market for a glimmer of hope. Players deemed no longer worthy of a new contract desperately seek a team of similar quality.

However, it’s not all doom and gloom. The opportunity is there to discover a diamond in the rough. It’s not unusual to find players running their contracts down amidst unrest in the camp. Pariahs from the big clubs will actively seek talented individuals nearing contract end to double their wages. A club’s prized asset may view it as the only option after a rubbished transfer request.

In light of the more attractive end of the free-agent market, and in no particular order, we’ll look at the top 5 free transfers to have graced clubs without taking a hit on the pocket.

Daylight robbery would spring to mind as Andrea Pirlo swaps AC Milan for Turin. However, the San Siro club chose not to hand the maestro a new contract. Thinking his peak came in red and black and his best days were behind him, AC Milan ushered the 31-year-old towards the exit door.

Before allowing Pirlo to leave, the playmaker scored 41 goals and registered 71 assists in 401 games for AC Milan. Following a decade at the club, the Italian left the Milanese outfit in 2011 after winning his second Serie A title that season. Pirlo lined up with some prestigious names for AC Milan; Clarence Seedorf, Kaka, David Beckham, Ronaldinho, and the list goes on.

Milan has only picked up one piece of silverware in the post-Pirlo era, declining in footballing terms. The 2016 Supercoppa Italiana winners found themselves in the final due to Juventus winning both the Serie A and the Coppa Italia that season. As a result, AC Milan only qualified to compete in the Qatari event as the runners-up for the Coppa Italia in 2015/16.

Pirlo’s dominance over Serie A continued in Turin, unsurprisingly. There would be no slowing down for the man who dictated the game at his pace. Instead, there would be four years of dropping deep and spraying Hollywood balls to willing recipients for the Bianconeri.

“ONLY A GENIUS HAS SUCH INTUITION. PIRLO IS FOOTBALL FOR US.”

Pirlo won the Serie A in all four years Juventus were lucky enough to have him. The elegant ball player was an integral cog in Juventus’ rise to over a decade of dominance in Italy’s top-flight. Easily one of the best free transfers of all time.

Rivalling Andrea Pirlo’s free transfer, Juventus engineered a move which saw Paul Pogba move to Italy for nothing. With Pogba struggling to impose himself onto Sir Alex Ferguson’s side, the Frenchman refused to sign a new contract, leaving Manchester to cast his net on Turin.

“IT IS DISAPPOINTING. I DON’T THINK HE SHOWED US ANY RESPECT AT ALL, TO BE HONEST. I’M QUITE HAPPY THAT IF THEY [FOOTBALLERS] CARRY ON THAT WAY, THEY’RE PROBABLY BETTER DOING IT AWAY FROM US.”

Pogba’s net proved fruitful as he made 178 appearances, scoring on 34 occasions and laying on 40 assists for members of the Italian superpower. On his expedition to Italy, like Pirlo, Pogba steered his side to four domestic titles.

Juventus’ shrewd business acumen would rear its head again after raking in £89m for the midfielder they had acquired for free only four years earlier. Nevertheless, Manchester United returned for their player and paid Juventus a handsome holding fee.

The Polish marksman carved out a reputation for himself while donning the yellow of Dortmund. 103 goals in 187 games; a prolific striker for the big occasion with two Bundesliga titles and one cup triumphant backing up individual accolades.

Lewandowski announced plans to leave Dortmund in January 2014, six months before his contract was to expire. At the ripe old age of twenty-five, Bayern were getting a player at the top of his game.

The 250+ goals for Bayern Munich, and counting, have reaffirmed his decision to move. Now revered by fans of the Bavarian club, Robert Lewandowski is considered one of the best strikers/free transfers in world football to this day.

Growing up and playing with makeshift footballs on the streets of Nigeria, via Germany and then Paris. Jay Jay Okocha’s path to Lancashire was steeped in flair. A masterstroke from Bolton’s hierarchy consequently clinched the Paris Saint Germain player’s services for free.

Jay Jay Okocha: ‘so good they named him twice,’ would cement himself as one of Bolton’s best-ever players during his stint in England. The Nigerian’s trickery would light up the Reebok Stadium week-in, week-out, as Bolton Wanderers dabbled in European competition.

Signed and mentored under the stewardship of Sam Allardyce, it turned out to be the double act that football lovers were unaware they wanted. Okocha played a pivotal role in Bolton’s 2005/06 UEFA Cup exploits. The Wanderers ran out against the likes of Besiktas, Sevilla, and Zenit before crashing out to Marseille. Tal Ben Haim’s fatal own goal to make it 2-1 over two legs cost Bolton and Okocha dearly.

“I’VE BEEN WITH THIS CLUB AS A PLAYER AND MANAGER FOR 17 YEARS AND I’VE NEVER SEEN A BETTER PLAYER. PEOPLE TALK ABOUT NAT LOFTHOUSE AND THE LIKE BUT I HONESTLY BELIEVE OKOCHA IS THE BEST WE’VE HAD.“

The extract above from his Bolton gaffer’s book sums it up perfectly. Okocha’s 141 appearances for the Lancashire club have earned him a seat at Bolton’s legends table alongside modern-day club icons Kevin Davies, Jussi Jaaskelainen, and Ivan Campo. All of whom Okocha starred alongside.

Michael Ballack had been pulling up trees in the Bundesliga and attracting global interest. Ballack had just completed a domestic league and cup double in two consecutive years for Munich. A feat which had other European giants purring at the thought of landing the twenty-nine-year-old at the end of his contract.

Despite Chelsea’s free-spending habits with the arrival of Roman Abramovich, Bayern Munich’s German international captain touched down in the nation’s capital free of charge. José Mourinho’s first signing at Stamford Bridge was an astute one at that.

It was the Premier League that gained a new superstar as he signed a three-year deal. Frank Lampard, Michael Essien, and Claude Makelele awaited Ballack’s arrival in Chelsea’s midfield.

Mourinho’s signing added a proven winner to the Chelsea ranks. At the commencement of his four-year stay in London, Ballack had added a League Cup, three FA Cups and a Premier League title to his collection. Not bad as far as free transfers go.