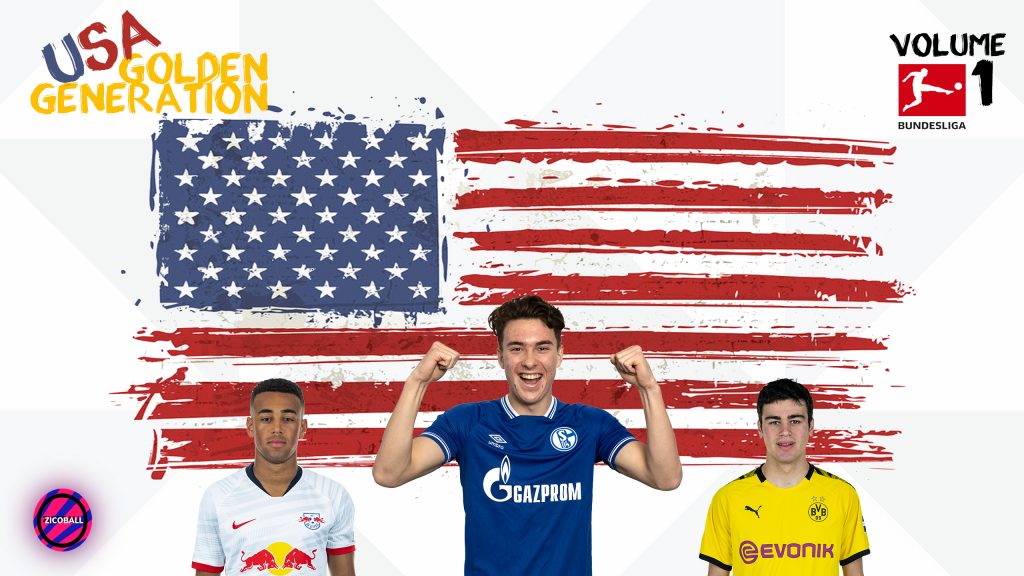 As the next wave of generational USA Soccer talent starts to grace leagues across the world, a handful of Americans are beginning to shine through, competing with Europe’s best.

The time of Landon Donavon and Clint Dempsey has been and gone. Now, after missing out on the World Cup in 2018, the US Men’s National Team (UMNT) is spoilt for choice. The UMNT are favourites in North America to qualify for the upcoming Qatari tournament.

Germany is now a favoured destination for young talent to flock to be nurtured and developed. It has seen success from fellow non-German players like Jadon Sancho, Jude Bellingham, and Alphonso Davies. They have blossomed into national team stars, and in Canada’s Davies, the Bundesliga has laid the foundations for a Champions League winner.

So, which US-born talents have been able to thrive in Germany after arriving from the 50 states?

There is heavy hopes on the shoulders of Giovanni Reyna. The Dortmund man is the next golden-boy of the USA, alongside Christian Pulisic of Chelsea. It’s clear to see why the 18-year-old is catching the eye of fans and clubs across the globe.

The young attacking midfielder is a crucial feature for the vicious Dortmund attack on show in the Bundesliga and Champions League. Reyna possesses superb feet and a football IQ above most.

Eight goal contributions in 28 games, in all competitions, may not usually turn heads. However, for a USMNT player at the highest level in football – you can’t shun what Reyna has already shown in the last two seasons.

As a creative winger, Reyna relishes when given the opportunity to create chances for his teammates around him. The Dortmund man boasts 2.3 successful dribbles, 43.5 successful passes, and 1.6 key passes per game. With this kind of output, he can aid an attacking force alongside Sancho, Erling Haaland, and Marco Reus.

Drawing comparisons to Pulisic will be no surprise for anyone with knowledge of Giovanni Reyna. The current Dortmund starlet averages a goal in every 6.3 games, compared to Pulisic’s goal in every 5.3 games.

As the youngster starts to find his feet in Germany’s top flight, it won’t be long before more goal involvements start piling in for Reyna and Dortmund.

A product of the New York Red Bulls academy, Tyler Adams left the big apple to pursue bigger things overseas. He has been a star since arriving in Saxony.

Featuring in 55 games since joining in January 2019, Adams has found his feet very quickly whilst playing for another Red Bull-owned team. He has become a clear favourite for Julian Nagelsmann and fans of Die Roten Bullen.

Costing only $3 million, it was clear the holding midfielder was a piece for the future. It is evident that the step up to the next level wouldn’t be an issue for the New Yorker.

Playing across the pitch hasn’t been too strenuous for the versatile American this season. Whether it is at right-back, right midfield, or sitting in front of the back three, Adams has been able to thrive wherever utilised.

With 1.3 interceptions, 0.9 clearances, and 0.6 tackles per game, Tyler Adams has been able to put on show precisely what people expected from him defensively. It won’t be long until he’s on the radar of clubs outside of Germany.

A product of the Barca Residency Academy, based in Arizona, Matthew Hoppe leapt onto the football scene by scoring a hat-trick in Schalke’s only win this season.

Three goals against TSG Hoffenheim, followed by two more goals in the next two games, cemented Hoppe’s role in the starting lineup alongside Mark Uth.

Hitting the back of the net has been hard for Die Königsblauen in the 21 games played so far. Nevertheless, this has not been the case for the Californian striker, scoring five goals in 11 games.

Playing as a target man in this Schalke side has been challenging for the 6″3 striker in creating many chances. However, with 1.6 shots and 2 aerial duels won per game, the US frontman has found a way.

Hoppe has been one of the shining lights in the struggling North German side. The 19-year-old has been vital during the current Bundesliga campaign, although unable to engineer a real chance of survival. Schalke will need more than just Amine Harit and Matthew Hoppe to survive and fight out of Bundesliga’s relegation battle.

This article’s two notable absentees are the 20-year-old duo of Josh Sargent (Werder Bremen) and Chris Richards (Bayern Munich). Along with the scintillating trio above, America’s future is bright in Germany.