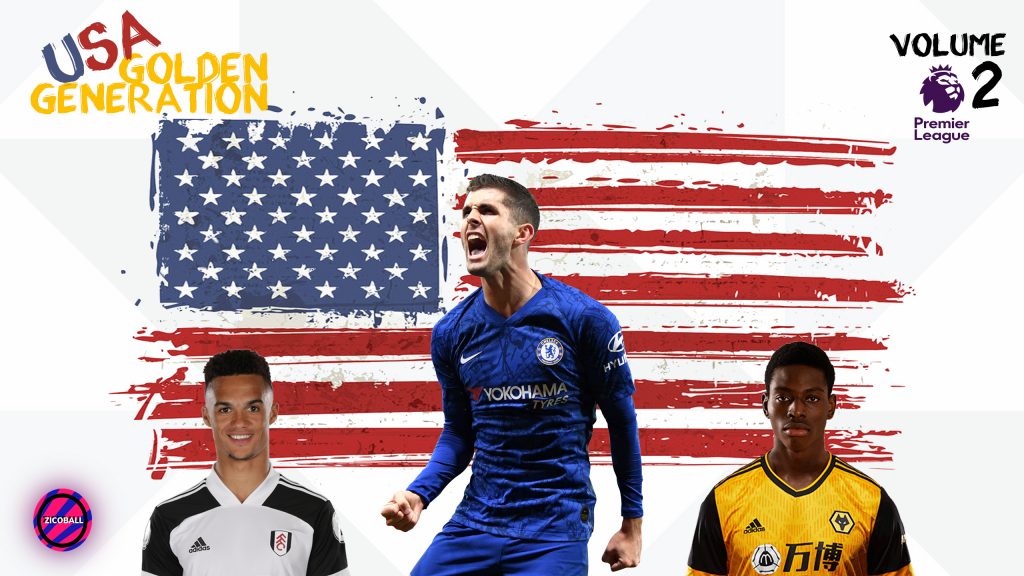 Here, we carry on from Part One of Bundesliga’s take on the US Soccer and its Golden Generation, and look a little closer to home…

As the next wave of generational US Soccer talent start to grace leagues across the world, a handful of Americans are beginning to shine through, competing with Europe’s best.

The time of Landon Donavon and Clint Dempsey has been and gone. Now, after missing out on the World Cup in 2018, the US Men’s National Team (USMNT) is spoilt for choice. So much so that the USNMT are favourites in North America to qualify for the upcoming Qatari tournament.

Across the pond, England has proven a favoured destination for players worldwide since the Premier League’s inception and has welcomed many US imports; 45 to be exact. Following in the legacies set by Tim Howard, Brad Friedel, and Dempsey will not be easy for the American prospects. Still, the future is bright for the USMNT in the league highly regarded as the best in the world.

So, which US-born talents have been able to thrive in England after arriving from the 50 states?

Captain America. Dubbed as the next captain of the USMNT, Christian Pulisic has become a fan favourite in his home country but honed his trade in Germany.

Pulisic found fame at the Signal Iduna Park and flourished whilst playing in the yellow and black of Borussia Dortmund. Following an impressive showing in front of the yellow wall, Pulisic made a big-money switch to England’s capital, joining Chelsea for an estimated £58 million in January 2019.

Scoring didn’t come easy for the Pennsylvania-born winger in Germany, scoring 29 goals in 155 games in Germany, but he was one of the team’s stars at the tender age of only 18 years old.

He also thrived on the international stage, becoming the youngest ever USMNT goal scorer at 17 years of age, alongside being the youngest USMNT scorer of a brace just a year later.

A strong dribbling attacker, with 3.2 successful dribbles this season, Pulisic has similar qualities possessed by superstars like Lionel Messi and Eden Hazard. He is equipped to thrive on the Chelsea wing, but injuries and belief have halted his progression.

With minimal game time this season, only two goal contributions have come from Pulisic. Unable to register the lofty numbers his form towards the end of last season suggested, it has very much been a case of a second season slump at Stamford Bridge for the former Dortmund man.

As a creative attacking player in Lampard’s system last season, Pulisic scored nine goals and laid on four assists in 25 league matches whilst also having a dribble success rate of 56.05%. Whereas this season, in 16 league games, Pulisic only has one goal and one assist his name, with a dribble success rate has dropped by 6.73%.

Injuries have stunted the growth of Pulisic at present, but past success and belief amongst fans the hierarchy and Chelsea should allow him to regain his form and show us why he is dubbed as the future of US soccer.

Antonee Robison is part of the new decade of defenders, the modern full-back.

A strong dribbler and attacker, Robinson thrives in Scott Parker’s back three set up at Fulham and has the capabilities to grow into one of the best full-backs in Europe.

Much like Bayern Munich’s Alphonso Davies, Robinson likes to get forward and offer an attacking, chance-creating threat but sometimes does lack the ability to pick out a final pass for an opportunity in front of goal.

Zero assists this season doesn’t help his cause, and with 10.9 inaccurate passes per 90 minutes, it’s a clear area Robinson will need to address and work under the tutelage of Scott Parker.

Six clean sheets in 20 appearances may not catch the eye of many, but in a Fulham side that has struggled heavily throughout the season so far, Robinson has been one of the stand-out performers at Craven Cottage. Strong defensive awareness and ball interception skills are just two of the factors that Robinson possesses already as he continues his development into a top-tier full-back.

With 1.9 tackles, 1.6 interceptions and 2.4 clearances a game, it’s clear to see that Robinson is an elite prospect for the USMNT defence and will be soon be adding to his eight international caps.

Born in the Big Apple, Owen Otasowie has finally found his groove, making the big step up to the Wolverhampton Wanderers first team and the USMNT.

The 20-year-old is a raw but excelling talent in England and will be a key part of the USMNT for the foreseeable future.

A product of both the West Ham and Wolves academy, Otasowie has the build and capabilities to grow into one of the best defensive players for the United States. His large stature and strength is his greatest asset, alongside his technique and calmness when on the ball. Growing up playing in the football cages of Peckham, the technical side of Otasowie’s game was nurtured from a young age, offering a style and grace when in possession.

Minimal game time at Wolves with a packed and talented midfield ahead of him has meant that viewers of the Premier League do not have a substantial sample size to recognise his talent just yet. However, with an assist in his Premier League debut and a USMNT cap already to his name, Owen Otasowie is one to keep an eye on.

A notable absentee from this list is Manchester City’s 25-year-old ‘keeper, Zack Steffen. As the USMNT’s first-choice keeper, Steffen found the spotlight in the Bundesliga, much like many of his compatriots, before making the switch to the Etihad Stadium in 2019.