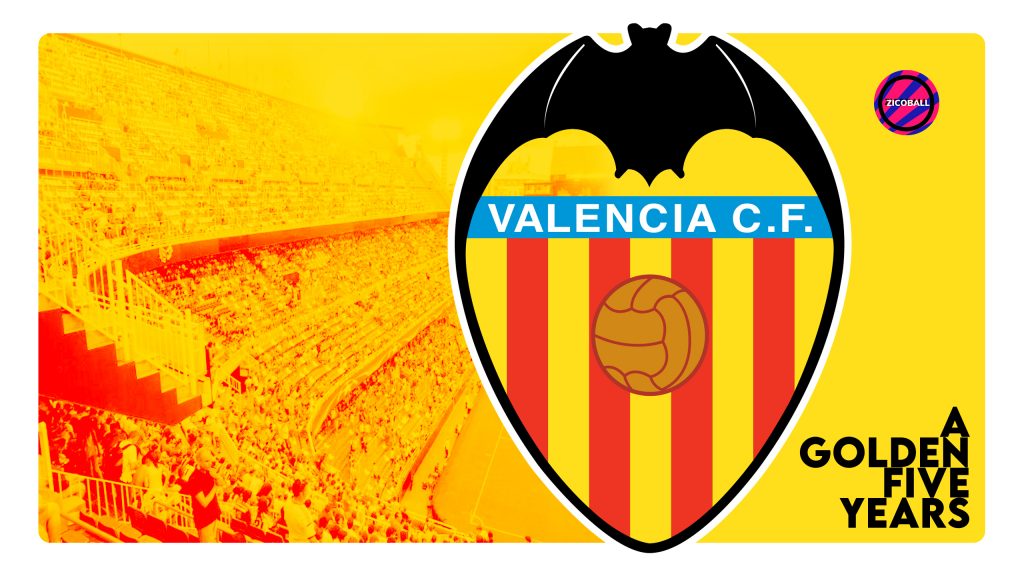 June 1st, 2004 – Rafael Benitez left Valencia Club de Fútbol after falling out with the club’s hierarchy. Two weeks later, he would become the manager at Liverpool FC, but his departure from Los Murciélagos (The Bats) would bring an end to a very successful period for the club.

From 1999 to 2004, Valencia were one of the top teams in Europe – winning six trophies and featuring in back to back UEFA Champions League finals.

But fast forward to today, and the club couldn’t be further away from their former glories, currently sitting in 14th in the La Liga table, eight points above the relegation places.

A team that has produced names such as David Villa, David Silva, Gaizka Mendieta, David Albelda, Isco and Jordi Alba, to name a few, has been on a steady decline since the mid-2000s in part due to debt accumulated by the club.

To understand the current plight of one of Spanish football’s top sides, we must look at their history and the period that defined them and conclude by analysing the years since their success.

The club was officially founded on March 18th 1919, with first president Octavio Augusto Milego Díaz elected via a coin toss. Valencia would move to their current home, the Mestalla, in 1923 – the year in which they would win their first Regional Championship, thus qualifying for the Copa del Rey.

Like most Spanish sides, Los Ches’s progression was upheld by the Spanish Civil War during the 1930s. But at the turn of the 1940s, they began to make up for lost time – winning the 1941 edition of the Copa del Rey against RCD Espanyol.

The following season saw the club win their first La Liga title, followed by success in 1943/44 and 1946/47. Nevertheless, these title’s weren’t deemed valuable during this period as the Copa del Rey was more reputable. Valencia’s 1941 and 1948/49 victories in the competition were viewed as more significant achievements.

Valencia wouldn’t repeat their feats in the 1950s, winning only one Copa del Rey in the 1953/54 season. The 1960s would springboard the club onto the European stage, with back to back Inter-Cities Fairs Cups in 1961/62, beating Barcelona, and 1962/63 overcoming Dinamo Zagreb – their first European silverware.

League form was somewhat indifferent during the 1960s, but Valencia added another Copa del Rey to their accolades in 1966/67 while also developing a reputation for attractive, attacking football.

1970 would see the club hire former Real Madrid legend and two-time European Footballer of the Year, Alfredo Di Stéfano, and he would inspire the side to clinch the 1970/71 La Liga title in his first season and the clubs first league title since 1947.

The title success would also grant Valencia access to the European Cup for the first time in their history, although they lost in the third round to Hungarian side Újpesti Dózsa in 1971/72. By the end of the 1973/74 season, Di Stefano had left the club to Sporting CP in Portugal.

The Bats claimed the Copa del Rey in the 1978/79 season, following that up with further success in Europe – beating Arsenal in the European Cup Winners Cup in 1979/80, although Di Stefano had returned for that season.

In November 1980, under the tutelage of Bernardino Pérez, the European Super Cup was added to Valencia’s growing collection – beating back to back European Cup winners Nottingham Forest over two legs.

During this period, the club had many notable players: Austrian midfielder Kurt Jara, Dutch forward Johnny Rep and Argentinian forward Mario Kempes, who was the top scorer in La Liga in back to back seasons in 1976/77 and 1977/78.

But the next 15 years would be some of the most troublesome in the club’s history.

The 1980s and the early 1990s were a disaster for Valencia CF, the highlight being La Liga runners up in 1989/90. Notwithstanding, the club’s darkest hour came at the end of the 1985/86 season when relegated – their first relegation after 55 years in the top-flight.

Relegation had appeared likely in the years leading up to the eventuality.

The 1982/83 season was spent fighting against relegation, barely finishing above the bottom three come the end of the season. Circumstances didn’t improve, and the following two seasons were spent in financial turmoil, with the club heavily in debt under then-President Vicente Tomo.

With players and staff going unpaid and a host of internal problems, it was hard to see a way back. Fortunately, a new President was elected over the summer of 1986 – Arturo Tuzón – and he helped guide the club back to La Liga at the first attempt, along with Di Stefano, at the helm for a third spell.

The subsequent ten years were spent rebuilding the club back up to its former glories. Although not achieving much, they did manage to finish 2nd in La Liga in 1995/96, while also finishing as runners up in the Copa del Rey the season prior.

But 1996/97 saw the club finish 10th, and they started the 1997/98 season poorly under Jorge Valdano. In came Claudio Ranieri, and this is where the period of success begins.

The beginning of the success

Ranieri was able to steady the ship at Valencia in the 1997/98 season, ending the campaign in a respectable 9th. At the end of that season, Los Ches were one of the three winners of the UEFA Intertoto Cup.

The end of season form was carried into the 1998/99 season, with the club finishing 4th achieving Champions League qualification and winning another Copa del Rey.

Ranieri would depart the Mestalla for defeated Copa del Rey finalists Atletico Madrid in the summer, with Héctor Cúper coming in as his replacement. Although Valencia’s most extraordinary period in their history came after Ranieri departed, no one can deny that if it wasn’t for his back to basics approach, the success they went on to achieve might never have been possible.

Ranieri’s success in the Copa del Rey final in 1999 was the first of six trophies that Valencia won over the next five years.

Cúper, who had just finished third with Mallorca, was brought in, and he oversaw a 4-3 aggregate win over Barcelona in the Supercopa de España before the start of the 1999/00 season.

That season saw the club finish third in the league, four points behind champions Deportivo de La Coruña and level on points with Barcelona.

But it was their performance in the UEFA Champions League that caught the eye, reaching the final.

Topping their first group, which consisted of Bayern Munich, runners up the year previously and then finishing second in the next group (the format at the time) behind current holder Manchester United, Valencia went on to beat Lazio and Barcelona to set up a final with Real Madrid.

The following season saw the club repeat the feat, navigating their first group with ease and then again meeting Manchester United in the second group, this time coming out on top. En route to the final, Valencia defeated Arsenal and then Leeds United, meeting Bayern Munich at the San Siro.

This time it wasn’t as one-sided, with the game going to penalties after it finished 1-1. Defender Mauricio Pellegrino was the only player to miss, with Bayern reigning triumphant 5-4 on penalties. Not only did Los Ches suffer agony in the Champions League, but they also missed out on Champions League qualification altogether on the final day – losing 3-2 to Barcelona – Rivaldo scoring a last-minute winner.

Following the season, Cúper left for Inter Milan, and a relative unknown was brought in as his replacement – Rafael Benitez.

Benitez had just achieved promotion after finished third in the Segunda División with Tenerife and had had little managerial experience in the top-flight of Spain. But it turned out to be an inspirational appointment as under Benitez, Valencia lost five league games in 2001/02 as they became Spanish champions for the first time since 1971.

The following season, in contrast, was a disappointment, with Los Murciélagos finishing fifth and were knocked out of the Champions League by Cúper’s Inter Milan.

Still, they were a side in transition.

Following their success in 2001/02, which had been built on a solid defence, much like Cúper’s side had been, Benitez wanted to add more goals. And it worked.

The 2003/04 season saw Valencia reclaim the title, scoring 71 goals and conceding just 27 compared to 51 and 27 in 2001/02. Before Benitez left for Liverpool that summer, he added the UEFA Cup to the trophy cabinet, the clubs first European trophy since 1980, after beating Marseille 2-0 in the final.

Los Ches were on course for their first-ever treble but were knocked out of the Copa del Rey in the quarter-finals by Real Madrid. Ranieri was brought back after his time at Chelsea. He oversaw the UEFA Super Cup victory in August against Champions League winners Porto – yet, Ranieri would only last until February 2005.

What followed & current predicament In Valencia

The years that followed Valencia’s golden period could best be described as hectic, with managers coming and going at an alarming rate.

Since the departure of Benitez, there have been no less than 18 different managers at the helm of Los Ches – all with differing levels of success.

While Ronald Koeman won the clubs seventh Copa del Rey at the end of the 2007/08 season, the team’s performances in the league resulted in him being relieved of his position – five days after success in the Copa del Rey.

Unai Emery came into the job for the following season, and to this day, has been the longest-serving Valencia manager since Benitez – spending four years at the helm.

With the revolving door of managers that has been present since the club’s heyday, it is perhaps easy to see why the club have struggled to replicate any form of success.

With another Copa del Rey added at the end of the 2018/19 season, under then-manager Marcelino, the Bats have continually been around the Champions League positions with the odd while also recording back to back league finishes of 12th in 2015/16 and 2016/17.

But it was, in fact, the extensive debt that the club had again accumulated that was the overriding factor in the limited success they have had.

Debt in the region of €400m meant that Valencia often had to offload their prized assets.

Victims of this included David Villa, sold to Barcelona and David Silva, sold to Manchester City in 2010, and a year later, Juan Mata was sold to Chelsea to help further balance the books.

Los Murciélagos did manage to decrease the club debt and by 2014 were under new ownership, Singaporean businessman Peter Lim. Since Lim’s arrival, the club has gone through nine different managers, and by the 2020/21 season, Valencia again had accumulated a mountain of debt, this time in the region of €323m.

Following the years of mismanagement, the playing squad was cut significantly in quality and often for half or less of their market value. Club captain Dani Parejo was allowed to join Villarreal on a free transfer, with local wonderkid Ferran Torres sold to Manchester City for around £21m.

The current playing squad is full of prospects and reserves after Los Ches failed to sign a single player over the summer transfer window. This inactivity has left the club fighting relegation for large parts of the season and find themselves in 13th, nine points above the relegation places.

At the current rate, it is hard to see Valencia ever reach the heights of 1999-2004 again unless they sort themselves out financially and apply a clear strategy to get the club back to the top end of La Liga, competing towards the very end of European competitions once again.

Will Valencia be another name added to the list of European giants that have fallen?

This is, once again, a tale of financial mismanagement at a top club. It often ends up being too late when the eventual demise is realised.