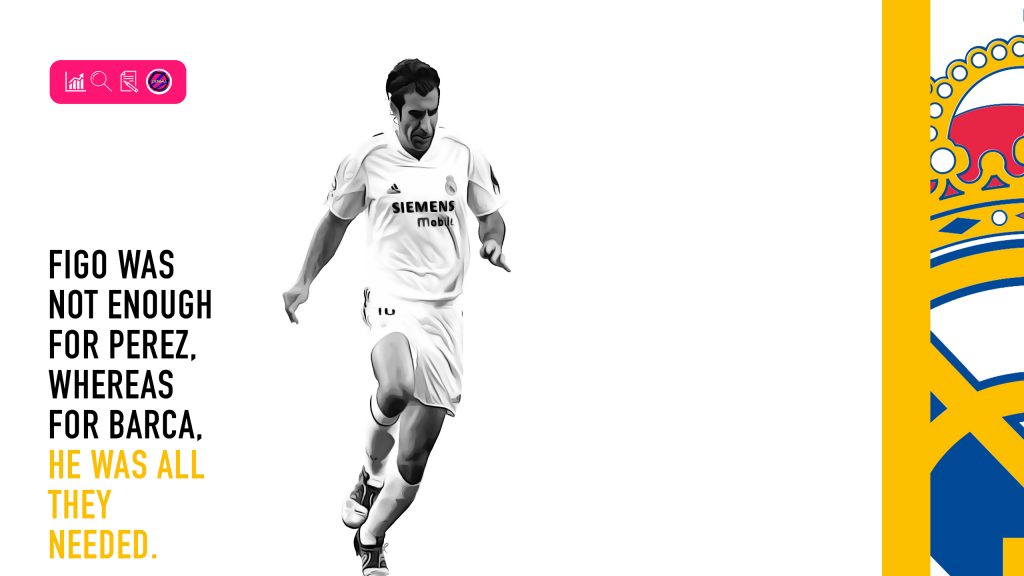 An autumn fixture in 2002 between Barcelona and Real Madrid at the Camp Nou; by now, the story is well told. Luis Figo is harassed from the rows of one of sport’s great colosseums, and missiles rain whenever he dares venture too close to the pitch’s edge. The infamous severed pig’s head lies feet from Figo’s T90s, the ultimate symbol of hatred and disrespect.

This story is well versed in the lore of Spanish football, and pays as a warning to those who wear both jerseys of Barcelona and Real Madrid. Yet, perhaps this tale ignores what happened to Figo as a player in this move, and whether the destruction of his reputation as a chosen son of Catalonia was truly worth it.

It must first be noted just how adored Figo was at Barcelona. He played there for five years between 1995 and 2000, joining from Sporting Lisbon, as a creative midfielder who preferred occupying central spaces behind the striker. However, Barcelona have traditionally played without such a central creator, instead preferring to play with three highly adept passers in midfield, with creativity coming from wide.

The club’s beloved son, Pep Guardiola, would command one of these positions, and Luis Enrique would regularly occupy another. Enrique had interestingly enough joined Barcelona having played in Madrid for five years.

Figo was never designed for such a role; his USP was his dribbling. A home was found for him on the right-wing. This suited his incredible two-footedness that enabled him to shift the ball from foot-to-foot, and fly down the outside and cross, or jerk inwards and shoot at goal.

Cruyff’s move to position the young playmaker on the wings continued the club bloodline of creating from wide, just as Cruyff had done in his years at the Camp Nou. Whereas the Dutchman’s sleight of touch and tight ball-control was his trademark, Figo’s dribbling and youthful pace, was coupled with a strength and barrel-chested physique that made him frighteningly powerful.

In a 1999 Champions League fixture against Arsenal, Figo sees the ball drop facing his own goal, within his half. He was pressured by Nigel Winterburn and Patrick Vieira, the latter being of unmatched physicality amongst European midfielders at the time.

Figo firstly shrugs off the lunges of Winterburn to send him to the ground, before waiting for the two to converge and flicking it between them. All this is done while facing his own goal, under pressure from two pressing opponents. Yet, Figo’s awareness allows him to use Winterburn’s weight against him and use the deception of his position on the pitch to roll both of their tackles. It is a remarkable piece of skill that looks so simple you’d be forgiven for missing it.

The sideways shuffle with which Figo moves the ball, and the weightlessness of his running, mirrors clips from a highlight reel of one of Barcelona’s past adopted icons. Were the pictures grainier, and the player shorter, the footage could be of one Diego Maradona.

The nutmegs and quick foot movement are impressive, however, it is the directness and power of Figo that is most striking when watching him. When this running ends in a rasping drive at goal, often with his supposed ‘weaker’ left foot, Figo’s threat and ability takes on even further meaning of just what a player he was.

In the same season as that Arsenal fixture, Barcelona played away at Fiorentina, in the same competition. The game ended in a thrilling 3-3 draw. Figo levelled the scoring on 20 minutes, wrestling the ball amongst three Fiorentina players. Figo then flicked the ball with the outside of his foot and drove at goal, before lashing in at the near post.

Five opposition defenders attempted to stop him in his run, yet the power of the surge, followed by the shot, dismissed their efforts as churlish. This goal aside, Figo tormented the Italians taking up position on the left of the field, standing them up and feigning his direction to float crosses in all game.

As captain in his latter years at the club, Figo had been taken in as the club’s reverent son. Barcelona’s history is littered with such characters; Johan Cruyff, Figo, Ronaldo, Rivaldo, Ronaldinho, and Lionel Messi, are just a few. All are players brought to Catalonia from foreign lands with an intrinsic understanding of what playing for Barcelona means. More than winning, it is about how one plays, and the ease they exude while playing in the maroon, blue and gold.

Figo personified this, and for him to be wrenched away by their rivals was understandably heart-breaking for those that loved him so. The story then turns sour, of course.

Real presidential candidate, Florentino Perez, vows to sign Figo as his first act as President. He wins the vote, Figo’s contract negotiation with Barca had stalled, and Real come in with a world-record €62m bid which is accepted.

The Portuguese galactico swapped the blue and maroon, for white and navy. Just months after moving to the capital, Figo stands on the turf of the Bernabéu holding the Ballon d’Or as the world’s best player; work that was primarily attributed to that of his former home.

Figo was the first of the marquee ‘galactico’ signings under president Perez. Zinedine Zidane would follow the next year, usurping the Portuguese as the most expensive player of all-time. A year later, Ronaldo would arrive on the back of five injury-ravaged years in Milan. David Beckham was next, followed by Michael Owen of Liverpool. One of the world’s best players was signed every summer during this period, regardless of their position or form.

Real Madrid would win two league titles in Figo’s first three seasons, albeit with relatively lowly points totals of 80 and 78. Deportivo la Coruna and Valencia were the chief rivals in La Liga at the time. Barcelona were wallowing in Louis van Gaal’s miserable second reign, and the heartbreak of Figo’s departure was still felt.

Los Blancos won the Champions League in 2001/02, with the memory of victory etched into the laces of the great Frenchman, Zidane, and his wonderful volley to win the final.

Perhaps pertinent, Figo was removed on the hour mark to be replaced by Steve McManaman, a predecessor of the pre-Perez ‘galactico’ era. Figo would undergo ankle surgery that summer following the World Cup.

Figo was quite obviously a cog in a costly machine. Signed as the world’s best, he now had to watch his stock diminish whenever a newer, more expensive item, was placed alongside him.

The attacking nature of these players affected Figo’s play. The arrivals of Beckham and Zidane especially, hindered Figo’s natural style. At Barca, Figo would fly inside and outside of the left-sided full-back, and also pop up across the attacking line, to utilise his creative powers and unique two-footedness.

At Real Madrid, this midfield would contain Zidane; a floating, roaming playmaker who required complete positional freedom to influence games, Beckham; a right-sided crossing merchant, and Raul; a predatory forward deployed as a ’10’ behind Ronaldo.

Put simply, the areas and positions occupied collectively by Zidane, Raul, and Beckham, were those that Figo had once enjoyed at Barcelona. Now he had to fight for relevance amongst this crowded surplus of talent. This is not to say that Figo did not perform at Real, but it is understandable that as the years rolled by, he attempted his trademark dribbles and runs less and less. His USP was now fading.

Age, of course, is a contributor, as is the ankle surgery he underwent in 2002. So often one saw him occupying central spaces, but much deeper than a player of his attacking talent should need to. Figo regularly sought Claude Makélélé to receive the ball from deep as if he had to search for possession to make his mark.

Another indicator of just how the effectiveness of Figo had changed is in his goal numbers. He managed 56 goals in Madrid, compared to his 45 at Barcelona. However, of these 56 goals, 31 were penalties. At his former club, only one of his finishes were from the spot. This shows that while Figo was perhaps playing clinically, and stepping up to score penalties, the pure joy in his game of burning defences before rocketing at goal, had gone.

The Clásico of 2003/04 at the Camp Nou sums up Figo’s experience at Madrid. One moment of brilliance saw him find Roberto Carlos on the left-wing. Figo found the Brazilian with a launched pass, as the ball slid out of play, before Carlos squared to Ronaldo to finish. Real Madrid won 2-1, yet Figo’s presence is not prominent. He pops up on the left, right, and deep centrally, but always seems to be treading on the toes of one of Beckham, Zidane, or Raul.

Zidane’s license to roam also sees Figo following his shadow so as not to leave the full-back exposed. Was this why Figo was signed? To play as second, and even third fiddle to others? Real’s victory in this match furthers this point; that Figo’s flashes helped contribute to relative success, however a fit and firing Figo with more of a chance to showcase his undeniable talent, may have carried them even further.

Figo eventually left the Spanish capital in 2005, aged 32, to join Inter Milan. His record for both Barca and Real is almost identical; 248 games to 245, 45 goals to 56. Two league titles at the Camp Nou, two at the Bernabéu. The Champions League victory in 2002 is the standout when comparing the two, but Figo’s role in the final may perhaps affect the significance when looking back at his career. So, was the Figo of Barcelona worth replacing with that of Real Madrid?

Stylistically, no. The player that won the heart of Catalan was everything Barcelona purports itself to be; to win with style and class. Ultimately under Louis van Gaal, Barcelona were on the road to mediocrity, and it was only Figo and Rivaldo that sustained any image of them being the mighty club they are.

Figo won the Ballon d’Or at Madrid, and the Champions League, but his prominence as a player, and as a figure, faded as Perez assembled his extravagant collection of pawns.

Figo was not enough for him, whereas for Barcelona, he was all they needed.