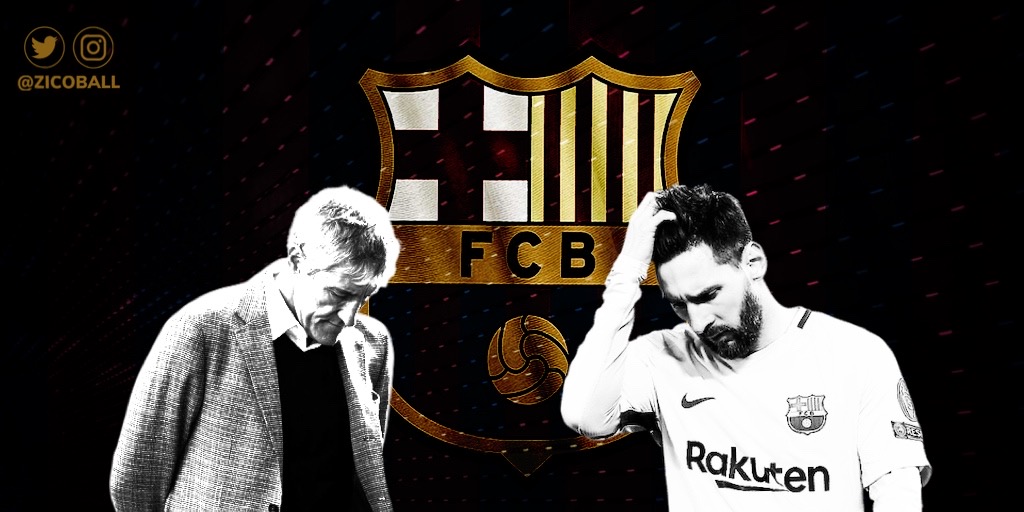 Many highly-anticipated matches fail to really live up to the billing. We may remember a piece of individual brilliance or a bizarre mistake, but few events will be remembered forever. Bayern Munich’s thumping win will never be forgotten, and Football Club Barcelona will never be the same again.

As soon as the final whistle blew and one of the biggest humiliations in sporting history was complete, social media went crazy. Most supporters were asking for Quique Setien to resign. Fans were blaming the players, and some were calling for Lionel Messi to move to a different club as he was deserving of silverware. Barcelona’s board was questioned, and some went as far as to say that the fading Catalonian superpower should end their obsession with possession-based football.

It was a historic defeat. Bayern Munich were sensational, but the signs of this crash have been there for years. The writing has been on the wall for some time.

Let’s take a more in-depth look into reasons why the five-time European champions not only lost so badly, but why the immediate future is a worrying one for anyone affiliated with the club.

Gennaro Gattuso, the Napoli coach, perfectly summed up Barcelona after his team’s round of 16 game at the Camp Nou. Gattuso spoke of how he didn’t recognise this Barcelona side. He compared Barça’s pressing to when he played against them with AC Milan. Barcelona used to attract the very best players in the game, but as Gattuso said, this Barcelona is almost unrecognisable.

Let’s cast the microscope onto Barcelona’s recruitment since 2017, when Neymar left for Paris Saint-Germain. Barcelona have spent €767 million on new signings. Only Frenkie De Jong and Clement Lenglet have looked like suitable investments.

Barcelona paid €394 million to acquire Philippe Coutinho, Grizemann and Dembele, yet none of them started in the Champions League quarter-final. This is the definition of poor recruitment.

The humiliation in Portugal was due to below-par tactics, and it’s likely Bayern would have won even if Coutinho played for the Spaniards. The point being is that Barcelona paid €150 million to sign a player who scored twice against them. With better management, Coutinho, now in the prime years of his playing career, would have been desperate to save Barcelona rather than humiliate them further.

In the last three seasons, only Messi and Luis Suarez have scored more goals for Barcelona than Coutinho’s 21. Furthermore, the Brazilian only played one full season at Barcelona before getting loaned out to Germany. Not every player hits the ground running immediately, especially at the biggest clubs.

Look at the signing of Antoine Grizemann, for example. Barcelona openly chased the Frenchman, but they failed to find a suitable position for him. €120 million prised him from Atletico Madrid, yet he started on the bench versus Bayern.

You might recall that Paris Saint-Germain were ready to sell Neymar Jr in the summer. The Brazilian wanted to go back to Spain, and the two clubs had formal meetings. Barcelona did not have the transfer fee readily available, but if they had a plan in place, they would have been able to sign the want-away samba star.

Did you see Neymar’s performance against Atalanta in the first Champions League quarter-final? Imagine if he was playing alongside Messi. The German champions would not have been so aggressive with their pressing as they would not risk getting exposed against such a dangerous attack on the counter.

Griezmann is a fantastic player; he is a World Cup winner. However, he has struggled because Ernesto Valverde and Setién play him out of position. In comparison to Neymar Jr, Grizemann has registered 15 goals this season to Neymar Jr’s 19 goals and 11 assists.

Barcelona once boasted the likes Xavi Hernandez, Andres Iniesta, Carlos Puyol, Thierry Henry, and David Villa. The evidence of the modern-day recruitment process is there for all to see. In the last few years, Barcelona have loaned Kevin Prince Boateng, brought in Paulinho from China, spent astronomical amounts on Coutinho and Dembele, who rarely feature, and essentially swapped Arthur for an ageing Miralem Pjanic. The board are clearly not learning any lessons.

Has this Barcelona board wasted the best years of Messi’s career? Some of Messi’s harshest critics are asking “if he’s the greatest player ever, then why has he won just two European cups since 2011?”

As Bayern showed us against Barça, and as RB Leipzig demonstrated against Atletico Madrid, football is a team sport. You can lean on your best player for the majority of the season, but well-drilled teams will overcome that, and likely beat you in crunch games.

Barcelona have been over-reliant on Messi since the departure of Neymar Jr in 2017. Messi has registered 127 goals and 65 assists in the last three seasons, and that is despite having to drop deep because of the lack of creativity currently at Barcelona. Barça’s next top scorer is Luis Suarez with a respectable 77 goals in three seasons. In the two La Liga winning seasons, Messi contributed 90 goals and 26 assists in the league. It is suggested Messi’s production dropped this season and that’s why Barcelona lost the league crown.

But, in reality, Messi still finished as the leader in goals and assists in La Liga. He had 46 direct goal involvements, the same as the triumphant 2017/18 season. Out of the 275 goals scored by Barcelona in the last three league seasons, Messi has scored or assisted 162 of them. In contrast, Ousmane Dembele has registered 19 goals in three seasons and was signed for €122.5 million. Such stats highlight the weight of Messi’s importance to Barcelona.

Maybe if Messi’s all-time greatness wasn’t hiding the flaws and papering over the cracks, Barcelona would not have thrown away a three-goal advantage in back-to-back Champions League seasons. The Argentinian carried an unstable team to the Champions League semi-final last season. They took a 3-0 lead against Liverpool, the eventual champions. However, as the saying goes in sport; ‘players win games, teams win championships.’

The thing about teams with deep-rooted flaws is that when they fall, they fall hard. Barcelona, as we saw, were no different. The flawed hiring for the Camp Nou’s managerial post should be questioned.

Valverde came in as Luis Enrique’s replacement in 2017. Valverde was seen as a safe choice rather than someone who would turn heads and excite the fans. The Spaniard oversaw the two humiliating Champions League eliminations against Roma and Liverpool, yet the board stuck with the coach.

Aside from the eliminations in Europe, Valverde’s Barcelona was often uninspiring and lethargic. His team was too dependent on Messi to score or create for others. Barcelona were dominated in games, something alien for the club, but they were often able to scrape out wins via individual brilliance.

Valverde did win the 2017/18 and 2018/19 La Liga titles by over 15 points. Although, the football on display wasn’t what the fans were used to. If you removed Ter Stegen and Messi from the side, they would have struggled to qualify for the Europa League. A far cry from the days where the Camp Nou dressing room was littered with superstars in their prime.

Valverde should also be held accountable for Coutinho’s three-goal involvement in the 8-2 loss to Bayern. The Brazilian was signed in January 2018 and Valverde could not find a suitable position for him. If Coutinho had signed for a Klopp or Guardiola side, you can be sure they would have found a spot for him at that price, and they would have made it work. The former Barcelona coach struggled to get the best out of Coutinho, who arrived for an eye-watering fee and was Liverpool’s best player for a number of seasons before moving. Coutinho was subsequently loaned to Bayern by Valverde.

The Brazilian was deployed as a forward from the righthand side or as a wide midfielder in Valverde’s 4-4-2. Yet, if we look back at Coutinho’s best performances for Liverpool, he was playing behind the front three. Barcelona failed to utilise the Brazilian, he felt unloved, and his anger was evident in his Portuguese cameo. The axe fell on Valverde after the 3-2 loss against Atletico Madrid in the Spanish Super Cup, much to the supporters’ delight.

Quique Setién was drafted in as a replacement. The hope was that he could bring back a much-coveted possession-based approach to Catalonia. Barcelona were leading La Liga at the time, but here we are in August, trophy-less and with morale on the floor; eliminated from the Copa Del Rey by Athletic Bilbao, lost the La Liga title to their fiercest rivals, and got thumped by Munich’s best.

Without doubt, Setién was the main culprit for Barcelona’s humiliation. Setién seemingly studied Bayern’s brilliant pressing and thought about ways to counter it; either create a system where the team does not get trapped in the opposition’s pressing or bypass the press and distribution it long to the strikers.

Bayern pressed in a 4-2-4 or a 4-4-2 with Thomas Müller joining Robert Lewandowski. Setién should have instructed Sergio Busquets to drop deep between the centre-backs to create a 3v2 advantage to smother ball progression. Setién could have attempted to target the space behind Bayern’s ridiculously high defensive line. The most baffling thing about the 8-2 loss was that Barcelona did not change their approach.

Six out of the eight Bayern goals came by forcing turnovers high up the pitch. Bayern were terrific, but Barça did this to themselves.

SOLUTIONS FOR THE FUTURE

The reaction from Barcelona fans regarding club President, Josep Maria Bartomeu, Sporting Director Eric Abidal, and the coach, is that they should all be shown the door. Recent history and the football on display would show this to be a wise course of action. Aside from the politics found in the board room between the head-honchos at the club, the playing-staff also requires a revamp.

Ageing players including Gerard Pique, Busquets, and Suarez should be moved on. The changing of the old-guard needs to happen, and the wage bill has to be slashed in order to get in their desired targets.

Barcelona should stick with their possession-based style of which they are so accustomed. Hiring and recruitment need a different approach, with an importance placed on youthful quality and coaches with the pedigree and capabilities to fulfil Barcelona’s expectations.

The club’s style has inspired football clubs and its coaches all over the world. Their philosophy did not fail against Bayern; however, their coaching and defending did. The likes of De Jong, Dembele, Coutinho, and Grizemann, came to Spain because of the pedigree and history of the club.

The La Liga giants will not have problems attracting the best talent in the game. Find a coach who will make this side a team less dependent on their diminutive superstar and the other older heads, and it may just kickstart a revival.