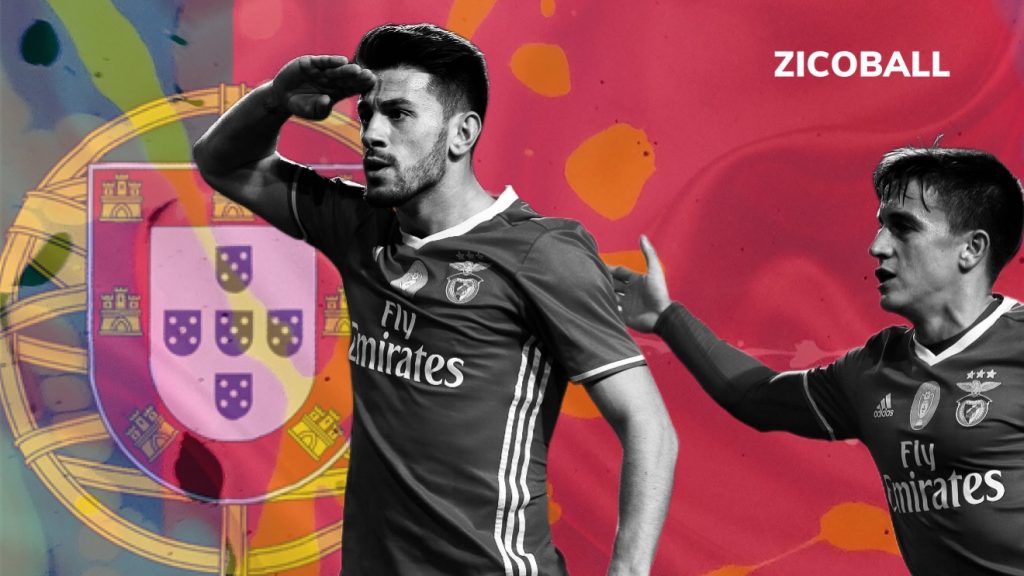 With a thrilling title battle on the cards, places in Europe up for grabs, and stars of the future on display, it’s a must-watch.

Liga NOS will broadcast on free-to-air FreeSports TV, so it’s easy to access, and won’t cost you a penny.

The Sprint for honours

All sides have ten matches remaining, and the fight for the league title is tantalisingly close. Porto lead arch-rivals and defending champions Benfica by a single point. In recent history, the two powerhouses of Portuguese football have claimed the league title in each of the last 17 seasons.

Benfica have hit a purple patch in terms of titles, gaining the upper hand on their fierce rivals by winning five of the last six championships. This season, it is the Dragons who hold the advantage, albeit an incredibly slim one. The two most successful clubs in the country’s history both originate from the two biggest cities, boasting huge fanbases.

Intriguingly, Porto and Benfica don’t play each other again this season. The run-in won’t centre around the anticipation of one match; all fixtures will be equally as important.

Porto fans will be buoyant having watched their team prove victorious on both occasions against Benfica. Way back in August, goals from strikers Zé Luís and Moussa Marega, helped silence the majority of fans inside the Estádio da Luz. Benfica failed to capitalise on enjoying more of the ball, producing a lacklustre performance in front of goal. Benfica were unable to register a single shot on target from the four they mustered during the game.

February’s encounter between the two sides was a more exciting end to end spectacle that produced five goals. Sérgio Oliveira put the hosts ahead with an acrobatic effort after ten minutes. Oliveria’s goal was swiftly cancelled out by a Carlos Vinícius tap in; the Brazilian reacting quickest to Agustín Marchesín’s parry to jab home the loose ball.

Porto then struck twice in quick succession just before half time. Alex Telles’ penalty kick restored their lead before a Rúben Dias own goal gave Porto a two goal cushion. Despite Vinícius’ second goal of the evening five minutes into the second half, Benfica were unable to find an equaliser, and left the Dragão empty-handed.

The foundations to this title race are firmly set, with the finishing touches likely to be compelling. The Liga NOS outfit which puts together the best sequence of results from the remaining games, will reign supreme.

Below the top two sides, several interesting battles are taking place. Braga are third and on-track for their best league finish since 11/12. However, nipping at their heels are fourth-place Sporting Lisbon who are only four points behind. Again, Sporting and Braga don’t have to play each other, but they are both set to face one of the title-chasing sides on the final day.

Braga play Porto while Sporting play crosstown rivals Benfica. All four sides could end up needing a victory for differing reasons, culminating in an incredible finale. Sporting are poised to play a significant role in deciding who is crowned champions as The Leões also face Porto in the remaining ten games.

Third position is a coveted spot in Portugal’s top tier as it guarantees entry into next season’s Europa League at the group stages. The fourth-placed side enters the competition in the third qualifying round, a tricky prospect indeed.

Although it will be tough for whoever triumphs in the war for fifth, the opportunity to experience European football would be enough to make it worthwhile. This feat would be extraordinary if it were to be Famalicão. Newly promoted, this is their first season in the Primeira Liga since 93/94 and only their eighth in total. As recently as 08/09, Famalicão were plying their trade in the fifth tier of Portuguese football. These days, they are fighting for the right to play in Europe.

Alongside the additional revenue, the fifth-placed team will, of course, be able to attract a higher calibre of player for next season, with the offering of European football. Make no mistake, the race for fifth matters.

The country’s showing in Europe this year, pre-COVID-19 has been relatively disappointing. Benfica were the only side present in the group stages of the Champions League as Porto lost their qualifying tie. However, Benfica failed in making it out of a tight group after claiming seven points and finishing third to Lyon in second. Pipping Zenit Saint Petersburg to third-place on head-to-head goal difference allowed Benfica entry into the knockout stages of the Europa League.

In the group stages of the Europa League Portugal were represented by Porto, Sporting, Braga, and Vitória de Guimarães. Braga was the most impressive by far, remaining unbeaten while topping a group which included the Premier League’s Wolverhampton Wanderers. Porto followed Braga in winning their group, beating Rangers by a single point.

Sporting could only advance as runners up in their cohort behind Austrian side LASK. For Vitória de Guimarães, it was a more chastening experience. They propped up a tough group that included Arsenal and Eintracht Frankfurt, recording just one win in the process.

All four sides promptly exited in the first knockout stage. Sporting and Benfica were the unluckiest, falling to one-goal losses of the same score. İstanbul Başakşehir saw off Sporting 4-1 in the second leg, registering a 5-4 win on aggregate. Benfica were also edged out 5-4 by fellow Champions League dropouts Shakhtar Donetsk after a thrilling 3-3 second-leg.

A plucky Rangers side upset Braga 4-2 while Porto received a 5-2 smashing from an impressive Bayer Leverkusen.

What had looked like a competition that Portugal could go deep in, turned into somewhat of a disappointing anticlimax.

Crunch-time at the foot of Liga Nos

At the bottom of the table, things look a bit more clear cut sadly for the two teams occupying the relegation zone: Portimonense and Aves. The former are six points from safety and have only won two league matches all season. Aves are nine points adrift having lost 19 of their 24 games thus far.

It’s not impossible for either, or both, to survive, especially if they get positive results in their first two matches. Portimonense have more reason to believe, having only appointed manager Paulo Sérgio in February, before the league suspension.

With two months to conjure up a way of turning things around, the former Hearts manager’s fresh outlook and belief may encourage his side to fly out of the blocks, and pile pressure on the teams above them.

Portimonense and Aves meet on the final day which could play out to be quite a game if either side has pulled themselves back into the fight.

Will we see a great escape in the coming weeks?

Liga Nos is host to an array of talented individuals who can be found strutting their stuff up and down the country. Benfica midfielder Pizzi has caught the eye all season long, registering 14 goals, and eight assists. His fruitful haul puts him top of the league’s assists charts and second in the race to be top goalscorer; one behind his teammate Carlos Vinícius.

Vinícius has been extremely impressive so far this season. The Brazilian, who turned 25-years-old during the lockdown, has been in lethal goalscoring form; netting 20 times in all competitions already. From this early impression, he looks worth every penny of the smidgeon over £15m the club paid Napoli for his services.

Another striker who looks worthy of his transfer fee is Porto’s Zé Luís who has found the net seven times from 12 league starts. Unfortunately for Porto fans, injuries have severely impinged upon Zé Luís’ season, forcing him to miss a third of Porto’s league games so far this term.

Of course, not all transfers work out positively, Benfica can attest to that. A significant transfer which took this route came in the shape of Raúl de Tomás. Real Madrid received £18m, the most substantial fee spent by any Portuguese side in the window. The striker never settled in Lisbon, managing just three goals in 17 games, and was consequently sold to Espanyol in January. Funnily enough, he’s proving quite the hit in Spain.

Across Europe’s top leagues only Lionel Messi is currently on track to top both goals and assists tables. If Benfica’s Pizzi managed to replicate the Argentinian, it would be a massive achievement that could create some transfer interest in the 30-year-old.

If Pizzi catches the eye of a top European team off the back of his season, he certainly wouldn’t be the first player from Portugal to star on the big stage. Five-time Ballon d’Or winner and current Juventus forward Cristiano Ronaldo made his name at Sporting Lisbon before attracting attention from Sir Alex Ferguson in 2003. Fellow Champions League winners Luis Figo, Deco, Jose Bosingwa, Nani and Ricardo Carvalho, to name a handful, spent periods of their playing careers in the division.

The Premier League hasn’t been the only destination for upcoming shining lights in Portugal. Angel Di Maria, João Félix, and Axel Witsel have all carved out impressive transfers away from Liga NOS.

If you want a place where you can watch the talent of tomorrow, today, Liga NOS is undoubtedly the league for you.